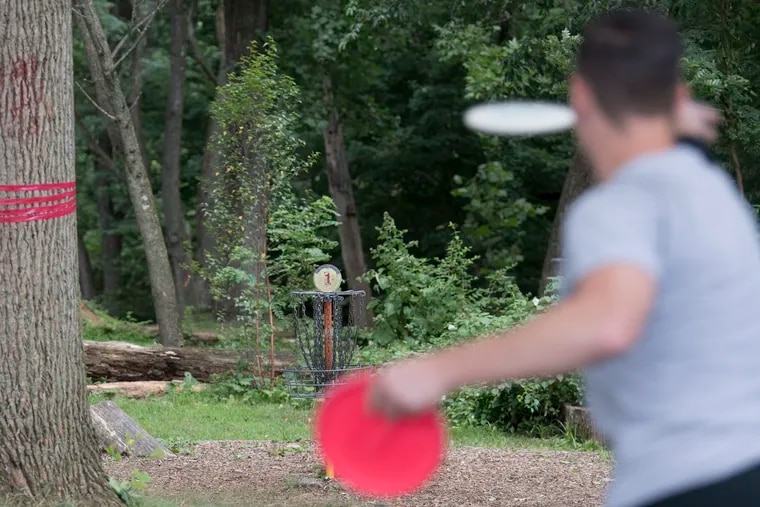 When you feel like you’ve done all the hikes, seen all the waterfalls, done all the fancy day trips, and visited all of the wineries, breweries and distilleries in the area, it’s definitely time for a new hobby.

May we suggest disc golf?

You’ve probably at least heard of it, or maybe seen people throwing brightly colored plastic discs through the woods in your local park at a strange looking target with noisy chains. It is – and it’s mostly not as strange as it sounds. And almost everyone can play.

Simply put, disc golf is basically a mix of frisbee and golf, but with special discs instead of golf balls and clubs. But the goal is still the same: make it from tee to target – in the case of disc golf, the basket – in as few moves as possible.

Besides, it’s not exactly new. Disc golf as we know it actually dates back to the early 1970s when it emerged as an organized sport – and the first official disc golf course was founded in California in 1975, according to the Professional Disc Golf Association. Today there are thousands of courses across the country.

But how exactly do you play disc golf and where can you play it in the Philadelphia area? Here’s what you need to know:

Each hole starts at a tee from which you make your first throw towards the basket, and some courses have multiple tees for different levels of difficulty. In many places, these areas are paved, grassed, mulched, or otherwise marked to define their boundaries that you must stay within while throwing. Wherever your disc lands, take your next shot.

Some courses also have “Mandatory” or “Mandos” where you have to throw your disc past a specific side of an obstacle (like a tree or bush) and if you don’t you have to throw again. Throws out of bounds – such as those that are lost on a lane, in a water feature, or completely – also require re-throws.

When playing in a group, whoever is furthest from the basket after teeing off throws first in the rotation. Each throw counts as a stroke or point, and whoever has the fewest strokes at the end of the current hole throws the next hole first (you move to the next hole after everyone has put their disc in the basket). The person with the lowest total number of strokes at the end of the game is the winner.

Of course, there are other, more complicated rules for official or tournament play, but these should get you started with a good recreational game.

There are few different ways to throw, but beginners should first learn to throw “backhand”. This throwing style is a bit similar to a traditional Frisbee throw, in which you let go of the disc as your arm moves across your body.

Put your back, torso, and legs in for faster throwing, shifting your weight from the back foot to the front as you go. To keep the throw straight, keep the leading edge of the disc flat and level in your hand. Of course, all of this is easier said than done and can get more complicated as you gain experience – but don’t despair.

If you need help, ask the course location or visit YouTube. Brands like Discraft, Dynamic Discs and Innova all have channels with in-depth video tutorials, as do professional players like Brodie Smith, Holly Finley and Scott Stokely. Other great resources are JomezPro, Robbie C. Disc Golf, and Disc Golf Nerd, though the list is endless (and for great tournament coverage, check out the Philadelphia-based Gatekeeper Media).

At the simplest level, all you need is a disc. The discs differ from normal frisbees: they’re made of sturdier plastic, have a specific weight of around 120 to 180 grams, and have a smaller diameter to move them further. There are four main types:

Each disc moves slightly differently and has a specific application – but at the beginning it is probably easiest to start with puttering or midrange discs. Overall, these discs tend to glide straighter and are easier to control, but they don’t fly as far or as fast as the distance-based models – which makes them ideal for learning the basics.

There are a ton of places to order discs online. But in the Philly area we happen to have a few disc golf shops like D-Town Disc Golf (Doylestown), Discinsanity (Allentown), and Cosmic Disc Golf (Cherry Hill, NJ), as well as some, uh, “smoke shops” – like Frolic in Exton – carry the disc golf equipment. You might also find them at some chains like Dick’s Sporting Goods, REI, and Play It Again Sports. And some courses have disc sales or even rentals on certain days of the week.

There are approximately 200 disc golf courses in Pennsylvania alone, many in state or city parks, according to the Professional Disc Golf Association. So you shouldn’t have too much trouble finding one. And as a bonus, most of them are free to play.

Before you go, there are safety and etiquette tips from the State Department of Conservation and Natural Resources, including:

With these tips in mind, you should be ready to have a great game of disc golf. Here are some regional courses to try on your trip:

Founded in Fairmount Park in 1977, Sedgley is one of the oldest disc golf courses in the country and the OG course for the Philadelphia area. Here you will find 27 holes that meander through forests and meadows. Holes 19-27 (the “back nine”) are on the hard side and often less crowded than the first 18, so check these out if you’re looking for a real challenge. 📍 33rd and Oxford Street.

Stafford is an essential course due to the variety of the game on its 18 holes, which range from densely wooded to wide fields. A favorite here is hole 16, which has a basket hanging from a tree as a target – but watch out for holes 3 and 7 where you can shoot over small ponds so don’t lose your disc (don’t worry, you can around the pond mess around if you’re worried). 📍 2201 E. Evesham Rd., Voorhees Township, NJ

Established in 2019, Alcyon is one of the newer courses in the area, but still a good – and challenging – 18-hole course. Pretty much all of the holes here are heavily forested, which, while tough, can help you improve your precision (and maybe teach you a thing or two about patience). Plus, it’s a relatively hilly course that is sure to get a good workout out of it. 📍 98 Track Ave., Pitman, NJ

Fort Washington began as a nine-hole course nearly 20 years ago but has since been upgraded to a full 18 holes. This is a challenging, moderately wooded course, and with two baskets per hole (one short, one long) it offers plenty of play options and can still be a new experience as your skills grow. Take your time – it’s easy to lose discs in the underbrush if you deviate from course. 📍 500 S. Bethlehem Pike, Fort Washington

This cool Camden County spot was supposedly once home to an old ball golf course, but now the discs have taken over. Its 18 holes are well suited for beginners thanks to their mostly flat, mostly open layout – especially the first nine holes, which are on the shorter side. But if you’re looking to expand your skills, the back nine holes offer more of a challenge without being overwhelming. 100 Erial Rd., Sicklerville, NJ

According to DCNR, Tyler State Park Disc Golf Course is considered one of the best courses in the country – and at 36 holes it is absolutely huge. Divided into east and west sections with 18 holes each, this course is a particularly well-kept course with lots of wide areas to let off steam, a few water holes and lots of wooded areas to test your skills. 📍 101 Swamp Road, Newtown

This 18-hole Downingtown course is a must-see thanks to its varied layout. It starts with a few holes in the open air, then moves through the woods for a challenge and then along and over the eastern branch of Brandywine Creek before ending with a few holes in a more open field. Oh, and did we mention it’s only about a mile from Victory Brewing? 126 Wallace Ave., Downingtown

Known as the “Sank” among disc golfers, this 18-hole course is located in a Christian camp and retreat – unfortunately, Memorial Day is closed until Labor Day (call camp or email before your visit outside of this period). But when you go, you play on a great, well-kept course with a lot of variety, which is one of the best ever. It costs $ 3 to play, which you can leave in the dropbox near the first tee. 📍 68 Bertolet School Rd., Spring City

Iron Hill is the premier disc golf course in Delaware and is often used for national PDGA tour events and tournaments – but that doesn’t mean it’s only for the pros. This 18-hole course in Iron Hill Park offers a natural, heavily forested game with lots of boulders and height differences that not only challenge your skills, but also your stamina. Multiple layouts for each hole offer games for all levels of players. Robert L. Melson Ln, Newark, DE

Touted as the first disc golf course in Schuylkill County, this is – as the name suggests – on the premises of a winery, but is free to play. At 4,500 feet and 18 holes, this course offers plenty of tight, wooded areas for precise throws, and in a unique twist, the first tee shot begins on the winery terrace. The signature, however, is hole 17, which shows a hanging basket in an old barn. 📍 84 Fork Mountain Road, Auburn