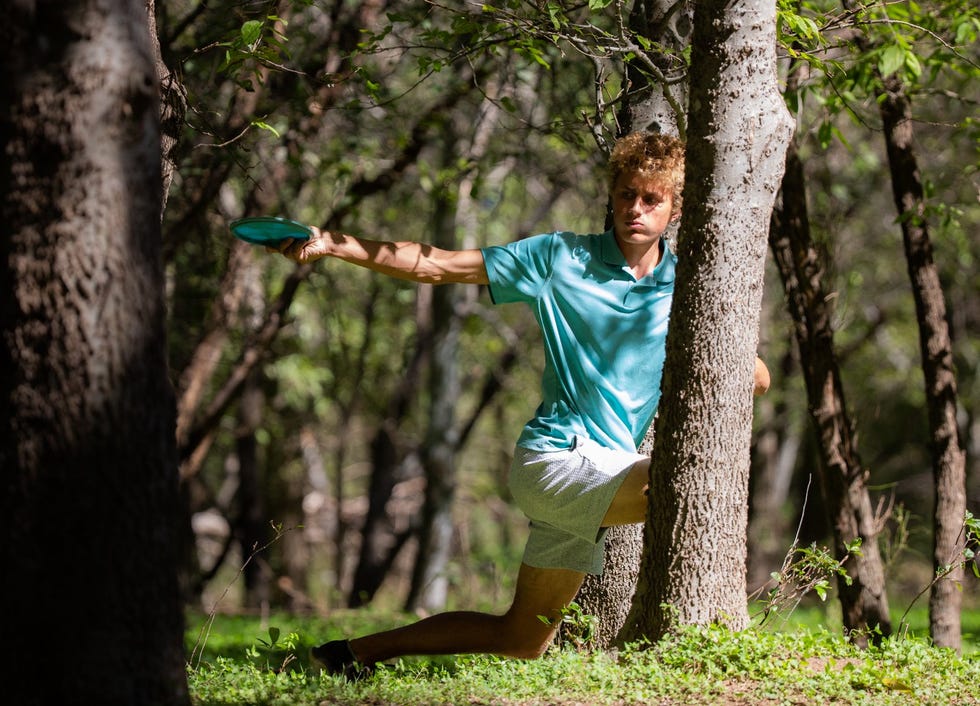 When Nic Maloukis took up disc golf 20 years ago, Mary Moore Searight Metropolitan Park, near his home in South Austin, was a natural destination.

The 18-hole course offers a nice mix of challenging strokes and short holes that will appeal to both seasoned players and the casual thrower, and the wooded and hilly course gave the Akins High School graduate a good reason to go outside.

“I grew up with Searight and still love playing there,” said Maloukis, who now lives with his family in San Antonio, where he works as superintendent at Government Canyon State Natural Area. “Whenever I visit Austin, I try to get there and do a lap or two.”

Maloukis will join hundreds of other elite amateur disc golfers as they compete in the National Amateur Disc Golf Tour National Championship on courses across the Austin area this weekend. Approximately 1,300 players will compete against each other, making it the largest amateur disc tournament ever held in the country.

These numbers come as no surprise to Maloukis, who has played golf courses in the San Antonio area and central Texas.

“The growth of the sport has been phenomenal,” he said. “You are going to Searight now, especially on the weekend, and you will wait for hours. It’s just amazing how the sport has developed, especially in Austin. “

That growth has helped make Austin one of the sport’s regional epicentres in Texas, and that’s one of the reasons NADGT Director David Feldberg selected the area for this season’s finale. After the qualifying rounds are completed on Saturday, the final round will be played on Sunday at the Met Center course in southeast Austin.

Feldberg, one of the most highly decorated players ever to take part in the Professional Disc Golf Association’s tour, is now running the NADGT with his wife Synthya. After the tour had to cancel last season’s planned event in Austin due to the pandemic, Feldberg said he wanted to make this year’s event historic. Austin’s ever-growing status as a destination city – as well as its penchant for disc golf – make it a natural host for such an event, Feldberg said.

“I was looking for a place that had a city with more than just disc golf,” he said. “And I wanted a place with good weather, centrally located and with courses. Everything agreed with Austin. “

The sport has outgrown the stereotypical “hippies and dogs and batik,” said Feldberg. The tournament drew almost all of the top amateurs from across the country, including Maloukis and a handful of local disc golfers who grew up throwing on Searight, Circle C Ranch, Guerrero Colorado River Park, Zilker Park, or Bartholomew Park – all five 18-hole courses administered by Austin’s Parks and Recreation Department.

There are also many sponsors at the amateur tournaments. Feldberg said payouts will hit $ 120,000 this weekend and the top finishers will likely have the opportunity to play on the more lucrative (and much more competitive) tour of the Professional Disc Golfers Association on Sunday. The finale on Sunday offers all the trappings of a big event with grandstands, food trucks and concessions. And it reflects the democratic roots of disc golf; the finale can be seen for free.

While the sport has grown steadily since the 1990s, participation has skyrocketed during the pandemic. Mike Olse, an Austin resident and former PDGA player who designs both public and private courses, said sales of discs and other sports-related equipment have grown exponentially over the past year.

“I mean why not?” said Olse. “It’s the perfect social distancing sport and a great way to get outside, distance yourself from people, and get exercise. The sport has just exploded since COVID. “

When Olse moved from Indiana to Austin two decades ago, he played his first round at Bartholomew, the oldest playable course in the state. At that time, said Olse, there were around 500 courses in the country. Now that number exceeds 8,000.

“I had never heard of it before (disc golf),” he said. “Now we are unable to keep up with demand; I mean we’ll never keep up with demand. We did a study at Searight a few years ago and there were about 700 rounds played on a given day over the weekend. “

Olse, who designed the Guerrero course as well as the Met Center course that will host the finals on Sunday, said growing the sport remains the biggest challenge in building a course. Austin’s beloved spot at Pease Park on Shoal Creek closed almost a decade ago due to excessive wear and tear, and Olse said the city might eventually charge a fee to pay for repairs and upkeep.

Olse says this is not exactly a popular opinion in the disc golf community, but it may need the sport to keep up with its growth rate.

“Some people say I’m the black cloud of Austin disc golf,” Olse said with a chuckle. “It’s so hard to alleviate foot traffic and pollution, but you have to find that balance because it’s a great way to get people outside and take advantage of the parks. Eventually, the majority of courses will be paid for. I think it’s inevitable. “

Aspiring players hope to outperform the event and gain recognition

But those concerns can wait for players like Dallas-based Gabe Hernandez, 24, who didn’t pick up a disc until just over a year ago. A devoted Ultimate Frisbee player during his college years at Stanford, he learned disc golf quickly enough to earn a coveted spot in the tournament that weekend.

“At first I struggled because it’s such a different frisbee,” said Hernandez, grabbing a compact 170-gram disc before an early round on Thursday’s Guerrero course. “But it’s a lot of the same mechanics and throwing shape; It’s just a matter of getting used to the various discs. “

Hernandez said playing on the grueling Texas courts prepared him to make a difference in the tournament this weekend, even though he may be less experienced than many of the players.

“If you play average in Texas, you’ll play really well in a lot of other states,” he said. “It’s big here; You have to come here and play and represent well. “

And how big is the tournament this weekend, especially for a talented newcomer like Hernandez who has professional ambitions?

“You get into the top 3 or top 5 here, that’s enormous,” he said. “I mean, 90% of the players here want to reach this level and a lot of big sponsorship companies will see who comes up. A lot of players are used to playing locally and playing amateurs and this is a chance to play a really big event and try to get recognition. “