Fancy a round? Disc golf arrives in Blenheim 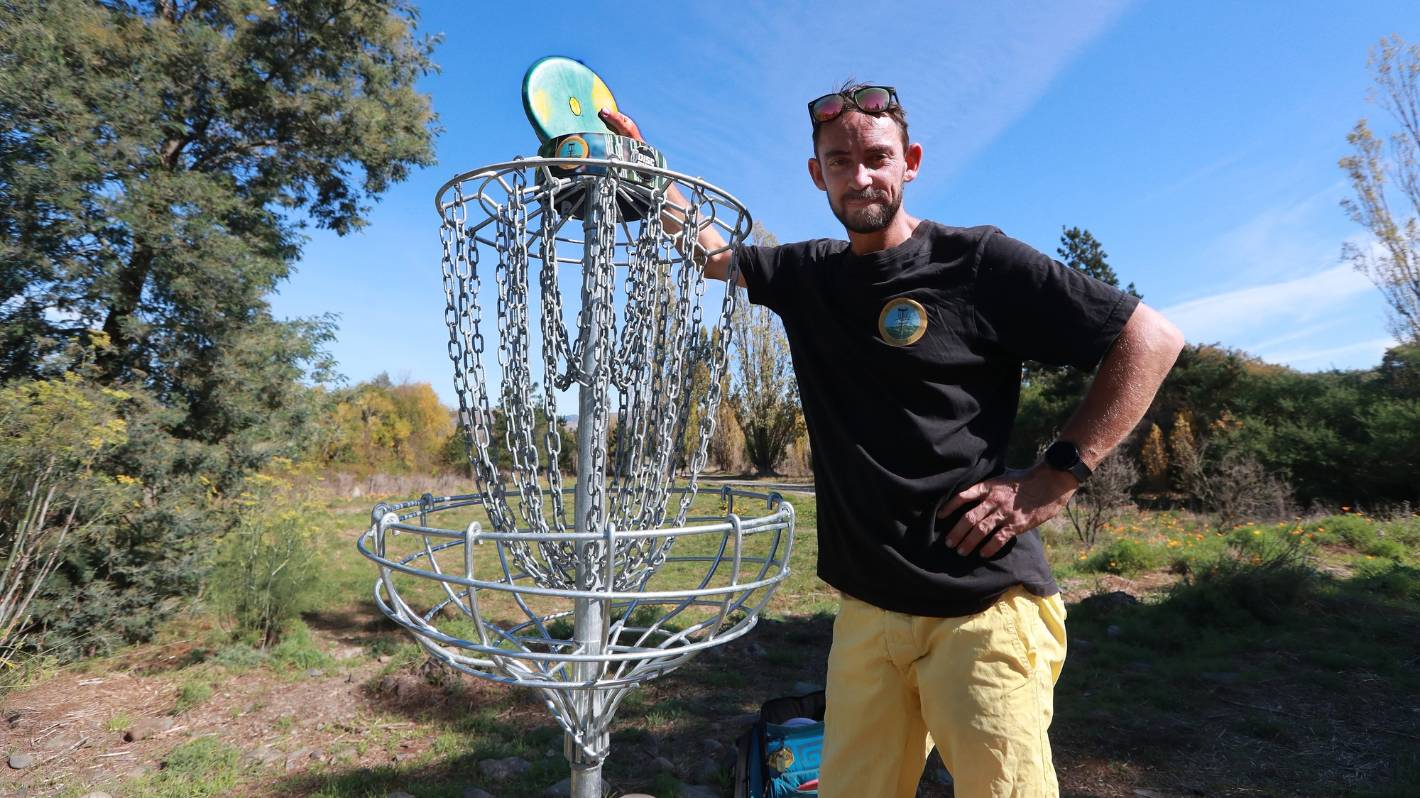 The finishing touches have only just been added to Blenheim’s first disc golf course, but it already has plenty of regulars going for round.

The nine “hole” course next to the Taylor River got off to a flyer towards the end of last year when the targets – which catch the discs – were laid out, but now the artificial turf “tees” have gone down to complete the 833-metre course.

Like golf, the disc version (because they’re discs, not frisbees) shares terms such as ‘birdie’ and ‘ace’, and every hole is assigned a ‘par’. All the holes at the Blenheim course are par 3, except the par-4 ninth.

The types of discs used in disc golf vary depending on what type of shot you’re taking, with some being slightly thicker and heavier than others. Corbyn gave me a ‘driver’, a ‘fairway driver’, a ‘mid-range’ and of course a ‘putter’ to use for the afternoon.

To get some initial distance from the tee, I selected my driver, which was the thinnest and lightest disc of the bunch.

My first ever disc golf throw went pretty much how you would expect it to; straight up in the air and way off to the side, but I still blamed the wind. I finished the first hole 5 over par.

The artificial turf ‘tees’ were finally completed at the end of March, though the specially designed targets which caught the discs were installed in November 2021.

Marlborough Disc Golf’s Chris Corbyn throws a shot from one of the newly finished “tees” at the Blenheim course.

This is the park’s shortest hole at 57m. It was probably too soon to call it a massive improvement, but I managed to only double the average score this time and finished 3 over par.

The third hole was indeed a gully, and required me to skilfully cascade my disc between two line of trees. Though I was up to the task, my weapon of choice had disagreed and decided to soar far to the left. I had to go around the trees rather than straight through, which cost my tally. Another 3 over par.

I got an ‘OB’ or ‘out of bounds’ as my disc veered on to the public walkway, but thankfully no joggers were around. This added an extra point to my score of 4 over par.

Corbyn said looking out for the public and making sure it was completely safe to throw was paramount within the sport as “the majority of courses around the country are located within multi-use parks”.

I needed to be careful not to overthrow on this hole, as just behind the target was a steep slope that led right down to the river bank. I was happy enough with 3 over par on this one.

The names of the holes sometimes give an idea of what to expect, like the third hole, ‘Gully of glory’.

Spoiler alert; I got my best score of the day on this hole, a 2 over par. I was still much, much worse than Corbyn though.

I quickly saw this hole got its name, as both me and Corbyn got our discs stuck in one of the hole’s infamous trees. His disc was easy to get, unlike mine.

Luckily, it turned out Corbyn was also a skilled rock thrower, which had obviously come with being experienced in a sport of throwing things.

My disc finally dropped from the tree after at least a dozen direct hits, and the game continued. Another 3 over par.

After being shown how to do a proper run up, I was much more confident in my disc throwing abilities.

Even though I needed slightly “more power” in my shot, Corbyn said my first throw on hole 8 was “good”, and I thought so too.

I felt cheated with a score of 3 over par for this one, but at least I was consistent.

Chris Corbyn with his bag full of discs, each one weighted and shaped for the type of shot needed.

Dun, dun, dun – this is the only par 4 on the course. I couldn’t even see the target from the tee, as it was a whopping 160m away.

But, after 3 throws, I was a lot closer than expected and Corbyn assured me I had improved “dramatically” over the past hour.

This feeling vanished as soon as I switched to my putter. After missing the basket 3 times at practically point-blank range, I was overcome with a feeling of frustration I’d only ever felt in mini-golf. I came away with a 4 over.

I finished the afternoon on 30 over. Corbyn said his best score at the Taylor River course was 6 under par.

“The learning curve is so shallow that you’re constantly feeling yourself improve every time you play,” he said.

People wanting to purchase discs in Blenheim can contact Corbyn through the DiscShop Blenheim Facebook page. Marlborough Disc Golf League days are on Sundays, and Corbyn sells discs there as well. Alternatively, there are several online retailers.