Stephenville recreation and wellness co-ordinator Marissa Simon, here with Benjamin Smith of the Maritime Disc Golf Association, hopes to organize disc golf nights for those interested in taking up the sport. (Troy Turner/CBC)

If golf is, as the old saying goes, a good walk spoiled, Benjamin Smith says disc golf is a great walk, enhanced.

The Pugwash, N.S., man is also convinced the sport is made for Atlantic Canadians. It’s social, thrives in areas with vast expanses of nature, and it brings little disruption to the environment.

“It’s not a thing [in Newfoundland and Labrador] per se but that’s only because it hasn’t had the opportunity to take root yet,” he said.

In disc golf, clubs and balls are replaced by flying discs, like Frisbees, and holes are replaced by baskets. Golf discs typically measure about a little more than 20 centimetres in diameter and weigh 130 to 180 grams, varying in shape and edge profiles, and are generally divided into drivers, putters and mid-range discs.

There are more than 275 disc golf courses in Canada, but Newfoundland and Labrador’s first one opened in Stephenville just this week. The Blanche Brook course, like most in the world, is free to play on.

Smith, a builder of the sport with the Maritime Disc Golf Association, designed the course and offered lessons to people in the Bay St. George area over the weekend.

“In the last 10 years, we’ve sprung from nothing to well over 2,000 players in the Atlantic region,” Smith said. “I have every reason to believe that this course will be the catapult for seeing disc golf thrive in Newfoundland.” 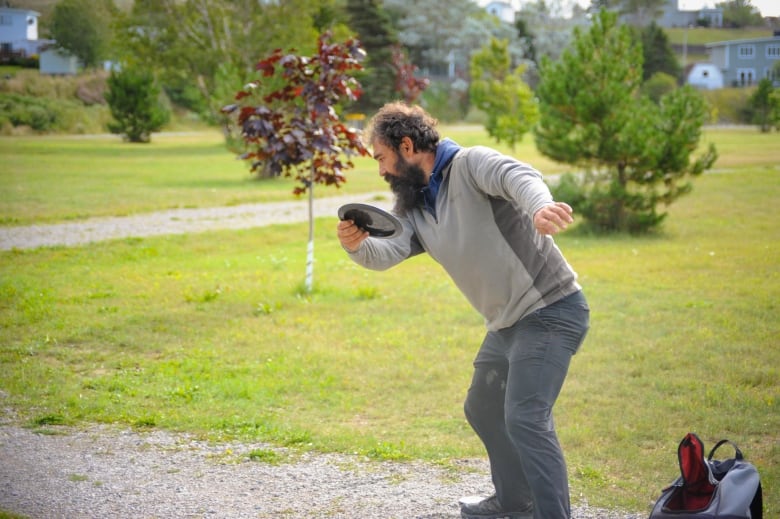 Smith says players can throw discs whichever way they choose, from the traditional backhand seen here, flicking it from the side or even rolling the discs. (Troy Turner/CBC)

This is the 25th course Smith has built since he moved back home to Nova Scotia following a stint in Colorado, where he was introduced to the sport. “I was literally playing disc golf every day (in Denver) and when I moved back there was none — there were zero courses in the Maritimes,” he said. “So I felt sorry for myself for a short period of time and decided, you know, it’s just money, why don’t I buy a few baskets on my own?”

He runs more than a dozen competitions a year and says he has taught more than 10,000 people to play. This is his first course in Newfoundland and Labrador.

The Blanche Brook course was designed with safety and fun in mind, said Smith. He studies how people walk through the park to avoid blind spots on his course, and also considers where people might want to take breaks or have picnics.

“I’m trying to blend, on a course like this, the flow of the walking path, the blind spots, avoiding the river as many times as I can,” he said. “I also have a soft spot for trees and there are a lot of very lovely trees in this park so I want to interact with those trees as much as I can.”

The town hopes people will now interact with the Blanche Brook areain new ways with this course. 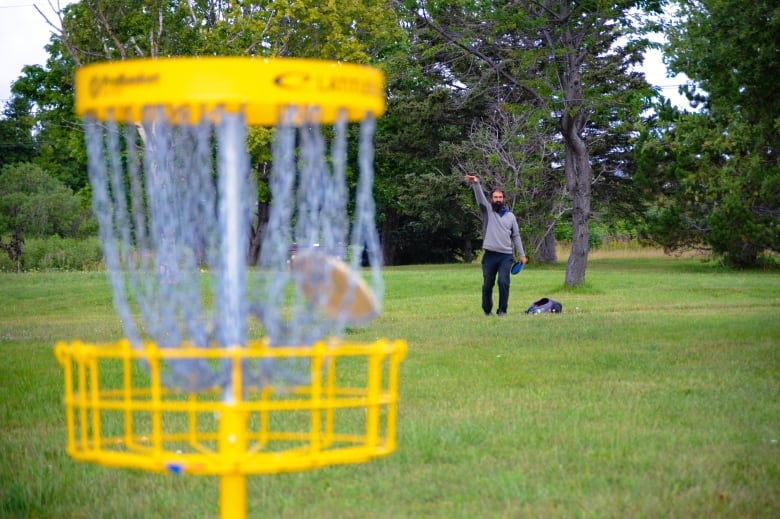 A successful shot sees the disc clang off the chains and stay within them or the basket. Smith says the baskets erected in Stephenville are rugged and made for northern climates. (Troy Turner/CBC)

Marissa Simon, Stephenville’s recreation and wellness co-ordinator,  said the idea for a disc golf course came from a conversation she had with her mother, who lives in Flin Flon, Man. Simon had called to talk sport and recreation with her father, a physical education teacher, when her mom began to tell her about a new disc golf course that had opened in Flin Flon. From there, she was eventually put in touch with Smith, and the idea started to come to fruition.

“I was looking for something in the midst of this pandemic that the community could do, that was safe, outside, promote physical activity and I really didn’t know where to go,” she said. “I think this is something that would be available across a lifespan, from toddlers to seniors, that is free and accessible in the park and doesn’t require a lot of physical exertion — just a nice walk and a place to play.”

Future plans include disc golf nights and a tournament next summer. Simon says the town hopes to have discs on hand and is working with a local retailer to carry them.

“The great thing about this course is that it’s open and available to all so anyone who likes disc golf can come to Stephenville and play,” she said. “They don’t even have to let anyone know, technically. They can just come and play.”

Smith is also working on bringing disc golf to St. John’s, and is planning an event next year to help build interest.

“I often joke that disc golf is everything that Atlantic Canadians want — they just don’t know it yet.” 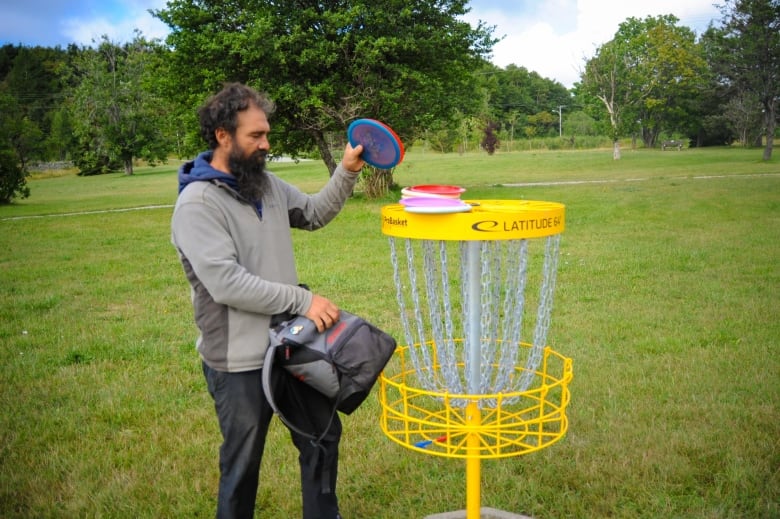 Golf discs typically measure about a little more than 20 centimetres in diameter and weigh 130 to 180 grams. They vary in shape and edge profiles, and are generally divided into drivers, putters and mid-range discs. (Troy Turner/CBC)

← Blend360 Announces LPGA Partnership, Sponsoring Ana Belac Tiger Woods on Phil Mickelson: 'I have not reached out to him' →