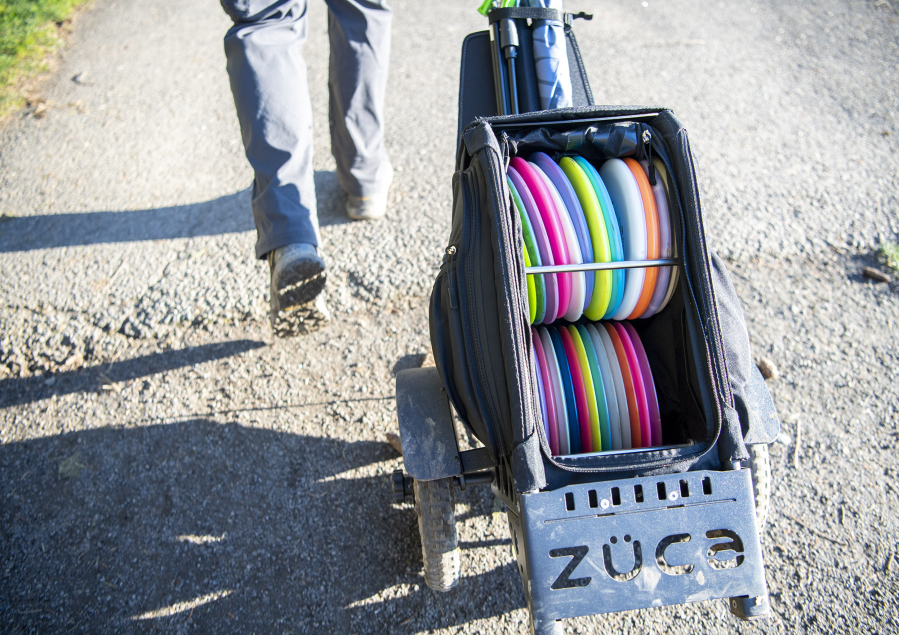 HOCKINSON — After years in the works, Hockinson Meadows Community Park is finally getting an 18-hole disc golf course.

“It’s been a painfully long time,” Josh Dearing of Vancouver said. “I’m an eternal optimist, but I’m also a realist in the sense there’s always someone that might not want something in their backyard. I really hope the community will back it.”

Romaine Rotschy, senior lead estimator for Tapani Inc., which was awarded the contract to build the course, said construction will begin in late April or early May and will finish up by the end of summer. Clark County Public Works’ records estimate the cost for the entire project at $455,169.

Public Works will host a virtual open house at 5 p.m. Wednesday where area residents and disc golf enthusiast can learn more about what is being planned for the popular north county park, ask questions and provide feedback.

The Clark County Council initially approved construction in 2016 with an estimated opening in 2018. It would have been the first 18-hole disc golf course in the county. But there were delays in finding the right property and raising the money needed to build the course. In April 2021, an 18-hole course opened at Washougal’s Hartwood Park.

Dearing, the former treasurer of Stumptown Disc Golf said he and Steve Carson of Vancouver/Clark Disc Golf have been working for several years to make Hockinson course a reality. As avid players, the pair also worked to create a new course at Leverich Community Park in Vancouver

Dearing said disc golfing often leads to parks being safer and cleaner. He said that happened at the Leverich park, but that changed after some of the course was removed and the park was no longer used.

Dearing said the Hockinson park will also take some of the pressure off other disc golf courses, which are in high demand. There are courses at Glenwood Community Church in the Glenwood area of unincorporated Clark County, Abrams Park and Pekin Ferry RV Park in Ridgefield, Paradise Point State Park in La Center, and Yacolt Recreational Park in Yacolt, which feature 9- to 12-hole courses.

The new course is being built on a 40-acre parcel of parkland separate from the existing developed park areas. According to the county, the course was designed to meet Professional Disc Golf Association standards and each hole will include a tee pad, hole marker, basket, and a bench.

The project also includes installation of a new 225-square-foot covered play structure — similar to structures already in the park — with picnic tables. Just over one mile of trails will be added when construction is complete.

To create the disc golf course, Rotschy said eco-blocks will be used at each of the 18 holes, noting the county is trying to minimize the amount of concrete brought into the park to avoid compacting the soil.

“I think adding more services to the park is great for the community. Having more outdoor activities is great,” said Cat Montgomery of the Greater Brush Prairie Neighborhood Association. “There have been concerns over park safety, the stresses put on the sheriff’s department due to COVID. We had been under the impression that the project had been shelved so we were happy to see that fundraising is there.”

Montgomery said the neighborhood association fully supports “anything that brings the community out together and enhances what people moved to the Pacific Northwest for, which is outside activities.”

Montgomery said disc golf has a widespread following and is something people of all ages and skills can play. A recently released report from UDisc (the official app of the Professional Disc Golf Association that tracks golf rounds, leagues and courses) showed the number of rounds scored on the app in 2021 increased nearly 50 percent from 2020. The report also showed the number of courses worldwide increased 15 percent from 2020, with around 71 percent being free to play.

“The more you take your kids there, and your family there then the more pride there will be in the park,” Montgomery added.

Those wanting to ask questions or offer public comment at the open house will need to register in advance at clark.wa.gov/public-works/hockinson-meadows-community-park. Registrants will receive a confirmation email with a link to join the meeting. Those who do not register can still listen in by calling 1-408-418-9388. The meeting number is 2484 249 9390 and the password is Park.