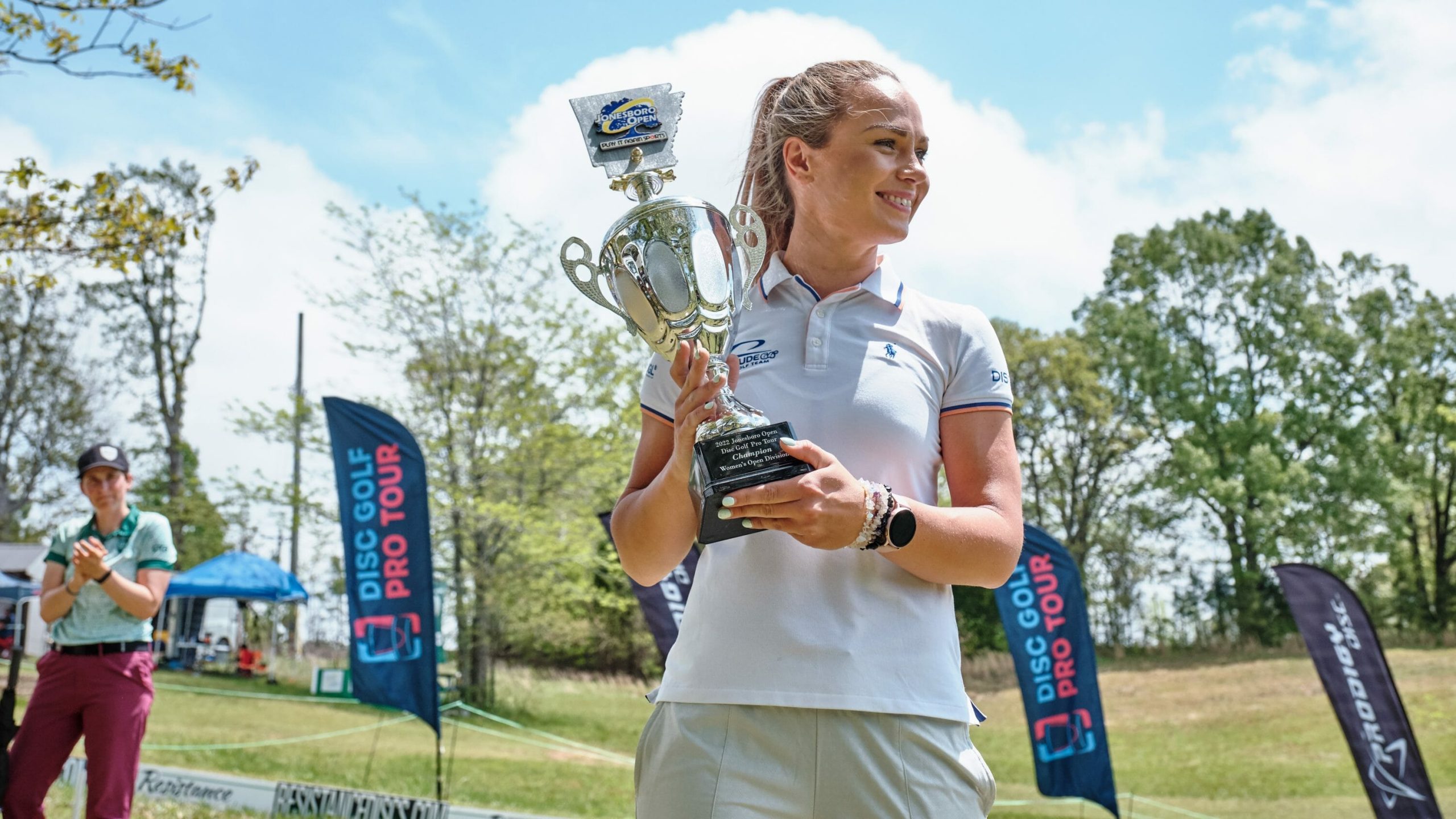 It was Tattar’s best-ever tournament performance.

April 25, 2022 by Charlie Eisenhood in News with comments

Contents show
1 April 25, 2022 by Charlie Eisenhood in News with comments
2 Mertsch, Hansen Stand on the Podium

JONESBORO, Ark. — One week ago, Kristin Tattar stood on the 18th green of WR Jackson in stunned silence. After leading for much of the Champions Cup, she had just missed an opportunity to close out Paige Pierce with a birdie putt and instead four putted, letting the tournament slip through her fingers.

It was a sign of her resilience and overwhelming talent that she stepped onto the course at the Jonesboro Open this weekend and crushed the competition for her first Disc Golf Pro Tour win of 2022.

“I think I have a short memory,” said Tattar. “It happened — there was nothing I could do about it. It was sad for a moment. I cried for a little bit, then I forgot about it.”

Tattar defeated second place finisher Missy Gannon by 10 strokes, shooting three straight hot rounds to close out the tournament at 24-under par despite difficult windy conditions. She left no doubt about who the best player was on the weekend.

“I was driving very well,” she said. “I think first round, I was inside Circle 2 on every hole. So I gave myself a lot of opportunities and I was feeling well.”

Indeed, she had a birdie look on every single hole in round 1 and followed it up by getting to the green in regulation on 17/18 holes in each of the next two rounds. Her 96% Circle 2 in regulation mark is easily the highest of the season as she delivered 2022’s biggest margin of victory.

It was a record setting performance. After shooting her highest rated round ever in the first round (1022), she followed it up with another 1000+ rated round and averaged 1008 golf on the weekend, a career high. She continued her streak of making the podium at every DGPT Elite Series and National Tour event that she’s played.

Tattar had a three-shot lead after the first round, extended it to seven shots after round two, and ultimately finished with a double digit win, even as Missy Gannon shot a 982 average, 22 points above her rating, in second place. She was the only player in the field never to throw out-of-bounds.

With the win, Tattar moves to the top of the DGPT standings ahead of Pierce and Catrina Allen.

Mertsch, Hansen Stand on the Podium

Kat Mertsch continued her excellent 2022 season by finishing tied for third place at Jonesboro. It is her first career top three finish at an Elite Series or Major tournament.

Tied with Mertsch was Ella Hansen, who landed on the podium for the third time in her career, after taking third place at the 2021 US Women’s Disc Golf Championships and 2021 Portland Open.

Both of the new-to-touring pros are inside the top 10 in the DGPT standings, with Mertsch in 6th and Hansen in 10th. After Tattar, they were statistically the two best players off the tee at Jonesboro, and Hansen impressed from Circle 2, hitting 38% of her putts from distance.

← Casey Martin lost a leg, but he hasn't lost hope | Golf News and Tour Information From their tees: Millington female had to play with the boys, now off to Alma College golf →