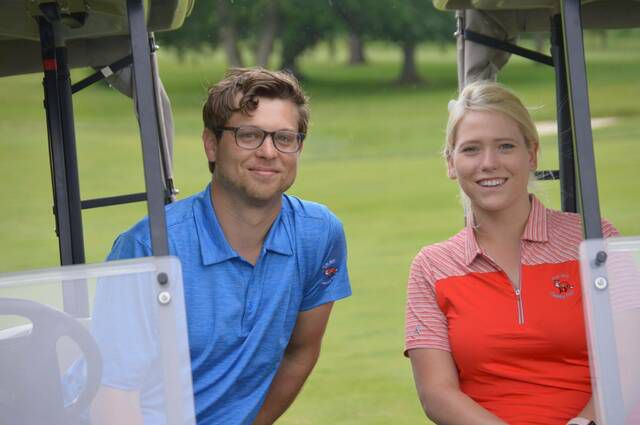 Mother Nature chased Ross Brown from Florida and back to his home in northeast Pennsylvania.

Brown ended up at Fox Hill Country Club for a temporary fix.

Four years later, Brown is the new head golfer at Fox Hill and takes over on November 1 with the resignation of Francis Hayes.

Brown is only the ninth Head Golf Pro in the club’s 101-year history.

A native of Kingston, 2005 graduate of Wyoming Seminary and current Scranton resident, he spent four years golfing with Franklin & Marshall. After college, Brown became a professional both playing and teaching.

Brown spent four years on the minor league golf tour in Florida and won one there. He has also qualified for two Pennsylvania Open and one Florida Open. His golf career now focuses on the aspects of club management as a club professional.

“The most important things I will take care of are implementing new player development programs and junior camps and running the filled 2022 tournament schedule that we have,” said Brown.

Victoria Petrosky, who becomes the first assistant and tutor, will assist Brown with the various programs.

Assistant Pro is a role Brown spent four years in Florida in the West Palm Beach and Fort Lauderdale areas, working on a private club and three semi-private / resort courses.

“This is where I gathered all of my skills that I have today,” said Brown. “The great thing was that I saw all the different programs between semi-private, private and resort.

“I’ve taken the best of what I’ve seen and I’m really looking forward to doing it next year.”

Brown returned to Pennsylvania when the destruction from Hurricane Irma shut down golf at the Diplomat Golf & Tennis Club between Miami and Fort Lauderdale.

“I had nowhere to work or really live at the time,” Brown said, “so I returned home. It was around that time of year, November, and I wanted to stay home for the holidays. “

Brown needed work, and Hayes was an assistant at Fox Hill.

“I knew Fox Hill and I loved it and I was happy to help Francis, but I just thought it was going to be a year-long thing by the time I moved back to Florida,” Brown said. “What stood out to me the most is how real and great the membership is and what a great golf club it is.

“I liked it so much that I wanted to stay as long as possible.”

When Hayes retired, Brown moved up and said he was “honored” to take the position.

Brown has set priorities in his upcoming first season to continue growing in the game.

Brown stresses that the club will always follow local health protocols, but expects the club to return to full capacity in connection with its dining and banqueting events.

This gives the club the opportunity to present the recently completed outdoor terrace. The terrace can seat up to 60 people for al fresco dining overlooking the 18th green.

Brown said he was excited about using the golf simulator the club installed in early 2021.

“We’re starting a winter golf league, the first time Fox Hill has ever done this,” said Brown. “That will help keep people’s games sharp, especially when it’s too cold to be outside.”

The eight-week league starts in December and continues in mid-January and February.

Brown said the simulator also provides detailed information about the golf swing that can be helpful when teaching.

The club has also expanded its putting and chipping greens.

“There is a whole additional section in our short play area that we have improved,” said Brown, who also pointed to “big improvements” to an extended driving range between the 1st and 18th fairways.

An outside pavilion and grill at the turn between the 9th green and the 10th tee was another addition last year.