How Blindgolf rescued Doc NeSmith from a “permanent state of loss” 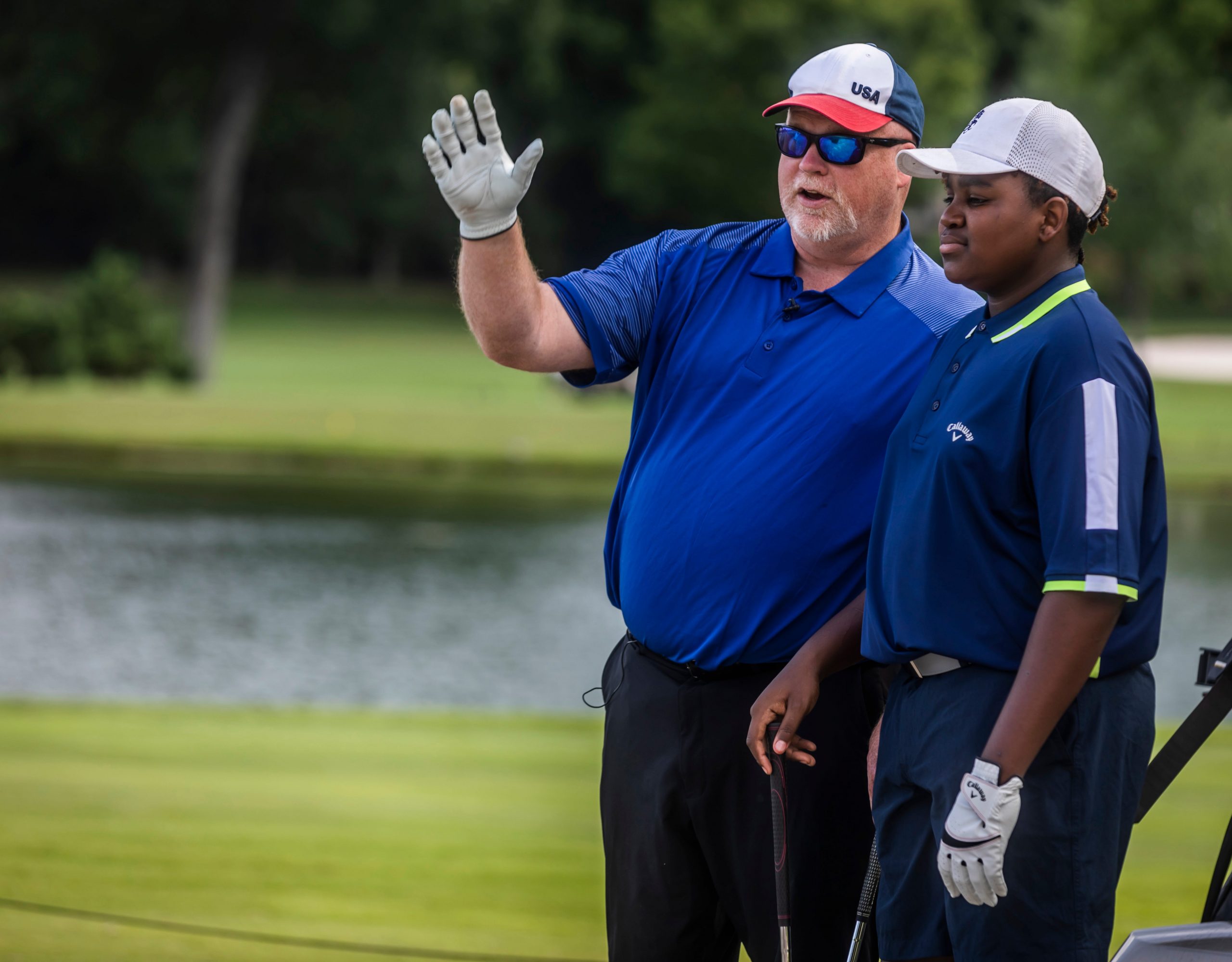 Chad NeSmith and Malachi Johnson are intrigued by the same game.

Although neither of them could see the patch of grass flying in the air after it was hit by Johnson’s iron blade at Brentwood Country Club, they could hear it.

“What do you think you did wrong?” asks NeSmith.

“Lost my balance?” an uncertain Johnson asks back.

“You lost your balance,” says NeSmith.

NeSmith, known to most as “Doc”, stands with folded arms, blue chrome glasses fixed on his student and waits for another swing.

This time he hears something different. The sound is compact. It’s harmonious. That’s right.

“There it is! Outstanding Malachi! Straight ahead,” says NeSmith with a big smile. “Once you find out, ‘I will swing and never miss’, with so much confidence you will start swinging.”

Golf has become a source of freedom for NeSmith that he could never have imagined when he lost his sight as a teenager. His path led him from an adolescent boy who is not sure of his future to a 51-year-old man who is sure of his destiny: to look after young people with disabilities like his.

Johnson, 13, is his youngest student to join him after losing almost all of his eyesight in 2020. He was still playing basketball in December. He is now taking lessons from NeSmith – a blind national golf champion – although he has never played the sport in his life before he became visually impaired.

“When I play the golf course,” NeSmith said, “I actually forget that I’m blind.”

How NeSmith lost his sight

Contents show
1 How NeSmith lost his sight
2 How does blind golf work?
3 “Doc was an answer to a prayer”
4 More than just a golf coach

NeSmith was meant to be an athlete. Growing up in Cullman, Alabama, a staunch Crimson Tide fan, he thought about his life.

He’d become high school quarterback, played college football in Division I, and was drafted into the NFL. If the last part of that plan didn’t work out, he’d just become a coach.

“Since I was 5 years old, I haven’t had anything else on my mind,” he said.

NeSmith began to notice that his eyesight deteriorated when in practice he could not see hits on the blind side. He knew something was seriously wrong when he slammed into trees while playing with friends at dusk.

A visit to the doctor resulted in a diagnosis of retinitis pigmentosa, a genetic disorder that gradually leads to loss of vision. NeSmith was 12 years old and there was no cure.

“Being blind is a permanent state of loss,” NeSmith said. “Just socially for me it was a miserable time until, you know, 23, 24.”

NeSmith’s dreams of becoming a soccer star are gone.

With the help and support of friends and family, he eventually learned to move on and attended the University of Alabama at Tuscaloosa.

There he met his wife Patricia and received his doctorate in counseling training, which enabled him to open and own a private clinic for 13 years, where he advised families and children with learning difficulties.

With his front line work, NeSmith’s athletic ambitions were all but forgotten until 26 years after his diagnosis. Patricia then recommended playing golf.

NeSmith had never played before, but he had occasionally watched the Masters on TV.

NeSmith, a left-handed man, fought first. But his competitiveness unlocked something in him that he hadn’t felt in decades.

“I want to feel that inner harmony that comes when you hit the perfect golf swing,” said NeSmith. “It’s a wonderful feeling of accomplishment because you know … you made it without being able to see the ground.”

How does blind golf work?

Imagine standing up to hit a 20-foot putt. Or, try reading the slope of a green as you determine how hard it is to hit.

Now imagine doing it with your eyes closed.

NeSmith does this every time he plays.

“Blind golf is an absolute sanctuary,” he said. “Because when you play golf, whether you see or not, it’s about you and the golf ball.”

Blind golfers play a course like any other with the help of a guide or trainer, with one exception: Blind golfers can ground their clubs in a bunker so that the club rests on the sand and ball while preparing to swing.

The guide will help paint a picture of how each hole can be visualized. The guide also helps the player adjust his stance and position the club face for a perfect shot.

“It’s a team sport, it needs a good coach,” said Patricia. “There has to be a relationship between them and the coach has to learn to protect him.”

NeSmith, whose top grade is 79, has spent countless hours perfecting his swing. His breakthrough came in 2016 when he won the US Blind Golf National Championship in Sarasota, Florida, at his first tournament.

NeSmith felt a childlike “happiness for months,” he said.

The next year he repeated himself as a champion, but the rush of joy did not last. He leaned on Patricia for help.

“I asked my wife and said, ‘You know, I just won the second time, but it’s already gone. Do you know what’s going on?'” He said. “She said, ‘You do it for yourself. You don’t do it to improve others.'”

NeSmith had an epiphany.

He remembered the social and mental challenges he faced as a boy raised blind. And he wondered how different his life would have been if someone had given him a golf club as a young teenager in Alabama.

The solution was to found a non-profit organization: A Vision in Darkness, which aims to help blind or visually impaired children by introducing them to golf.

“I wish someone had given me a club when I was 13 and said, ‘Hey, I think you can play golf,'” NeSmith said. “Because who knows, I mean it could have been a game changer for me emotionally.

“That’s what we’re trying to do now. … I want to keep getting the message across to people that blind golf is something that can save your life. “

“Doc was an answer to a prayer”

Candice Green Clopton, who calls herself Joy, discovered blind golf from a friend. She called NeSmith in May after Malachi Johnson – her son – lost almost all of his eyesight to a genetic condition called liver hereditary optic neuropathy.

Through his nonprofit, NeSmith invited Johnson to a class at the Brentwood Country Club. Johnson came back for another lesson, then another week later.

They began dating every week over the summer, with Johnson getting better every week and his mother serving as his guide.

“(Doc’s) helped Malachi open his eyes and see, just because you’ve lost your eyesight doesn’t mean anything,” said Clopton. “‘It just gives him his own hope and someone to identify with, to look up to, to inspire.”

“I feel like (Doc) was an answer to a prayer,” added Pearlette Kinnard Green, Johnson’s grandmother.

Because of his commitment, NeSmith awarded Johnson his first set of clubs. Johnson hopes he can play at NeSmith level in time.

“Just to win a couple of tournaments,” said Johnson with a smile. “Probably more than him.”

More than just a golf coach

The NeSmith and Johnson relationship is more than just a golf coach and student. It is also a life coach and friend.

Johnson confides in NeSmith and asks questions like, “How do I use my stick?” And “How was school for you?” And “Will I be able to go to college?”

NeSmith laughs at the last question.

NeSmith assures Johnson that his time in college will be a breeze compared to his “old” way of having tutors read him his textbooks.

“You can do that, no problem,” says NeSmith.

After the exchange, NeSmith and Johnson get up shortly before closing and head to the Brentwood Country Club driving range.