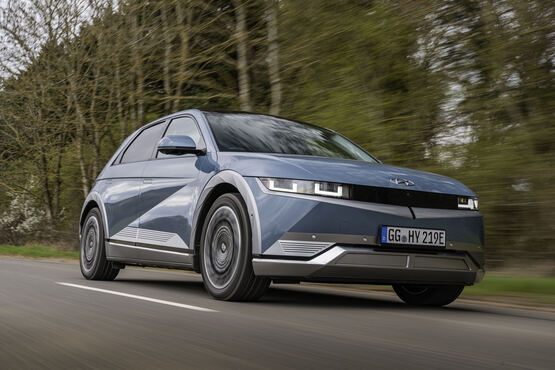 After Hyundai successfully made the transition from a budget-friendly brand to a mainstream brand, Hyundai is now looking for a part of the premium market.

It introduces a new sub-brand called Ioniq, which is only offered with electric drive alongside the existing Hyundai model range.

The Ioniq 5 will lead this new range of products, using an entirely new platform, powertrain, and design language.

After its unveiling in March, Hyundai received 236,000 expressions of interest from European customers, while the limited edition Project 45 was oversubscribed nearly three times in 24 hours.

The car’s hatchback silhouette might lead you to believe it is a Volkswagen Golf rival, but it’s only when you see the Ioniq 5 in the metal that you realize its footprint is larger than that of a Tucson SUV and thanks this EV-specific chassis, interior is on par with a luxury sedan.

The concept car look, with its balance of retro and modern stylistic elements, should be enough to attract electric skeptics, and if you dig deeper, it becomes clear that the Ioniq 5 is an utterly practical car.

Fortunately, Hyundai decided to keep the controls for key elements rather than bundling everything into one touchscreen.

There is a volume control for the radio and a touch-sensitive control panel for controlling the air conditioning.

Prices start at £ 36,940 and there are three drive options to choose from, starting with the 58 kWh rear-wheel drive model. You can increase the range with the 73 kWh variant, which costs from £ 41,890.

There is also a two-engine all-wheel drive model available for £ 45,090. The entry-level car offers a range of up to 240 miles, while the larger battery offers 300.

So far we’ve only tried the twin engine; which promises 287 miles, officially. In our experience, it will be difficult to go beyond 250 miles.

Our test model showed a consumption of 3.3mi / kWh, which is much less than we achieved with a Kona EV.

We look forward to testing each engine variant to see if it is more efficient.

As a premium-oriented model, the Ioniq 5 is of course much heavier than a Kona. It weighs almost two tons (depending on the equipment).

The result is a much smoother and more refined experience than you get from its siblings.

The Ioniq 5 feels like an executive sedan. Riding the 20-inch wheels on our test model was a bit tough, though the super-soft seats help isolate passengers a bit from it.

Dynamically, the Ioniq 5 isn’t quite as responsive as its hot-hatch design suggests, but that doesn’t mean it’s not well calibrated. 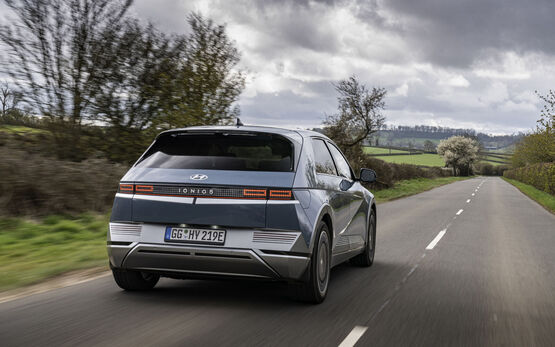 The body tilt is minimal and the weight is largely confined to the chassis, which means that the center of gravity is low.

With 305PS, the twin-engine version feels sufficiently potent. It manages the benchmark of 0-100 km / h in 5.2 seconds and delivers a healthy acceleration boost if necessary.

A three-stage regeneration system can be controlled via steering wheel-mounted paddles and the driver can switch between the driving modes Eco, Comfort and Sport – there is also a one-pedal driving function called i-Pedal. When it comes time to charge, the Ioniq 5 has an edge over its mainstream competitors.

It’s equipped with an 800 V architecture – that’s what you get with a Porsche Taycan – and that means the car can use 350 kW ultra-fast chargers. When you find one, you can charge 80% of the charge in just 18 minutes.

The comfort in everyday life is further increased by a large trunk, wide-opening rear doors and a practical blind-spot camera system that, if desired, shows a live video image from the rear of the vehicle in the instrument cluster.

There is a big gap between budget-friendly and luxury electric vehicles, leaving buyers and company car drivers looking for an electric alternative to the ubiquitous German sedans little choice.

While its range may be a little less than we had hoped, the ability to charge so quickly, coupled with the desirable looks, good performance, and comfortable handling of the Ioniq 5 make it an ideal competitor in the premium market.