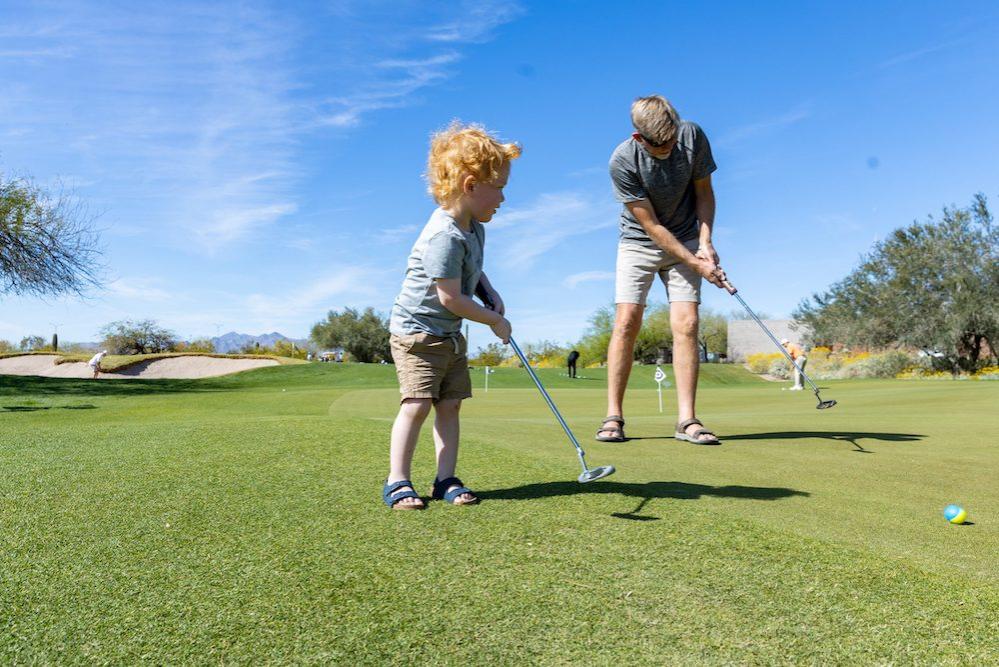 After a boom in golf’s popularity that followed the emergence of
Tiger Woods as a sports superstar, the game slipped into a post-Tiger
effect downtrend. Over a 15-year period from 2003 to 2018, the number of
golfers declined in the United States by 6.8 million.

More than 1,200 courses closed across the country over that same
span, golf manufacturers saw sales sink and considerable hand-wringing
followed over what could be done to bring golfers back and also attract a
new generation to the game.

Former golf great and course designer Jack Nicklaus even suggested,
among other things, enlarging the hole to speed up play or dividing
18-hole courses into three six-hole courses instead of two nine-hole
ones to allow players to play 12 holes, thus spending less time at the
club.

Then along came a global pandemic.

At first, people were confined to the indoors when COVID-19 struck.
Eventually, social distancing and small gatherings were encouraged.
Outdoor activities were deemed more safe, which aligned perfectly with
golf.

In 2020, especially over the second half of the year, numbers for golf suddenly improved. And they’ve continued to skyrocket.

A pandemic and the sport’s commitment to modernization have lured many back to the fairways.

“The golf course was considered a place for people to escape the
pandemic,” Longbow Golf Club general manager Bob McNichols said. “You
don’t play golf indoors where you’re restricted in the air you breathe
and the access you have to the environment. So, golf became a popular
activity for people who were no longer doing things the same way they
always did and looking for not only activities, but a way to get better
at the game.”

“We got to the point now where we don’t really have enough tee
times,” said Andrew Frazier, vice president of Paradigm Golf Group and
director of sales and services at Dobson Ranch Golf Course, a municipal
18-hole course in Mesa. “There’s only so much sunlight.”

Golf courses aren’t the only aspect of golf with increasing business.
PGA Tour Superstore saw a 70 percent increase in business during 2020
and 2021, according to the National Golf Federation.

At the beginning of the pandemic, golf seemed to be still on a
downward spiral. In April 2020, 42.2 percent less rounds were played
compared to April 2019. However, by November 2020, golf was well on its
way, with a 56.5 percent increase in rounds played compared to November
2019.

In recent years, it’s apparent that more people are going out to the
course and buying gear. While the COVID-19 pandemic is a big factor in
the sport’s growth, golf courses and other sports entertainment
companies are taking a more modern approach to their facilities and
brands.

“Golf has been around for a really long time,” Frazier said. “It’s a
sport of tradition and everything like that. We don’t think golf is the
most forward thinking sport.”

Golf courses such as Dobson Ranch bump music throughout their course, on the driving range and even on golf carts.

“We’ve had the speakers for two, almost three full years now on the
carts,” Frazier said. “The music around the properties is another thing
we do at all of our properties. Again, just to kind of keep the energy
up and keep things more of a fun and kind of friendly environment.”

The atmosphere at Dobson Ranch Golf Course is modern and represents
the changing culture of the sport. Cheyanne Stewart, the lead junior
instructor at Dobson Ranch, said golf is adjusting to make everybody
feel welcome and comfortable.

“This golf course is really inclusive,” Stewart said. “It really
adopted the trends that the community, even the world, has loved:
wearing the hats, not having to wear your shirts tucked-in all the time.
You don’t have to wear the golf shoes, and all that stuff. It doesn’t
matter what you look like or what you wear. We’re just happy that you’re
here.”

Stewart, 23, has witnessed a shift in the clientele toward a younger crowd.

“When I started playing, it was the 50-plus (age) and older always here every day of the week,” Stewart said.

Now, Stewart said, senior citizens are far from the only age group
present at the course. College students play. Working middle-aged moms
and dads come out to the fairways. So do families.

Golf’s appeal appears to be changing, but one may think courses are
now faced with an identity crisis. The old-timers of the game want to
play a full 18 in collared shirts and slacks, while the next generation
of golfers prefer to wear shorts, compete to see who can hit the ball
the farthest and play a quick nine instead of 18.

Still, the fusion between traditionalists and the modern, younger generation has gone smoothly.

Frazier said that, less than seeing golf get younger, he just senses an air of enjoyment from all ages around the facility.

Frazier implemented the same changes at a course in South Florida
amid a retirement community. The participants enjoyed the change of
environment, he said.

“It’s almost like a fountain of youth,” Frazier said. “You put on the
music, you start doing games, you do contests. I mean, we’ve got
cornhole out here. It’s just kind of bringing a breath of fresh air to
(the older participants).

“The coolest thing to see is everybody went from being kind of somber
and focused to now exciting, having fun, meeting each other. It’s
really gotten a sense of a community started.”

At all ages, golf is now more associated with fun. While the
buttoned-down, traditional approach still remains for some, the sport
can take on other forms.

The competition in golf revolves around shooting the lowest score
over 18 holes. Taking the least amount of strokes per hole will earn you
first place, and that is how the sport determines the winner of the
tournament at the high school, college and professional level.

However, a round of golf can take more than four hours to play, and
tournament golf often takes even longer to determine a winner.

Today’s golfers, many of them of a younger generation, crave shorter,
more frequent competition. Today, golf courses are finding ways to
appeal to them. That’s where businesses like Topgolf, which “gamify”
golf, have flourished.

A 2018 survey
conducted by the National Golf Foundation revealed that 53% of Topgolf
guests who identified as non-golfers said, “that playing Topgolf has
positively influenced their interest in playing traditional golf.’”

“I think it all goes back to that you have a younger crowd that is
super into games and competitions,” Frazier said. “Finding ways to
gamify golf for the traditional driving range experience is one thing.”

Further pushing the younger appeal to the sport is the celebrity
connection. Professional athletes from other sports pick up the clubs
and draw increased attention to the sport. Musical artists, actors and
other celebrities do the same.

In ESPN’s “The Last Dance” documentary about the Chicago Bulls,
Michael Jordan is constantly seen golfing during his free time. Former
Cardinals receiver Larry Fitzgerald, country musician Dierks Bentley,
Green Bay Packers quarterback Aaron Rodgers, comedian Bill Murray and
Olympic swimmer Michael Phelps are among the celebrities who have played
in what is now called the Annexus Pro-Am during the WM Phoenix Open at
TPC Scottsdale through the years.

“Now, you can see Steph Curry, Larry Fitzgerald, all sorts of
well-known names that you would never have imagined seeing on a golf
course,” Frazier said. “Turns out they’re avid golfers, right?”

Despite the recent uptick in popularity, those in the golf industry
are still looking for innovative ways to draw newcomers to the sport or
make it more enjoyable for those who already play.

At Longbow Golf Club in Mesa, golfers can use GolfBoards to move
between shots instead of two-person carts. The single-rider electric
boards are reminiscent of electric scooters and are being used at more
than 300 courses across the country, according to the company’s website.

“There’s no wasting time driving two people in a car, going over
here, and going over there,” said Kristin Heffern, a golfer who used the
GolfBoard at Longbow. “They’re fast. They’re exciting. They keep you
focused on the game. It’s a bit of an adrenaline rush.”

Both Dobson Ranch and Longbow also utilize Toptracer technology on
their driving ranges, giving golfers the kind of feedback on their
swings that pros get, while also adding some fun to the experience.

“I guess the best way to explain it is that we have outfitted our
range with Toptracer technology, which is a system of cameras and
monitors that track your shots and allow patrons to practice with
detailed information as well as play games like virtual golf, long
drive, and accuracy contests on the monitors as opposed to just hitting
range balls out at stationary targets,” Frazier said in an email.

More versions of the sport are popping up, but this isn’t the first
time golf has taken other forms. Miniature golf has been around for more
than 100 years. There also are alternative sports that are modeled
after golf, such as footgolf and disc golf.

“There’s a variety of ways to be introduced or enjoy the game,” said
Hugh Smith, director of regional affairs at Youth on Course. “I think
(the variety of ways) are all a plus.”

The sudden spike in golf’s popularity isn’t just showing up on golf
courses, driving ranges and game centers. It also is reflected in
television ratings.

According to golfweek.usatoday.com,
the last round of the 2022 Masters attracted more viewers than any
other golf telecast on any other network since the fourth round of the
2019 Masters, a tournament in which Tiger Woods emerged as the champion
after a long hiatus from winning a major.

Woods again factored into the ratings, returning at the Masters from a
one-car crash that left him severely injured and with a reconstructed
right leg and ankle.

Woods also has played a part in another potential factor in the increase in golf’s popularity – diversity.

However, Stewart believes diversity in golf is improving.

“A personal friend of mine, Christyn Carr… Grant Thornton, it’s an
insurance company. They got in touch with her,” Stewart said. “She’s a
college student right now and goes to an HBCU (North Carolina A&T).
They reached out to Mariah Stackhouse and two other pros as well to do a
commercial. They played a couple holes, and instead of the hole saying
it’s a par 5 or a par 4, they called it equality or inclusive.”

Steps like this, as well as continuing to build off of the current momentum, could pave a bright future for the sport of golf.