MSU’s James Piot is recognized for winning the US amateurs 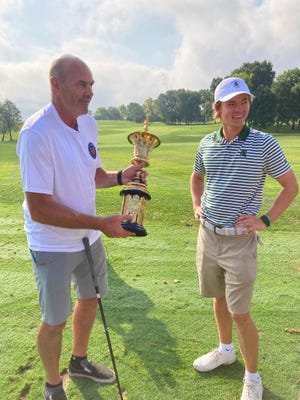 Oakland Twp. – To say the past week has been a whirlwind for James Piot would be an understatement.

Eight days ago, the Michigan State golfer won the US Amateur at Oakmont Country Club near Pittsburgh, becoming the state’s first golfer to win the Havemeyer Trophy. It’s been a blur since then, an electrifying handful of days where first place was thrown at Comerica Park last week and Monday culminated at Wyndgate Country Club, where former Spartan Kirk Gibson hosted his annual golf outing on behalf of his Parkinson’s Foundation.

“I actually lost track of time, it was that crazy,” said Piot. “Life was very different, only the people who got in touch and saw the support from Michigan was the coolest thing ever. And I’ve actually been recognized in a couple of public places so I feel a bit like a celebrity.

“I tell people that it feels like every other week, I just woke up and was lucky and won a golf tournament. It changed my life so it was phenomenal. “

At Monday’s event, Piot did not play golf, but enjoyed chatting with those preparing for the course while he posed for several pictures with his trophy.

More: “Nobody works that hard”: MSU Senior James Piot’s rise to the pinnacle of amateur golf was no accident

This included Gibson, who greeted Piot on the driving range.

“It’s an honor to meet you,” Piot said of Gibson, the two-time World Series champion with the Tigers and Dodgers, NL MVP and Michigan State Hall of Famer from his days as a football and baseball star with the Spartans.

“How did you like my tutoring?” Izzo joked as he put an arm around Piot.

The two laughed as Piot recounted the final holes in his come-from-behind 2-and-1 win over Austin Greaser of North Carolina.

Piot will begin classes next week for his senior year at Michigan State and is preparing for the Spartan fall season to begin in just two weeks or so.

He’s working on getting stronger to add some length from the tee, but otherwise the focus will be on getting “back to normal” and getting back into his game.

“I’ll just enjoy the moment and focus,” said Piot. “We have a college season ahead of us in a week and a half in the north, so I’ll just enjoy my senior year and keep getting better.

“I’m getting this emotional high right now and it was kind of crazy. But I’m really looking forward to being a student at Michigan State again. This is my favorite place in the world, so it will be fun. “