Phase I of the East River Development Project begins in Houston 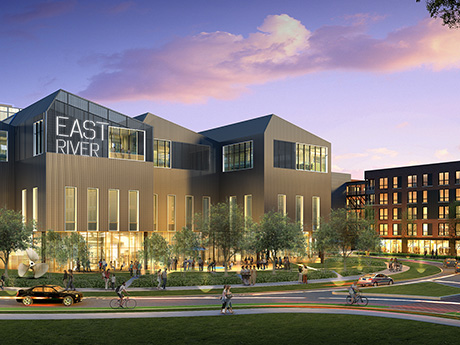 Midway, a Houston-based real estate developer, pioneered the East River Development project proposed on 150 acres of land. This project is a mixed-use development located one mile on the north coast of Buffalo Bayou in the fifth district near the East End district.

The master plan for this project includes entertainment buildings, office space, gastronomy and retail space, which will be implemented in several phases over several years. Midway bought the East River Development about 4 years ago, and their then plan for the 150-acre property included building 1,440 apartment buildings, 475 single-family homes, 390 hotel rooms, and 8.9 million square feet of office space.

In addition, three tenants have been announced for the buildings in the first phase of construction. Building C, which is 9,000 square feet in East River 1, will house Method Architecture, a Houston-based architecture firm; 12,000 square feet of Building C are also leased for Teal’s headquarters; and Building F will house the Astorian’s new event space and a rooftop bar in an area of ​​20,000 square meters.

The East River Development project will also include a golf course with an attached restaurant and a bar in the courtyard. The course, known as East River 9, will be a 9-hole, par 3 course for public use and is expected to open on the East River property in 2022. The design of the golf course includes holes from 80 to 150 meters, natural grass, a 300 meter long driving range, a 12,000 square meter common room and a 1,000 square meter pro shop.

The development team for the East River Development project consists of a variety of architecture and engineering firms. Some of these firms include OJB landscape architecture; Burton Construction, a construction company; Harper Brothers, a commercial general contractor; Daly, a commercial civil engineer; and also Telios, a commercial mechanical, electrical, and plumbing company.

Midway President Jamie Bryant indicated that the project aims to set the tone for a world-class, community-oriented travel destination by connecting the Houston metropolitan area with green spaces, functioning transportation and improved infrastructure.