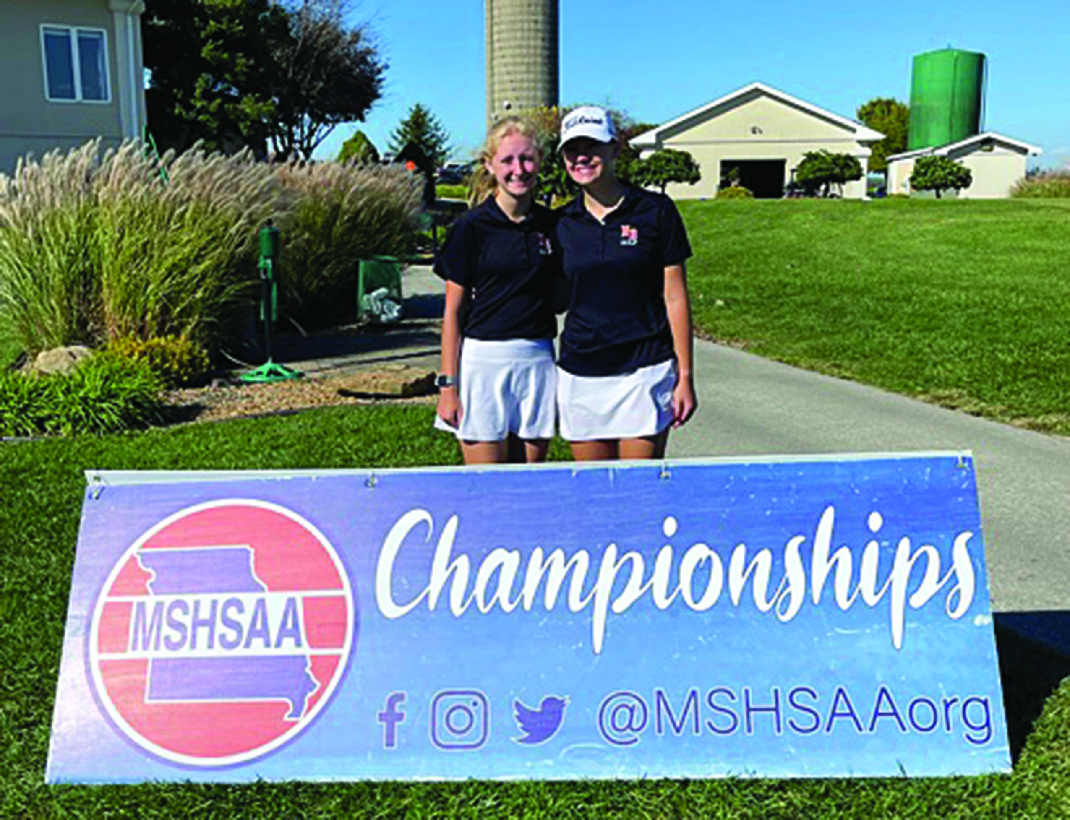 The Moss family was this year at the Class 1 Girls Golf State Tournament from 18-19. Strongly represented in Bolivar in October. New Bloomfield senior Sylvia Moss and sophomore Dixie Moss qualified for the state after their trip this year.

Sylvia and Dixie thought their dedication and extra work was key to their return this year, giving them a chance to beat last season’s results of a fifth, 183rd place for Sylvia and a 22nd place, 209th place for Dixie. Starting on the driving range with her grandmother in third or fourth grade, this year Sylvia thought that she would have room for growth in her putting towards the end of the season. In Dixie’s most recent campaign since starting her trip in fourth grade, she thought her approach to irons would take some work to reduce shocks after her first ride.

“We practiced when we had extra time,” said Sylvia. “To stay a few times after your workout to hit a few balls, or stay on the putting green longer than you are told, just to solve a few problems you know you will have . As a golfer you know what to fix it. You need to be able to invest the time to fix the problem. “

“This year my goal was to keep up with Sylvia,” said Dixie. “I practiced a lot with my grandmother almost every day this summer.”

Head coach Joe Robinson said while the Lady Wildcats were performing two in the state, there were 12 girls who came to golf this year. Most of them had no golfing experience but felt they could learn if they invested their time like the Moss sisters.

Robinson said the sisters were great verbal and non-verbal leaders in helping the team score high in multiple meetings and tournaments.

“The most important thing I think is that they have always worked to get better,” said Robinson. “They were always one of the first there (during training) and were always the last to leave. If you’re committed and really working to improve, that’s how you do it. Had trouble, they tried to help them and were receptive to learning. “

Sylvia not only managed to announce her last two years at New Bloomfield, but also both times with all state honors and finished an 11th this season.Sylvia said that the performance and success last year were more of a surprise for her, because the level of competition was so high, but she felt more confident this year after playing at that level.

She and Dixie took a day to adjust to the course at Silo Ridge Country Club after realizing it was bigger than they thought it was and dealing with numerous greens that were inclined rather than flat Robinson said, but the sisters finished the second day on better grades than the first.

“It was a much longer course than we were both used to. That aspect not only gave a blow to our two games, it gave a blow to all games,” said Sylvia. “It was a long, difficult course with difficult greens. On the first day we both had very rough and stressful days and on the second day we played better, but not our best.”

“The course was super long and probably one of the toughest I’ve ever played,” said Dixie.

The days they spent in the state brought with them emotions that ranged from excitement to stress to fatigue, and finally pride that they had earned the right to compete on a course that was one of the most beautiful and at the same time most difficult courses, said Robinson. The sisters were also grateful for the support they received from friends, family, and their school in keeping them going.

For Sylvia, being an all-state golfer in such a talented group is a real reward, not just for the accomplishments but for the confidence she has had this year. As for Dixie, she does a year where she has two opportunities to play with girls, most of whom are older than her, proud of their past and excited about their future.

“My first year it was very surprising because I played with girls who were much more skilled than me. When I got there last year, it kind of raised my standards,” said Sylvia. “This year we played on a tougher course, but I felt like I had more chances to make it because since I did it last year, I’ve been able to do it again.”

“After the state finished I was really impressed with how I played with the conditions and the course and played with girls older than me and was just glad I was there,” said Dixie.

Not every golfer will qualify for the state, Robinson said, but seeing that Sylvia has played a leadership role in her four years and that is expected of Dixie in her last two years shows the other girls are getting better at golf, is a matter of surrender. It’s never too late to take on the sport, he said, as demonstrated by senior Jill Pry, who made her debut for the Lady Wildcats this season.

Like the Moss sisters, Pry persisted and got good results that season, so Robinson had Pry as his # 3 golfer and even thought she had a legitimate chance of being a state qualification if not for a few holes in the Districts. So all newbies who have come out this season can be sure that at least the fun on the pitch is within reach.

“The girls who were new have literally never played golf or swung a club until they came out to practice,” said Robinson. “Sylvia and Dixie have been really excellent leaders. I hope you can pass the idea on to other students, when you are ready to come out and work, you can become a good golfer. I think that’s why we had so many this year Girls, you heard about the success last year. “