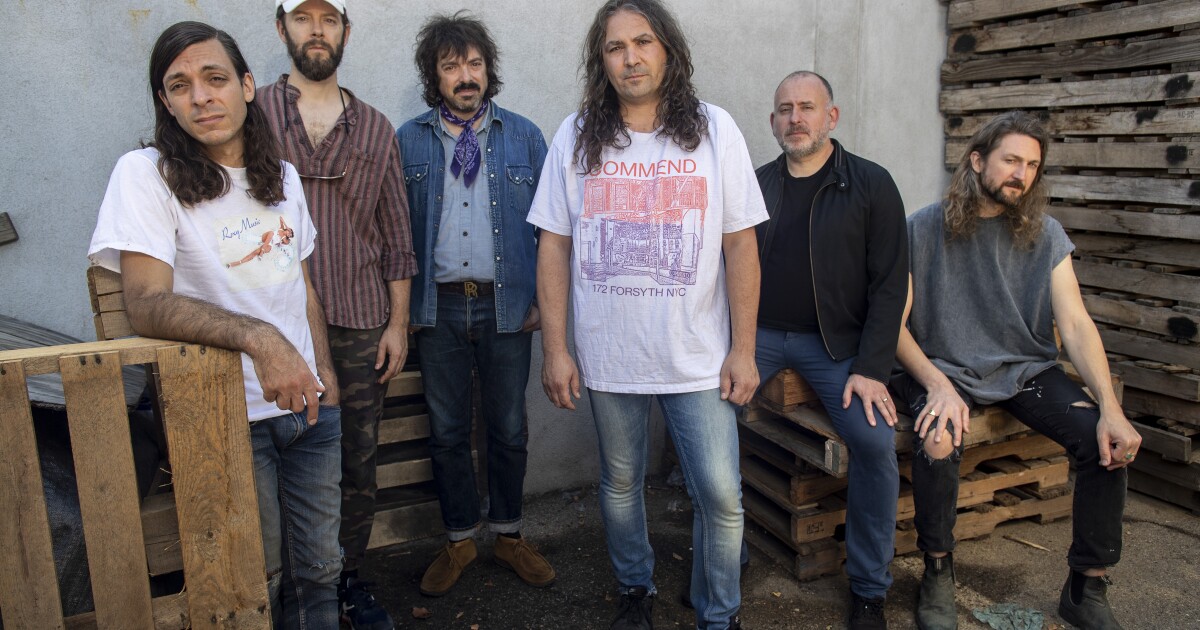 Adam Granduciel refused to move to Los Angeles for years because he didn’t want to be seen as the villain in a Bruce Springsteen song.

“You know that part of ‘Racing in the Street’ where he talks about knocking the guy from LA off the track?” Asks the front man and creative thought leader of War on Drugs, referring to Springsteen’s drag racing epic from “Darkness on the Edge of Town”. “There’s this live version that I love where he does that line and everyone at Giants Stadium is cheering – like, ‘Yeah, f – that guy!'”

Granduciel, 42, a proud East Coast citizen whose band appeared in Philadelphia’s rugged, tight-knit indie rock scene, feared that going west would mean a career reorganization of his priorities – “a replacement for something I’m not ready for was “. detached from appearing, ”as he puts it.

But the family waved: In 2019, his son was born to actress Krysten Ritter, and so Granduciel settled down after a long commute between Philly and LA – not to mention a Grammy win that already said a lot about his career path Valley, not far from a driving range where he would spend a lot of time outdoors after the COVID-19 pandemic. (The child’s name, in case his father’s loyalty to the boss was not clear, is Bruce.)

Now The War on Drugs are releasing a shiny new album, “I Don’t Live Here Anymore”, which, despite Granduciel’s fears, reflects something of his adopted home. The follow-up to “A Deeper Understanding” from 2017, which received rave reviews and beat LPs from Metallica and Queens of the Stone Age for the rock album Grammy, “I Don’t Live Here Anymore” still draws on the eternal dad – Rock wellspring – think Springsteen, Bob Dylan, Neil Young, Tom Petty – that inspired Granduciel to start the band in 2005.

But where War on Drugs ‘earlier albums stretched those influences to trippy psychedelic extremes, this one is catchier and more compact, with a shiny’ 80s throwback production job and an emphasis on Granduciel’s parched vocals that are reminiscent of the days when grown white boys could Wear stylish trench coats and play in atmospheric black and white videos on MTV.

“I think the first thing anyone would notice about the album is that it has a lot less lengthy guitar solos,” says Steve Ralbovsky, the veteran A&R manager who signed War on Drugs with Atlantic Records (and before that the Strokes and Kings identified). von Leon as unkempt rock acts with potential crossover appeal).

The band even did one of those old school videos for the LP’s shimmering title track, in which Granduciel strolls down the beach with narrowed eyes before putting on sunglasses to watch the LA skyline with his bandmates on a windy rooftop Jamming back.

“‘The End of the Innocence’,” he says of Don Henley’s perfectly airbrushed ballad, “is definitely my s-“

Adam Granduciel from War On Drugs performs in 2018.

One wouldn’t say the music threatens to transform the happily wrinkled Granduciel from a cult favorite to a pop idol. After years in which rock moved further and further away from the mainstream, the vintage sounds that have long fascinated it have re-emerged in fashion with some top-class guys: Last year the Killers asked Granduciel, on their album “Imploding the Mirage” to participate; This year, John Mayer picked up a Clapton-discovered-the-synthesizer vibe for his obsessively detailed “Sob Rock”. (“John Mayer’s new song sounds like the war on drugs,” reads the headline of a Stereogum post.)

Granduciel gently dismisses the comparison as he reclines in a worn leather armchair in his rehearsal room in Burbank while drinking a diet Coke. “His things are so clear and well-considered, which is totally cute,” he says of Mayer, from whose album he heard “a few songs”. Clad in a t-shirt, basketball shorts, and a 76ers hat, Granduciel is a little sweaty from storming home after trying to bring Bruce over for a nap and failing. “But I don’t know how to take a picture that dials in.”

With intricate grooves and beautifully rendered textures, “I Don’t Live Here Anymore” – which Granduciel co-produced with Shawn Everett, who also worked with Kacey Musgraves and Haim – suggests otherwise. So does this room, which is filled with dozens of guitars, keyboards, amps, and pedals, each of which Granduciel can identify with a litany of statistics. He didn’t sign the lease for the place until March, but it “looks like the inside of Adam’s head,” says Dave Hartley, bassist for War on Drugs. (The other members of the band, who live across the country, include guitarist Anthony LaMarca, drummer Charlie Hall, keyboardist Robbie Bennett, and saxophonist Jon Natchez.)

Last year the Rolling Stones hired Granduciel to remix “Scarlet,” an unreleased 1974 cut with Jimmy Page on guitar and, as Granduciel was told, Creams Ginger Baker on drums. It turned out that Baker wasn’t on the line, as Jagger later clarified on the phone, which made Granduciel feel better having replaced the drums with his own. “I laughed about it with Mick,” he says. “Broadened my horizons.”

The War on Drugs recorded much of the new pre-pandemic album at prestigious LA studios such as Electro-Vox, EastWest and Sound City. “Studio B at Sound City”, Granduciel specifies with characteristic precision. But during the pandemic-related shutdown, the frontman – widely understood as some kind of benevolent dictator since the band’s inception – began soliciting remote contributions from his bandmates; he often loved what they put down without looking over their shoulders.

“I think he realized that if you let people see your process a little, it doesn’t take away from his creative powers,” says Hartley.

Granduciel also recruited outsiders, including musicians from LA Dawes and Lucius, the female vocal duo who perform with real classics like Roger Waters and Jackson Browne. “Adam visited us on tour with Roger a few times,” says Jess Wolfe of the duo, “and I think he was moved by what we brought into this very masculine scene.” a welcome tenderness that contrasts with what might have been coldly technical.

As deep as the frontman is rooted in the traditions of guitar music – according to the liner notes of the album, “Old Skin” can be heard with Granduciel on “Walter Becker’s old bass” – his curatorial approach is not entirely different from that of a hip-hop producer; he builds a soundscape from many different parts and sometimes uses almost quotes from old songs like dusty samples: the synth lick from Tears for Fears’ “Head Over Heels”, for example, in the title track of the new album or the drum machine beat Phil Collins’ “In the Air Tonight” in the breathing “I Don’t Wanna Wait”.

“The CR-78,” he says of the primitive Roland device featured in Collins’ song. “I used the same machine – well, actually it’s only in an app on my phone.” He grins and pulls it out of his pocket. “It’s called FunkBox.”

Lyrically, “I Don’t Live Here Anymore” feels shaped by Granduciel’s parenting; The album carries vivid, if vaguely worded, thoughts on time, connection, and memory. He points out, however, that he wrote many of the songs before Bruce was born, including the stormy opener track “Living Proof,” which is “all about the promises you make to yourself how to make them into them The next phase of “entering your life will be a different, more grounded person.

“Sometimes I listen to it and pretend I wrote it about a child,” he adds with a laugh.

Granduciel’s own childhood was pleasant. He grew up with two siblings near Boston, where his father owned a discount store selling women’s clothing – “Ellen Tracy jeans with missing belt loops, things like that” – and his mother worked as an assistant at a Montessori school. He studied art history at college in Pennsylvania, later worked in a number of unsatisfactory jobs in Philadelphia before becoming friends with Kurt Vile, also a Springsteen-loving singer and guitarist; Granduciel played in Viles’ band The Violators and Vile played in War on Drugs before they parted ways on friendly terms.

When the 2011 War on Drugs began around the album “Slave Ambient”, Granduciel’s father told him to include hats in the band’s merch. “He said, ‘You buy it for 2 and you sell it for 6,’” Granduciel recalls. Nobody bought them, but the singer was so touched by his father’s interest in his work that he kept all the hats. “You’re in a Tupperware store somewhere,” he says.

Granduciel, who is generally warm and talkative, prefers not to speak publicly about his relationship with Ritter. After our conversation, tabloid reports surfaced saying the couple broke up, although Granduciel denied this to the New York Times.

He is more open about how family life could change his career in the future. Before the pandemic, the War on Drugs had built a reputation as a live knockout act; it’s slowly venturing back on the streets with a headlining gig at next month’s Desert Daze Festival in Riverside County ahead of a tour in early 2022 that stops at New York’s Madison Square Garden.

But being home for the first two years of his son’s life changed Granduciel’s thoughts of being away for weeks. “We’re the first generation in a long time – just like them – to spend so much time with our children,” he says. “I asked my father how much time he took after I was born and he said, ‘Forty-five minutes? The next day I went to work. ‘”

Aside from completing his album and “hanging out with Bruce,” as he puts it, golf was Granduciel’s chosen pandemic pastime; he even sings about “living down by an old par 3” in the Dylan-like conclusion of the LP, “Occasional Rain”. When asked if he’s started advocating for LA’s professional sports teams since he took root in the city he once avoided, he replies that the Lakers were never an option for a childhood Celtics fan.

“But my favorite moment in sports history, even after attending some classic Larry Bird games as a kid, is Kirk Gibson’s hind leg homerun,” he says, referring to the former Dodger’s famous walk-off in the 1988 World Series. “I still get goosebumps when I see it. So I could probably justify wearing a Dodgers hat. “