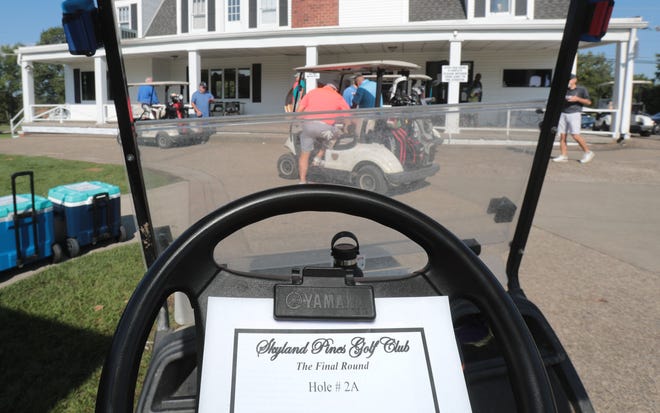 Working with his older brothers at Skyland Pines was a summer vacation job for Dave Mickley while he waited to be shipped to Vietnam.

Mickley was only 23 years old and had been out of college for a couple of years. Mickley was teaching at Jackson High School the year before, but he didn’t like the job. He also knew that military service was imminent.

Older brothers Carl – known as Bud – and Louis Mickley bought the Highland golf course at auction in late 1968. They had plans to modernize the sprinkler system, rejuvenate the clubhouse and improve the driving range.

Before the 1969 season began, the Mickley brothers and their wives decided to rename the then 40-year-old course. They chose Skyland Pines because of the open views and the abundance of pine trees, said Dave, who lives in North Canton.

More:Yes, Amazon will fulfill orders from the huge warehouse planned for Skyland Pines

Dave recalls mowing towards the south end of the course when someone approached with a golf cart. Louis had been injured. They rushed back to a shed that housed a 3,000 gallon water tank.

An electrician and Louis worked on the tank the day before and installed a pump. A pressure relief valve did not work and caused the tank to explode.

According to reports, part of the tank blew up the north wall of the shed. Another large section struck Louis.

Dave remembers approaching the shed and saw his brother try to get up but he couldn’t. An ambulance was called and Dave drove Louis to Mercy Hospital, but it was too late.

“I think he was gone. He was just gone, ”said Dave.

The Mickley family had 10 children, Dave being the youngest. His older brothers Louis and Carl were business people.

Louis owned the PDQ, a drive-in eatery on US Route 62, and his brother Gary ran the place. He was also president of the Stark County’s Restaurant Association. Before buying the restaurant, Louis worked as a lineman at Ohio Power.

Louis also enjoyed playing golf and had competed in the Stark County amateur tournament. That may have played a role in the decision to buy the course, but most likely Louis and Carl saw the course as a business opportunity, Dave said.

The Mickley family’s association with the golf course did not last long after Louis’ death.

According to a March 1970 article in the Repository, Carl sold his stake to Nina Mickley, Louis’ widow. The couple had only been married a few years before Louis died.

In December 1972, The Repository reported that Nina was selling the course to Salvatore “Junior” DePietro.

At that time, Dave Mickley had served in Vietnam as a member of the 101st Airborne. He returned and accepted a job with the Ohio Parole Department.

According to repository stories, golf arrived in Stark County in 1900.

Elizabeth Harter decided to dig holes on her family’s farm on the west side of Canton along the road to Massillon. For several years, local residents played the course called Highland Links.

Bordner had a competition to name the course and there were several hundred suggestions, according to the newspaper. William H. Cox, a manager at Stark Dry Goods, won on the “Highland” submission because the course was built on highlands.

The 43-year-old Bordner owned it only for a short time. He was among a foursome that played on June 9, 1929. After making fun of having fun with others in the foursome, Bordner collapsed and died after hitting his approach shot on the 17th hole.

A look back at the history of the Skyland Pines property:

June 1929 When playing with a foursome, Clark E. Bordner collapses near the 17th green. He dies before he reaches Mercy Hospital.

November 1939 The original clubhouse is destroyed in a fire.

April 1940 The story of the Canton Repository tells of Iva Metzger and her children who are taking the lead on the course. Metzger is SP Eby’s granddaughter. Dr. OL Sommer, another descendant of Eby, is a co-owner of the course.

January 1952 Akron’s Warren Miller takes over the operation of the golf course.

April 1969 The course will reopen under new management and renamed Skyland Pines.

December 2005 The DiPietro family is considering the option of developing properties for housing but the plans are canceled.

April 2007 The DiPietro family sells the course to Mike Monastra.

May 2021 The course owners are calling for the property to be rededicated for light industrial use. Steve DiPietro said the change is necessary to better position the property if an opportunity arises.

July 2021 Steve Dipietro confirms that Skyland Pines will be sold and developed. The course ends on September 6th.

August 2021 Plans made available to the cantonal building authority show that a 1 million square meter warehouse is planned for the golf course property.

September 6, 2021 The final rounds will be played at Skyland Pines.