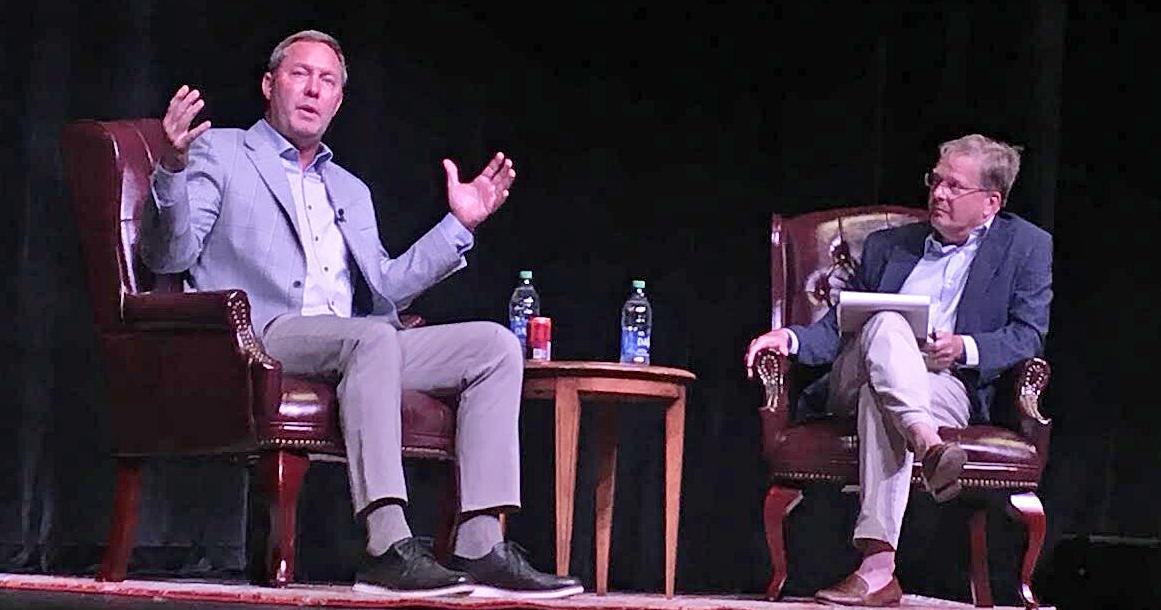 Finishing a round of golf a few weeks back at Pinehurst Resort, Mike Whan couldn’t help but notice the bustle of activity. There were players teeing off or finishing their game. Thistle Dhu putting green was awash with people, and Pinehurst’s short course, The Cradle, was rocking, of course.

“And it was every age, different colors, different genders. For a guy that runs the USGA, it is the kind of snapshot you want to take,” said Whan, who assumed the helm last summer, becoming the eighth top executive in the USGA’s history. “Compare that image to one taken 30 years ago when most of the players were white, old and rich men. ”

Diversity is a key factor in golf’s rise in popularity and also speaks to the specialness of the Sandhills and Pinehurst, in particular, as the home of American golf.

Whan was the keynote speaker Thursday afternoon at an event sponsored by Moore 100, a subgroup of Partners in Progress, Moore County’s economic development arm. The discussion, led by David Woronoff, publisher of The Pilot, was held in the Owens Auditorium at the Bradshaw Performing Arts Center, on the campus of Sandhills Community College.

Prior to joining the USGA, Whan served as commissioner of the Ladies Professional Golf Association for 11 years. During his tenure, the LPGA increased the number of tournaments on the schedule to 34 from 24, increased purses from $41.4 million to $76.5 million, and grew television hours from 125 hours per season, to over 500 hours. The LPGA also became a truly global business under his leadership, with players, tournaments, sponsors and fans coming from all over the world.

With Thursday marking the first day of play for the 77th Women’s Open — a championship that comes with a record $10 million purse — Whan believes that the USGA’s sole responsibility is to leave the game better than it is now for the future.

“The one thing the USGA has fallen behind on is advancing the game. USGA is the world’s greatest check writer. But being a check writer and sticking your neck out there are not the same,” he said, outlining what he calls big, bold leadership steps that will require a commitment of tens of millions of dollars over the next few decades.

“We need to spend money so the things that trouble our game don’t stop it. We need to make sure it will thrive for years to come.”

The USGA also works to unify the game — worldwide — through consistent standards for course ratings, handicapping, governance of rules and equipment testing.

But the most public face of the USGA is its championships for men, women, juniors, seniors, amateurs and, for the first time later this summer, the US Adaptive Open, for golfers with physical, visual and intellectual impairments.

Whan said the adaptive championship idea was encouraged when Paralympics officials approached the USGA about adding golf, a decision that followed the International Olympic Committee reinstating the event for the 2016 Summer Olympics.

Initially skeptical about putting golf in the Olympics, Whan said he discovered that in most countries around the globe, podium sports — that is, Olympic events — are viewed more positively and attract significant investments, often from the countries themselves.

“When they added golf to the Olympics, it went from this thing your grandparent might play to this thing where you have kids playing everywhere. There are driving ranges all over China,” Whan said.

As the then-LPGA commissioner, Whan said he witnessed a game-changing moment in the sport not for men – but for women.

“I went from being a doubter to all-in on Olympics. So when I was approached by the Paralympics, we realized we weren’t prepared because we didn’t have a groundswell (of players coming up in the ranks). So we decided to create a national championship, and that has created a qualifying tournament system.”

“I think the most interesting thing I’m doing this year will be going to that championship,” Whan said, noting that Pinehurst No. 6 was specifically chosen because of its gentle contours. “We don’t want the challenge of this event to be getting to the tee box. We want it to be getting the ball to the hole.”

Whan also has thrown down the gauntlet on what he unofficially describes as “Team USA,” a $50 million vision to developing top golfing talent here at home.

“We are going to find the best players in each group and then use our partner programs to bring them to, say, a place like Pinehurst. We will take them to Pebble Beach. We will get them ready on the mental side, to learn how to get over a bad round. Most of these kids haven’t learned how to fail yet. And the difference between playing in college and professionally is night and day. If you are in a country program, they are talking about that but we are not talking about that here in America.”

Whan said all you have to do is look at the leaderboard this week at the 2022 U.S. Women’s Open, or any major tournament.

He noted the game is “stupid diverse” when you look at 12 year olds, “but by 18 years it is gone. It is back to 80 percent white males. It is a shame. We’ve done all this work to address diversity in the sport at this young age and then let it go.”

Expense is the primary culprit, he noted, adding that most families cannot afford to raise an elite-level college athlete. Whan recalled that Tiger Woods’ parents took out a second mortgage on their home to carry his future forward when he was a teen.

“With a $50 million grant program, the USGA can assist families who have children with the talent to continue. Mexico does it, Canada does it, other countries do it. We are going to do it.”

Woronoff noted that 49 of the women in the 2022 U.S. Women’s Open field had come through the U.S. Kids Golf and the World Championships in the Pinehurst area, an incredible statistic and a tribute to U.S. Kids Golf development of the game of golf.

“I’d encourage the USGA to continue working with them. This is a great initiative,” Woronoff said.

Whan also noted he is working on a plan to endow the USGA’s amateur teen championships to ensure they will continue in perpetuity, regardless of future financial considerations. “We are looking for 20 people to donate a half-million and we are halfway there. These will be our angels of amateur golf.”

Looking to the near horizon, USGA will break ground on its new $25 million Golf House Pinehurst campus on Monday. This second headquarters will help the USGA expand its impact in golf and extend its mission to champion and advance the game. Pinehurst Resort will also serve as USGA’s first “anchor” site for the U.S. Open, with championships scheduled in 2024, 2029, 2035, 2041 and 2047. Over the 25-year period, these events are projected to have a $2 billion economic impact on North Carolina.

“We will attract people to our building and what will soon be announced,” Whan said, teasing a proposed project that is still under wraps. “We encourage you to come be a part of our community. Volunteer when our championships are in town. Be a walking scorer, volunteer on the tee box. We’ll get to know you but, please, get to know us too.”

← Smith, Hughes and Lee among six tied for PGA Memorial lead This is definitely the craziest hole-in-one story we've ever heard | Golf News and Tour Information →