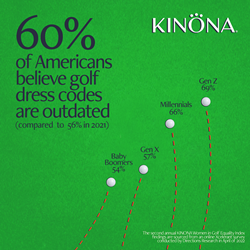 KINONA, the women-led, women-inspired golf apparel company released the results of its second annual Women in Golf Equality Index, tracking evolving perspectives towards the sport and women in golf. The survey of 1,044 U.S. adults aged 18+ reveals a majority belief that golf dress codes are outdated as players shift to more fashionable and casual wear, provides evidence of gender bias in the sport, calls for equal visibility and treatment for women golfers, and identifies participation trends. Results include:

“As a women’s golf clothing company, we are always pushing for more open-mindedness in the sport and want women to play the game their way,” said KINONA Co-Founder, Tami Fujii. “The survey reveals that there is a desire for more inclusiveness, from golf attire, to equality, and beyond. We hope we continue to see growth in the sport for everyone, including more opportunities for women golfers.”

Additional consumer insights on golf fashion and apparel include:

The second annual KINONA Women in Golf Equality Index findings are sourced from an online Xcelerant survey conducted by Directions Research in April of 2022 and commissioned by KINONA. The survey was conducted April 13-14 and April 16, 2022 and distributed to a sample of 1,044 U.S. adults 18 years of age and older, with a 95% confidence level.

KINONA is made by women golfers, for women golfers. Founded in 2017 by friends and corporate executives-turned-entrepreneurs, Dianne Celuch and Tami Fujii, KINONA is committed to making golf more accessible and fun for all women by bringing chic, contemporary, and functional fashion to the fairway. KINONA’s fun, course-tested styles made with Italian fabrics, sun protection, and signature features like tee holders and back pockets, shift the paradigm of “appropriate golf attire” and inspire women to play their game, their way.

Be part of the wave of change in women’s sports with category-redefining apparel from KINONA. Visit http://www.kinonasport.com for more information.

← A league of their own PGA Championship 2022 best bets: Props, sleepers, head-to-head matchups, one and done picks by top golf expert →