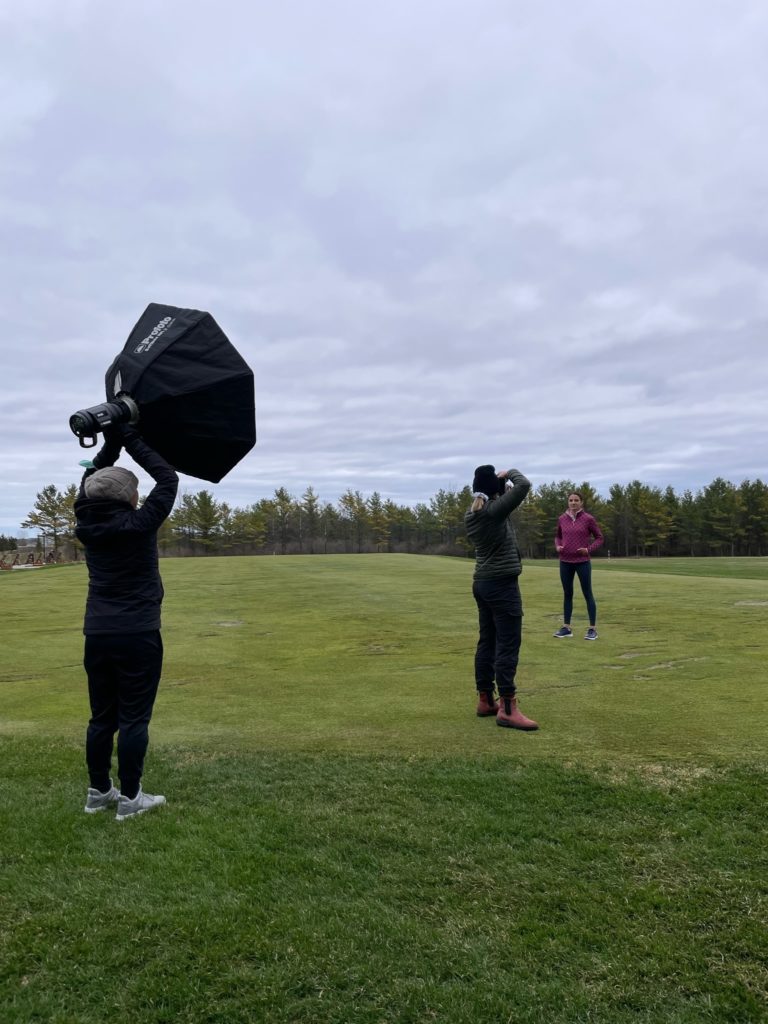 Motorists on Highway G might have thought Horseshoe Bay Golf Club was hosting a college golf match or lessons the first week of May, when a couple of groups of seven young men and women – clad in clothing suitable for cold, windy days at the British Open – milled about on the fairways and tees, some taking practice swings.

But they weren’t there solely to play or practice. Instead, they had come to the private club south of Egg Harbor to work as models.

FootJoy, a major manufacturer of golf apparel and shoes, had chosen Horseshoe Bay and courses in Norway and Australia as their ideal locations to showcase different layers of their product, said Jamie Christianson, Horseshoe Bay’s head professional.

The photo and video shoot was called “Travel Bag.”

“FootJoy was highlighting their outerwear, mid layers and new women’s clothing,” Christianson said. “Their idea was to showcase what you may need to pack in a ‘travel bag’ when golfers visit different regions of the world.

FootJoy representative Jason Looman said the company chose the Door County site because of the relationship it had developed with the staff during the past four years.

“The staff at Horseshoe Bay has welcomed us with open arms and has shown us genuine care during our visits to Door County,” Looman said in a message relayed through Christianson. “Horseshoe Bay is one of my favorite places in the country. It truly is God’s country, and FootJoy needed to be a part of a place this special.”

Christianson said a couple of the models have played on the men’s and women’s professional circuits for aspiring pros who are on the verge of breaking into the PGA and LPGA tours.

All Door County golf courses saw a flurry of activity in late April and early May as greenkeepers got the links back into shape and golfers returned for the season.

Some courses have had more work to do, however, than turning the water back on and aerating the greens.

At Alpine in the Village of Egg Harbor, a steep slope and years of shade from trees and a cliff contributed to the demise of one green just north of the clubhouse. Golf manager Simon Ward is passionate about getting the old course into the greatest shape possible by Memorial Day, and he’s worked with several consultants for solutions.

The green for #17 (formerly the first hole on the old Blue Nine) needed a quick overhaul, so Ward sought out the best turf for greens, fringes and tees, and placed an order with Green Source USA in Marengo, Illinois, which provides sod and assistance to golf course venues and professional sports stadiums nationwide.

During the first weekend of May, Alpine staff members received and then rolled out new bentgrass sod for the green on that hole, as well as low-mow bluegrass sod for a couple of tee boxes that had suffered from lack of sunlight.