In Golf-Rich Country, Pine Needles Revels in Its Niche | The Pilot Open Daily 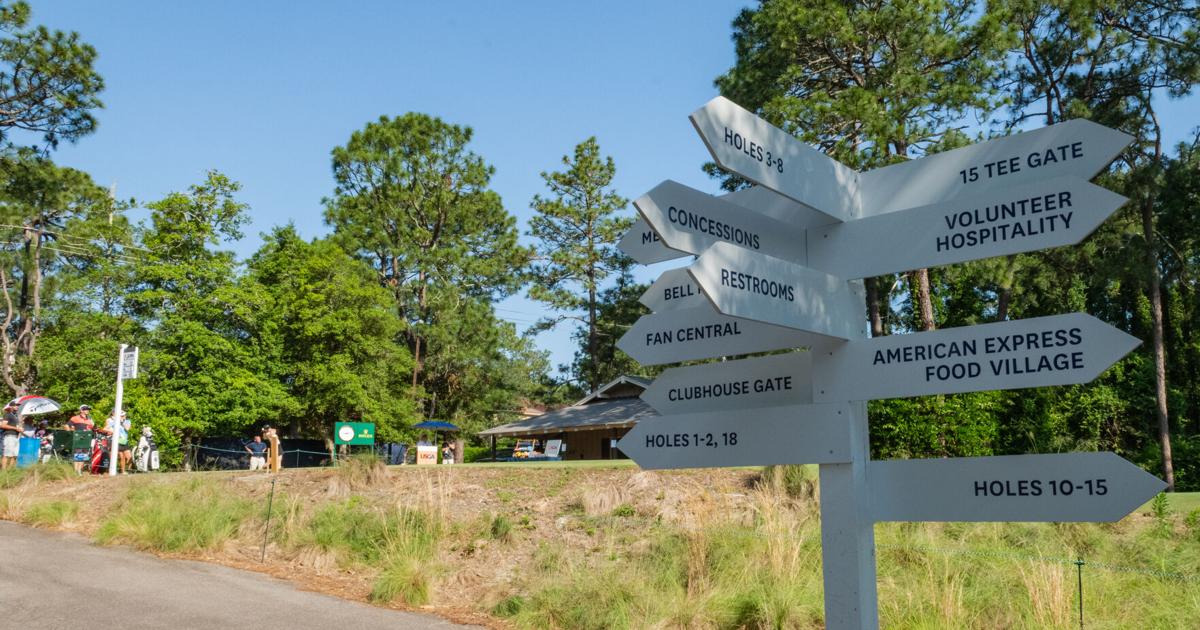 Kelly Miller can still see his mother-in-law, the late great Peggy Kirk Bell, working her magic at Pine Needles Lodge and Golf Club, spreading the game and the joy of life like she was sprinkling pixie dust on the thousands of guests to her corner of heaven in the North Carolina Sandhills.

Bell was many things — a pioneer in women’s professional golf, an exceptional teacher and her own pilot for a time — but more than anything she was a joyful force of nature, living 95 years until her death in 2016.

She is why the U.S. Women’s Open came to Pine Needles the first time in 1996 and has made three subsequent return visits, the latest coming this week as the USGA seeks a champion to stand alongside Annika Sorenstam, Karrie Webb (2001) and Cristie Kerr (2007) as winners in this golf-happy place.

“It’s a tribute to (Bell) and the community and the state,” said Miller, president of Pine Needles, which also owns Mid Pines Inn and Golf Club and Southern Pines Golf Club. “Our relationship with the USGA started with Mrs. Bell being on the Curtis Cup team (1950) and later with her friend Judy Bell, who was president of the USGA.”

It is Miller’s charge — and passion — to build on what Bell and her husband Warren (known to many as Bullet) took ownership of in 1954. With his wife, Peggy Ann, his sister-in-law and her husband, Bonnie and Pat McGowan, along with business partner Haresh Tharani, the business of Pine Needles is thriving.

The old adage that real estate is about location, location, location works to Pine Needles’ advantage because there is no more golf-centric place in this country than the Pinehurst area, where more than 40 courses exist almost shoulder to shoulder.

It heightens the challenge, too. Pinehurst Resort with its famed No. 2 course is less than a 10-minute drive away, and the resort’s reach is growing with hotel enhancements, a popular new short course, the creation of a brewery and other updates.

Meanwhile, Pine Needles with its two sister properties is its own destination, a collection of three Donald Ross-designed layouts tucked in among the sandy soil, the pine trees and situated beautifully between Southern Pines and the village of Pinehurst.

It sells itself, and the jammed tee sheets and hotel reservations prove it.

“Pinehurst Resort and (president) Tom Pashley are great friends,” Miller said. “We try and get together for lunch regularly, and when people see us, we joke that we’re setting the rates for next year.

“I’m a big fan of Pinehurst and always have been. They are the leaders here, and I hope they’re full 100 percent of the time. They lead the area, and if they are doing well, generally everyone else is doing well.

“But it’s a different feel at Pine Needles. Some choose ours, some choose theirs.”

What Pine Needles is selling is itself, and that means more than a round of golf or a night in the lodge there or across the road in the big white hotel at Mid Pines. It’s about a feeling, one that germinated in the 1950s when the Bells took over, and it endures today.

Though the clubs have approximately 400 members, the bulk of play is from resort guests who come for days — and sometimes weeks — at a time. If there is a secret to the Pine Needles formula, it’s how visitors never feel like customers. They are embraced as a part of the place, whether it’s a short visit or a longer stay.

“All of us from me to (former president) Don Padgett (II) to Tom, it was much better for us to have a wonderful business, uniquely different from us, just down the road than to not have it,” said Pat Corso, also a former president of Pinehurst Resort, who went on to run an economic development group in Moore County where the resort is located.

“It is an asset to us, a tremendous asset. Look in our area, yeah you have 40 courses, but you have two premier resorts. We would reach out all the time with each other. It was more about being friends. You couldn’t be better friends with some. In business I don’t even call them competitors.”

Miller has played amateur golf successfully on the national level for a long time. A former University of Alabama golfer, Miller has won — among other titles — the Azalea Amateur, the Coleman Cup, the North Carolina Mid-Amateur and the Carolinas Mid-Amateur, and his brother-in-law McGowan is a former PGA Tour player. So Miller is a man of golf in one of the country’s great golf families.

Through the years, Miller and Pine Needles have made prudent decisions. When the opportunity came to buy Mid Pines across the street, Miller added it to the portfolio, getting friends within golf to help him put the purchase together.

In 2013, Miller brought in designer Kyle Franz and let him freshen up the original Ross design. The result was a spectacular upgrade that accentuates the artistry of Ross’s design while incorporating the scruffy, Sandhills look for which the area is famous. Mid Pines soared in popularity, and respect and has maintained those things.

Jin Young Ko hits her tee shot on the sixth hole during a practice round at the 2022 U.S. Women’s Open Presented by ProMedica at Pine Needles Lodge & Golf Club in Southern Pines, N.C. on Wednesday, June 1, 2022. (Darren Carroll/USGA)

“What he has done is manage through some very interesting times good and bad and come out on the other side, always in a solid position and moving the place forward,” Corso said.

“Mid Pines was a very strategic decision. It gave the resort two legs.”

It worked so well that Franz did similar work at Pine Needles in 2017, polishing what was already considered one of the top courses in North Carolina and a favorite among golf course architecture aficionados.

Miller also brought on businessman Tharani in 2017 as a partner. Tharani has been in the golf apparel business for many years.

Almost since his arrival in the area in 1982, Miller had a soft spot for Southern Pines Golf Club, which was owned and operated by the local Elks Club. It sits on what is likely the most rolling acreage in a generally flat county and was a Ross design that had the bones to be special. What it lacked was money, leaving it rough around the edges.

After multiple attempts to buy or lease the club, it finally came together in 2020 just as the pandemic was arriving. Two years later and again with Franz taking the design lead, Southern Pines is another success story.

The course itself, particularly the work done to the greens and around them, sets the layout apart. There is still cosmetic work to be done – more tree removal, cart path improvements, freshening up the clubhouse – but Southern Pines delivers an exceptional golf experience that will get better over time. It’s also within walking distance of downtown Southern Pines, which has a Bedford Falls feel to it.

“It was always a hidden gem and real golf aficionados liked it.

“We’re learning as we go along. The third course is phenomenal to have. People want to play more than one course. I knew that when we started with Pine Needles. I knew we needed more than 18 holes.”

Now comes the happy challenge of creating packages that incorporate all three courses while also catering to the membership. There are upgrades being planned across the board, including hotel rooms, cottages and other areas. The continued momentum within the game — Miller estimates business is up about 30 percent over pre-pandemic numbers and there is little need for discounting — has benefited the Pinehurst area as much as perhaps anywhere.

“Adding Southern Pines, think of the patience that took. He stuck with it and made it happen and he has a great partner in Haresh,” Corso said.

“Kelly is subtle. Not boisterous, not in your face. There is a quiet competence across the board in business and in people skills. I don’t know anyone better.”

Hosting a fourth U.S. Women’s Open in 26 years speaks to the power of the place and, perhaps more importantly, the people who run Pine Needles. It is a comfortable place, a spot you’d rather not leave. It’s a place where golf lives.

“It’s been family owned and we just have one more family involved now. Next year will be 70 years that the Bell family has been involved,” Miller said.

“We don’t have any plans to go anywhere. All of us as we pass through life are caretakers. We’re just trying to leave it better for the next generation.”

Ron Green Jr. is one of North Carolina’s finest sports journalists, having spent more than 30 years covering golf, collegiate and professional sports. He joined the staff of Global Golf Post in 2013.