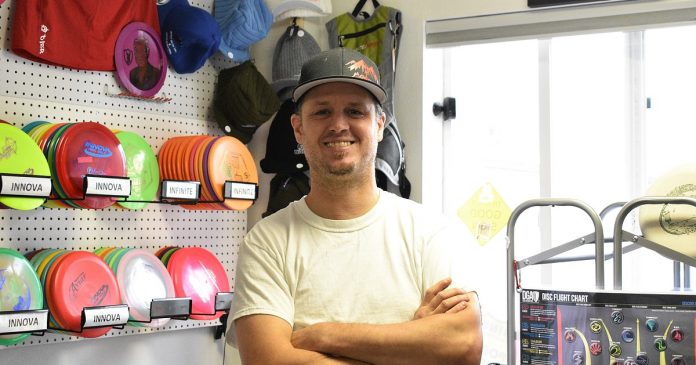 SANDPOINT – At 41, Johnny Eastaugh had already lived quite a life.

His business has grown into a hub for disc golfers in the Sandpoint area to get their gear. Avid disc golfers also stop by to explore all that Eastaugh has to offer.

In addition to the store, Eastaugh owns a couple of disc golf apparel lines – Run It Discgolf and A-Tier Disc Wear. But that’s not all he does.

Eastaugh moved to Sandpoint from Santa Cruz, California, amid the COVID-19 pandemic last May. Last winter, Eastaugh spent months looking for space to open his own disc golf store, and in mid-January he moved into the Panhandle Business Center on the top floor. But just a month and a half later, a room on the center’s ground floor opened and Eastaugh settled in its current location in March.

During the winter months when disc golf was not so active, Eastaugh designed and produced bespoke t-shirts for several local businesses and even filled a special order for a bachelorette party. He is currently working on completing a major contract for The Sand Bar.

Eastaugh has also worked on designing logos and business cards. It’s about connections and he has made quite a few things in his short time here.

“It started with doing it for friends and then they said ‘Johnny can do this’ and the next thing I know is that I do something in Illustrator and Photoshop,” he joked.

His passion for designing a wide range of items was born out of Eastaugh’s love of disc golf.

Eastaugh recalls throwing a disc for the first time in his hometown of Girdwood, Alaska in 1997. They didn’t have baskets back then, so Eastaugh and friends threw discs at objects and markings they’d put up in the park. In 2000, Girdwood became the home of Alaska’s first disc golf course.

Eastaugh received his degree in culinary arts from the University of Alaska Anchorage and a degree in outdoor studies from Alaska Pacific University. He worked as a cook in various places, including on trains and in ski resorts.

“As a chef, you can go anywhere because everyone is eating,” he said.

At some point, however, Eastaugh’s work in a kitchen got too taxing and he made a change. In December 2014 he moved to Santa Cruz to play more disc golf, including the legendary DeLaveaga Disc Golf Course – one of the first disc golf courses in the USA

Eastaugh moved to California in hopes of encountering more disc golf competitions, and he certainly did.

Eventually, Eastaugh found Cabrillo College in Aptos, California and got into graphic design. They had 3D printers and all the tools needed to make bespoke clothing and he loved it. Eastaugh sold their first piece of disc golf apparel in May 2015.

Run It Discgolf was his first venture. He calls it the rebellious side of his clothing line. A-Tier Disc Wear is tournament style disc golf apparel that is affordable for players of all skill levels.

At its Sandpoint store, Eastaugh offers hoodies, t-shirts, jerseys and hats for men, women and children of all sizes. He also has individual discs and disc sets for beginners to advanced players from most major disc golf companies.

“I can completely build anyone interested in disc golf here,” he said.

Eastaugh also sells their clothing online at runitdiscgolf.com. He ships all over the world and has served customers in Sweden, Norway, Finland, Thailand, Germany and many other countries. Its largest US business comes from Michigan, which has become a hotbed for disc golf.

Eastaugh started the website about five years ago when their disc golf apparel launched in Santa Cruz. He said most of his sales are online, but it’s nice to have a store where he can talk to people and get them what they need. It’s also just down the street from Baldfoot Disc Golf Course.

Eastaugh said that there is a huge collectors’ market in disc golf and that he has a couple of historical discs himself that were made around the time the sport was first developed in 1976. He never plans to sell them, but they’re worth a coin.

Eastaugh even worked with Joshua Jones, his friend and owner of disc golf company Above Ground Level, to create his first and only disc – the Ponderosa putter. Eastaugh only did artwork for discs prior to this opportunity, so he said it was really cool to make your own, which are 70% plastic and 30% hemp.

Eastaugh said the putter is now AGL’s best-selling disc. He added that every disc created by AGL is named after a tree and a tree seed comes with every purchase of one of their discs.

In 2019, Eastaugh graduated from Cabrillo College with a degree in business administration and a minor in graphic design. During his school days he worked as a chef in a retirement home and played disc golf whenever he could.

After living in Santa Cruz for about six years, Eastaugh decided to move to Sandpoint in part because the area suits his lifestyle. The city wasn’t new to him either. He has been coming to Sandpoint for ski races since 1988. He also visited a few times to play at the Farragut Open at Farragut State Park, the state’s largest disc golf tournament.

Before moving to California and visiting Cabrillo, Eastaugh said he hadn’t used a computer for nearly a decade. He obviously had a lot to learn, but he quickly figured it out.

He said he used to wear ragged pants and the same five T-shirts almost every day. Now he designs his own clothes and can hardly decide what to wear every day, he joked.

“I never thought that graphic design and clothing would ever be in my future,” he said.

The people Eastaugh met through disc golf make the sport unique, he added.

“I love it,” he said. “The disc golf community, wherever you go, is unique. Everyone accepts and encourages one another so much. “

Eastaugh has played a handful of professional disc golf tournaments over the years. In April he drove from Sandpoint to Santa Cruz and played 77 rounds on 33 courses in two weeks. He said he got blisters on his hands from that trip and couldn’t log into his phone with his fingerprint for a while.

Eastaugh’s current store is pretty small and he admitted that his demand is slowly growing beyond the space. In the back of the building he has a storage room with a lot of inventory. Sometimes late at night, when no one else is in the business center and trying to complete an order, Eastaugh expands his tables into the foyer to add more manufacturing space.

Discgolf continues to grow rapidly, and Eastaugh said he recently ordered three new state-of-the-art machines for making bespoke clothing. He said it will be difficult to fit everything into his current business, so the expansion seems to be in his future.

“At some point I’ll outgrow this little place,” he said.

Eastaugh wants to keep the shop front and have another place to do production. The solo act also wants to add some staff.

Eastaugh likes to think about the expansion and what might become of the business, but tries not to get too far ahead. He wants to take it step by step.

“Sometimes I tend to take too much on myself,” he laughed.

While looking for another location and disc golf being canceled over the winter, Eastaugh is considering buying some ice skates for rent. He said the demand was there.

After moving a lot over the course of his life, Eastaugh has found his new home.

“I’m not going anywhere after that,” he said. 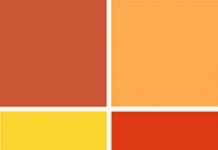 MARK & LONA, President and CEO Tomoaki Matsumura, is interviewed about...