‘Abhorrent’, ‘hideous’: What’s going on at Lake Taupō’s Hole in One Challenge? 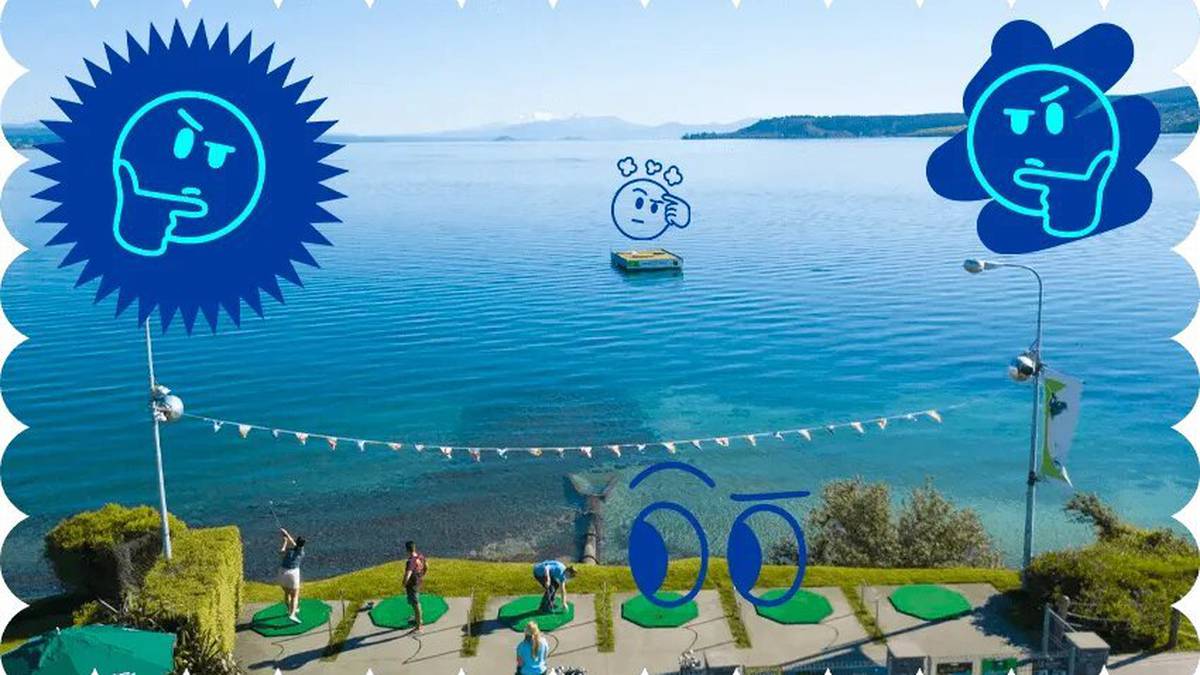 Lake Taupō’s Hole is getting an upgrade many people don’t want. Photo / Tina Tiller, The Spinoff

Originally published by The Spinoff

Expansion plans for the popular Taupō tourist attraction have been abandoned after public outcry. Now, like a wayward tee shot, everything’s up in the air.

It was supposed to be a huge upgrade, one designed to make an already popular tourist destination even more attractive. A cafe would churn out coffee and pastries, a covered ticketing office would keep staff safe from the elements, public viewing spots would offer grand views of Lake Taupō. More people would smack golf balls at a pontoon in the slim hopes of landing a miracle shot and joining the elite group of just eight who have ever claimed the $10,000 prize.

After that, a second stage of upgrades would take things even further, to include an events space, an education and visitor centre, and offer access to the lakefront, where paths and a floating dock would enhance “the amazing waterfront and walkways Taupō has to offer”. The architect’s designs show a structure jutting out from the cliffside, all clean lines, wood panelling, crisp concrete, modern and minimalist.

That’s a million miles from the current incarnation of Lake Taupō’s Hole in One Challenge, where six fake turf tees have been plonked on a clifftop, alongside a fence, an umbrella, a few fluttering flags and an ageing bus covered in branding. As for that pontoon everyone’s aiming for, it’s so old no one even knows its age. The whole set-up has barely changed in the past 30 years.

An artist’s impression of a reimagined Hole in One Challenge. Photo / Supplied, The Spinoff

Now, after a major public backlash, expansive upgrade plans for the tourist attraction are up in the air like a wayward tee shot. Where they land is anyone’s guess.

A man named “Digger” first dug up this dream. It was 1993, and he was enjoying a beer in a local pub when he started sketching some loose plans on the back of a beer coaster. Those plans, for a hole-in-one competition teeing off from a Lake Taupō clifftop and aiming toward a floating turfed pontoon, quickly became one of the region’s most popular attractions, with a legacy almost as integral to Taupo’s tourism appeal as DeBretts hot pools and the Huka falls.

When Taupō mayor David Trewavas wanted to announce the city’s re-opening after recent Covid lockdowns, he did it from a Hole in One tee. “We’re back in action,” he declared before hacking his shot straight into the drink.

These days, Hole in One Challenge is “looking a bit shabby,” admits the site’s business manager Zane Kitchen. On weekends and in summer, the attraction’s most popular times, crowds spill out across the footpath, and queues block pedestrian access. “If four mates are walking down the road, then they’ll all have a crack,” says Kitchen. “They’ll turn it into a challenge between themselves.”

It’s been this way since the mid-90s. Like the thousands before them, everyone who pays $25 for a bucket of 30 balls is taking a punt on winning the challenge’s ultimate $10,000 prize. Land one of your balls on the pontoon 102 metres away and you’ll score another shot. Get it into the blue or white holes and you’ll score vouchers for fishing trips and bungee jump experiences. That happens fairly regularly: already this year around 40 of those have been given away.

But the hole everyone is aiming for is marked by a red flag. Thanks to the downwards slope of the green around that hole, it’s a much harder shot to hit. Kitchen says he hasn’t even come close. “You’ve got to get a direct shot,” he says. “The only way to get it in is on the full, not bouncing or rolling it in. That’s what makes it so hard.”

Only eight people have ever done it. In summer, some 7,000 balls are collected by divers from the water underneath the pontoon every day.

The hole with the red flag is hardest to hit. Photo / Supplied, The Spinoff

The last person to win $10,000 was in August 2020. Kitchen would like it to be won more often, at least once a year. “You do get some customers that are skeptical about whether it’s possible,” he says. “Having a more recent winner helps our cause on that front.”

Despite the degree of difficulty, Hole in One remains extremely popular, attracting locals, tourists and anyone passing through Taupō who wants a quick break and a dopamine hit. “We get good golfers through, and people who have never held a club before,” says Kitchen. Even closed borders and Covid-19 lockdowns couldn’t dent its popularity. “On a nice day, it’s the most scenic golf hole in New Zealand.”

Why has Hole in One stood the test of time? “It’s quite unique,” says Kitchen. “There’s nowhere else in New Zealand where you can go hit a golf ball into a lake, I guess.”

“Hideous” is how one submitter described the plans. “Vandalism” is another. One read: “No. Just no.” When Taupō District Council called for public submissions on Hole in One’s two-stage expansion plans, it caused an outcry rarely seen in the otherwise calm tourist trap that is Taupō.

Almost every single one of the 178 submissions was negative. They said things like, “Don’t block off the beautiful views of our lake!” and, “I find the proposal most abhorrent”. One called it “a black day in the history of Taupō”.

Even business owners were up in arms, despite the extra patronage an improved golfing experience might bring. Increased traffic and pollution was a concern. A nearby motel owner told Stuff it would “annihilate our view”. That sentiment was echoed by many of the public submissions. “No money is worth those views,” one said. “That’s what makes Taupō so special.”

Expansion plans for Lake Taupō’s Hole in One attractions have been scaled back. Photo / Supplied, The Spinoff

Kitchen believes the plans set off fears that it would open the door to multiple lakeside expansions. “There was a little bit of kickback basically around putting a building that close to the lake,” he says. “I think there’s a bit of fear that if one building pops up, where will it end?” Others thought it was too bougie and didn’t stay true to Hole in One’s rustic origins. “There’s a bit of thought out there: ‘What’s wrong with it as it is?'”

The outcry led to a rethink. Now, Taupō Moana Group Holdings, the owners of Hole in One, have been forced to scale their upgrade plans right back. Stage two plans have been scrapped, as have the visitor centre and events space. What’s allowed is minimal: a small kiosk can sell snacks, with one toilet providing amenities. The plans will now go through a resource consent process. Will the upgrades happen before Hole in One’s 30th birthday next year? Only time will tell.

But there is one small piece of good news: a lease has been granted for another 15 years. That’s 15 more summers of budding golfers grabbing a club and having a swing, and, possibly, a few more people being added to the elite eight who have scored a $10,000 hole-in-one. “It’s a pretty fun place to be,” says Kitchen. He only started in December, and loves the job so much he may not return to his old career in accounting. “You never have a bad day down there.”

← Minjee Lee’s Numbers Even More Impressive Than the Friday 63 | LPGA Bryson DeChambeau Explains How Life Can Be Costly on the PGA Tour: 'You Think It's Great, But Once You Start Getting Into the Nitty-Gritty...' →