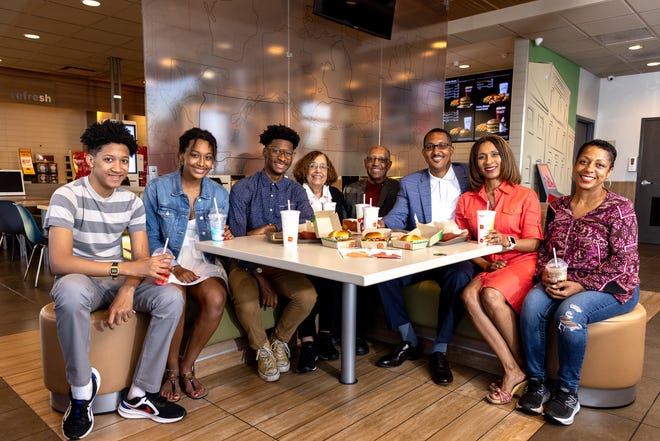 “They have ketchup in their veins.”

That’s what Ross family members say about one another. For three generations, they have worked in or owned and operated a total of seven McDonald’s restaurants, first in Dallas and now in Austin, Round Rock and Hutto.

When they gather for family events, they talk about normal family stuff — who’s doing what at school, for example — but they also talk shop — which dipping sauce is the best one for fries or McNuggets, which new chicken sandwich they like and which frozen drink is their favorite.

They also talk about business, such as how to make the customer service or the employee experience better.

Ann and Edward Winston Ross Jr. decided to buy their first McDonald’s restaurant in 1985 after working for 17 years at Xerox.

“I wanted to start a business that I owned,” says Winston Ross, 77. He also didn’t want to leave Texas, he says.

They were living in the Dallas area and faced knowing that their Xerox jobs were going to be moved to California and then probably back to Rochester, N.Y., where Xerox is headquartered.

Ann Ross, 77, did some research into what type of business would be a good fit. They saw it as a community, as a family, but also an opportunity.

They had a neighbor who was a regional manager for McDonald’s and had been talking to them about working for McDonald’s when they decided to apply for the registered applicants program to become an owner/operator.

They spent the next two years working during the day for Xerox and at night and on weekends in McDonald’s restaurants, learning how to run one.

“The first day, I started out on the frying line,” Winston Ross says. “Let’s see if he goes forward.”

They had to learn everything from how to make a burger and fries to, at the time, how to make biscuits from scratch.

“I could do everything in the restaurant but make scratch biscuits,” Winston Ross says. “They didn’t turn out at all. They just stuck to my hands.”

When they got to the restaurant each day, Winston Ross would work the drive-thru and Ann Ross would head to the kitchen, a place she loves. It’s the most important part of the store, they say, because without the kitchen you have nothing.

“You’re going from one thing to another if you’re in the kitchen,” Winston Ross says. “You’re making a burger one minute, and the next minute, you’re making salads.”

When they bought their first restaurant in south Dallas in 1987, their daughter Erica was 19 and son Edward Winston Ross III, who goes by E.W., was 17.

Both E.W. and Erica were McDonald’s veterans, having had their first jobs at one in high school.

That first store shifted the family business from being engineers and architects to being McDonald’s owners.

The Rosses are descendants of McKissack & McKissack, the oldest minority-owned architecture firm, which was founded in 1905 in Nashville, Tenn., by Ann Ross’ family.

Ann and Winston Ross both became engineers, she an architectural engineer, he an electrical engineer, after graduating from Tennessee State, where they met.

E.W. Ross followed in those footsteps and became a civil engineer after graduating from the University of Texas.

While E.W. Ross was at UT, his parents saw an opportunity in 1989 to buy a McDonald’s on Airport Boulevard in East Austin, an area of town where there weren’t any locations.

“We thought the opportunities were better in Austin than in Dallas,” Winston Ross says.

That McDonald’s is now owned by E.W. Ross, who says it’s important for major chains to be represented in all areas of town. The family began choosing areas that were diverse.

“People in those communities want to be able to walk to their McDonald’s,” E.W. Ross says. “They want to have the same benefits available to them.”

The Rosses have made it a priority to be part of the communities where their restaurants are.

“When you put a McDonald’s in a historically underrepresented part of town, we’re able to partner with elementary schools that need support,” E.W. Ross, 51, says. It’s also meant hosting events such as coffee with a candidate running for city council or school board, or police officers coming to talk about crime prevention, or Capital Metro sharing new bus routes.

At one point, Ann and Winston Ross owned four McDonald’s. E.W. Ross bought two from his parents, including the Airport Boulevard store.

Ann and Winston Ross saw McDonald’s as a “stable environment for the family,” Winston Ross says. “It gives us a legacy. Our kids can just go off and do things for a while and then they come back to McDonald’s.”

That’s what’s happened with both E.W. and Erica.

Erica Ross, 53, says the family element to McDonald’s is what keeps her coming back. “You’re together in the good times and the bad,” she says. After college, Erica returned to McDonald’s and became a general manager in her parents’ restaurants.

No one had any doubt that E.W. Ross would be a future owner/operator, following his parents. His road there was just a little longer.

“He’s always been really driven,” Heather Ross says of her husband, but she says his independent nature meant he had to do his own thing for a while.

E.W. Ross was a resourceful kid who was always creating a new business.He built his own bicycle out of parts. He collected used golf balls on the golf course and sold the balls to golfers for a discount. He had a lawn business in high school that helped him buy his first car, a 1978 MGB convertible.

He also started working at McDonald’s during high school, which, he says, is a great first job: “It teaches you responsibility.”

It’s about showing up on time, with a clean uniform, and being able to make eye contact and talk to people, and working as a team, he says.

While at UT, he owned a bar off Sixth Street with some buddies for a few years. He also worked for UPS.

“He was always trying to figure out how to be an entrepreneur,” says Tony Brown, one of his college friends and the best man at his wedding. Brown remembers Ann and Winston Ross teaching the value of money to E.W. and how to work within his budget, and to make his case if he needed something more.

When they would go to one of the Rosses’ McDonald’s, E.W. Ross and Brown were reminded that it was a business. “It’s not a free place to eat,” he says.

E.W. Ross met Heather at a party, and as he was getting ready to graduate, he sold a motorcycle he owned to buy her an engagement ring. She went on to get her law degree and work as an attorney.

“I was always passionate about creating revenue for myself, where I could be my own boss,” he says.

He kept the day job and got up early in the morning and worked late at night and on days off to build the car business.

In that business, he says, he realized that being your own boss was not a “get rich quick” scheme where you could sleep late or sit around watching TV or playing golf.

E.W. Ross made One Price Cars a full-time job after a few years and owned it for 13 years. “It’s where I cut my teeth and learned what it takes to be an entrepreneur,” he says.

The land near Capital Plaza where the dealership was tripled in value, and around the late 2000s, he realized that he wanted to get into being an owner-operator for McDonald’s like his parents. He sold the dealership property in 2011 and used the proceeds to purchase his first restaurant.

He had to qualify to be an owner-operator and go through the same process as everyone else, not as a person who had parents who owned restaurants. His parents did not give him a restaurant, but he trained in their restaurants while in the training program.

“I didn’t even get a first car given to me,” E.W. Ross says. “I certainly wasn’t going to get a franchise given to me.”

E.W. now has five McDonald’s restaurants. Three years ago, as their three children’s schedules became more complicated, Heather left her job as an attorney and slowly got pulled into helping out at their restaurants.

Both E.W. and his father are a “gets stuff done” kind of person, she says. She and Winston’s mother come behind them and smooth all the ruffled feathers.

“He is just a leader,” Erica Ross says of her brother. “He’s just so organized. He can do so many things.”

All three of E.W. and Heather Ross’ children have worked officially or unofficially for McDonald’s.

Son Edward Winston Ross IV, 19, who is also called Winston or Little Winston, is going into his sophomore year at Baylor University, where he’s studying theatrical design technology. He’s been working at McDonald’s since he was in high school and received a scholarship from McDonald’s to go to college.

Daughter Ryan Elizabeth, 18, has worked at a couple of McDonald’s locations. She will head to Savannah College of Art and Design in Georgia in the fall and is a model.

Youngest son Roman, 15, has put on a Hamburglar costume and worked events at his father’s stores, just as E.W. used to put on a Batman costume and make appearances at his parents’ stores while he was in college.

Roman, who will be a sophomore at Hendrickson High School, knows that soon he will be working regularly at one of his father’s stores. It will be his choice, he says, but “I need money.”

The Rosses have a deal that the kids need to put in the bulk of the money for their cars, just as E.W. had to buy his own car and later his own McDonald’s stores.

Being the boss’s son or daughter doesn’t give you any breaks, Ryan Elizabeth and Little Winston say. Everyone else can leave their job at the job when they go home, but the Rosses get to analyze the day and what they could have done differently with their dad. It’s on-the-job as well as at-home training for a life of customer service, management and entrepreneurship.

Both older generations believe Little Winston will be the next owner-operator. He might go off for a while and do Broadway, but “he’s got ketchup in his blood,” Ann Ross says.

Heather Ross remembers when Little Winston was 5, coming into one of his grandfather’s stores and giving the employees orders. “Winston, you cannot tell them what to do,” she remembers telling him.

They took a trip to the children’s museum in Dallas, where there was a pretend store. Before Heather Ross knew it, Little Winston had organized the kids into who would work the register and who would stock, and they did what he told them to do, she says.

Now, as a manager at their stores, “He’s a real asset,” she says.

This new generation has grown up in the grandparents’ and parents’ restaurants.

“You would think you would get tired of it,” Ryan Elizabeth says, “but it’s just food.”

Little Winston says he grew up thinking McDonald’s was only about cheeseburgers. “When I was older, in high school, I realized there was the rest of the menu,” he says.

They all agree, there’s something about those fries.

Nicole Villalpando writes about Central Texas families for the American-Statesman. She can be reached at nvillalpando@statesman.com. 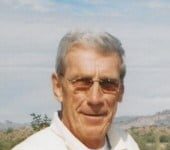 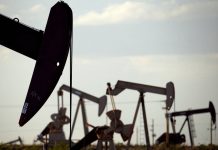 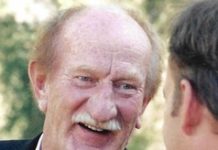 7 Ways To Play More Golf As A New Dad