Fire at Mt. Angel in Oregon on October 9th destroyed and damaged buildings 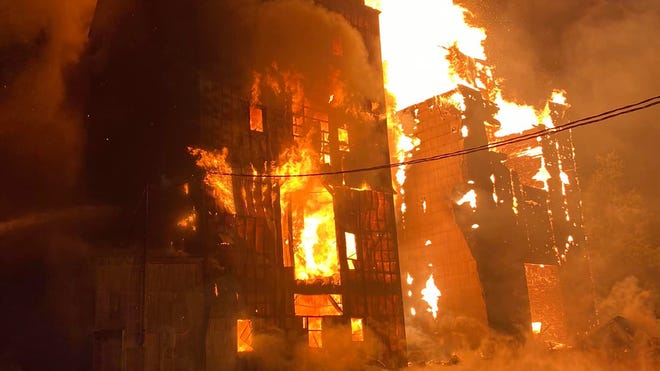 The Mt. Angel Fire District was dispatched after officers from the Mt. Angel Police Department requested the discovery of a burning building on the 200 block of South Main St. at about 12:48 p.m.

The original fire was in a large granary, Daniel said. When the first engine hit this building was completely flooded and additional mutual help was requested as the fire continued to worsen.

Flames spread to a nearby building and the fire got so intense that radiant heat ignited one building in the north and another in the south, said Jim Trierweiler, Mt. Angel fire chief, who is also the captain of the Salem fire department.

“Embers the size of golf balls” flew up to four blocks from the flame, so firefighters climbed rooftops and patrolled Meters to make sure nothing catches fire, Trierweiler said.

“I’m in shock and have no words,” said a post from Blackbird Granary Antiques on Facebook. “I am heartbroken and pray that all firefighters are safe.”

A Mt. Angel volunteer firefighter stepped on two nails. No other injuries were reported.

About 35 fire devices were used in the reaction and 120 firefighters worked all morning to fight the flames with more than 1 million gallons of water.

“Public works came in and we’re pumping as much as we can to refill the reservoir,” near Mt. Angel Abby, Trierweiler said. Crews from Silverton also drove with additional water.

Crews were working more than 13 hours later to extinguish existing hotspots and haul heavy wood and metal parts with heavy equipment from collapsed buildings to extinguish the remaining flames.

The cause of the fire is unknown and is being investigated by a Marion-Polk district team.

Dianne Lugo is a reporter for the Statesman Journal for Justice and Social Justice. You can reach her at [email protected], 503-936-4811 or on Twitter @DianneLugo.