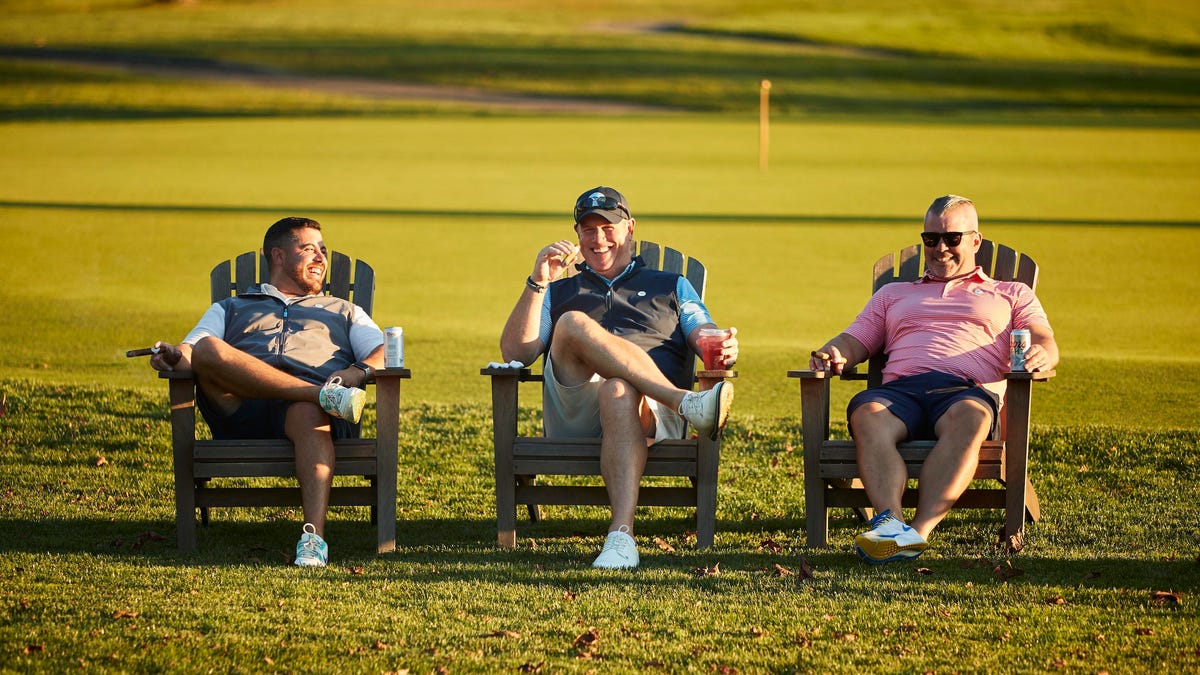 A breakfast ball after an errant tee shot on the first hole at Silver Spring Country Club took a hard left turn into the woods sparked the creation of Player 2. The idea for the Connecticut based clothing label’s logo and slogan then took root as the refrain ‘drop another’ was repeated often during the round.

The grouping consisted of three decent golfers who are much better businessmen and brand builders: AJ Romeo runs the sports marketing firm Barnburner; Bill McGarry is an SVP of advertising, sales and strategic partnerships at AccuWeather; and David Petrie co-founded Blue Buffalo, a pet food company that was acquired by General Mills

GIS
four years ago for $8 billion.

“We’re out there to have a good time, be with friends and buddies and have a nice stroll on a course on a Friday afternoon with a cocktail or two and it just came to life out there on the course,” Petrie explains.

“It resonated. Anybody that’s played golf before knows that if you’re at Pebble Beach or Pinehurst, you get to that first tee box and you’re nervous. If you shank it, you hope that one of your buddies in your group tells you to drop another,” he adds.

The idea of taking a mulligan following a chunked shot, hosel rocket or unexpected visit from the shank-a-potomus is highly relatable territory for recreational duffers. It’s also not a name that begs any explanation from its intended audience, especially when paired with the upstart label’s cheeky logo, a gloved hand about to drop a golf ball.

“Some people call it Player B. Some people call it second team All-American. Down south they call it ‘a Bubba.’ But Player 2 always comes through. It’s all about trying to have Player 2 hit that shot for you all the time and the only way you’re going to do that is out with your buddies having fun, where you can drop another and take that breakfast ball,” Romeo says.

The trio behind Player 2 have the utmost respect for the rules governing the game and would never play as fast and loose in a tournament setting. But they believe there’s nothing wrong with taking the occasional mulligan amongst friends, a sentiment shared by legions of weekend golfers.

Other than espousing a playful vibe—they dub the cooling technology in their shirts ‘Brrº Triple Chill Effect’—what separates Player 2 from the dozens of up-and-coming golf clothing labels pumping out striped, sweat wicking polos along with hoodies and graphic tees?

“A lot of these brands are coming out with what I would call extra-designed shirts you may only wear once. You’re going on a boys’ trip and you’re going to wear it for that one trip. We want to be the brand that is part of your regular rotation. You are wearing a Player 2 shirt once a week on a golf course and it feels great,” Romeo explains.

Player 2 layers a navy vest over top of their performance polo.

Player 2 invested in a 20 X 20 island booth at the 2022 PGA Merchandise Show to show off the breadth of their debut line to golf club reps and generate initial business. Thanks largely to connections made at the annual industry tradeshow, the brand will be stocked in 20-25 pro shops by July. Current accounts include Richter Park, Essex Fells, Mountain Ridge, and Knickerbocker Country Club.

Player 2’s objective is to find their way into 600-800 clubs by year end 2026. With over 4,000 private and public green grass shops domestically, they consider their target to be on the conservative side. Establishing a presence at member-guest tournaments, charity outings and also setting up activations during primetime hours on busy courses is the lynchpin of their growth strategy.

“We want to incorporate a mobile marketing strategy for us to get out there to talk to golfers and be in front of them. We don’t have a huge advertising budget like some of the well-established brands out there so us being able to interact with golfers face-to-face onsite is going to be a big push for us going forward,” Petrie says.

While Player 2 attracted interest from a large national retailer following the PGA Show, the timing just wasn’t right yet.

“We want to make sure we take care of our green grass accounts first, start small, spread and go wide and then eventually we can get into those big box stores. It’s something we want to do but we don’t want to cannibalize the market yet,” Romeo explains.

The company’s goals are lofty but well within the realm of possibility, aiming to take 3% market share in the golf apparel space within the next five years.

“It’s a huge industry that we feel is going to keep growing and expanding. If Player 2 can just carve out a small little segment within the golf industry, it would be a homerun for us. We’re young and just getting out of the gate and we’ll see where it takes us but we will certainly have fun and enjoy it along the way,” Petrie says.