How Jordan Spieth perfected the art, and importance, of the autograph 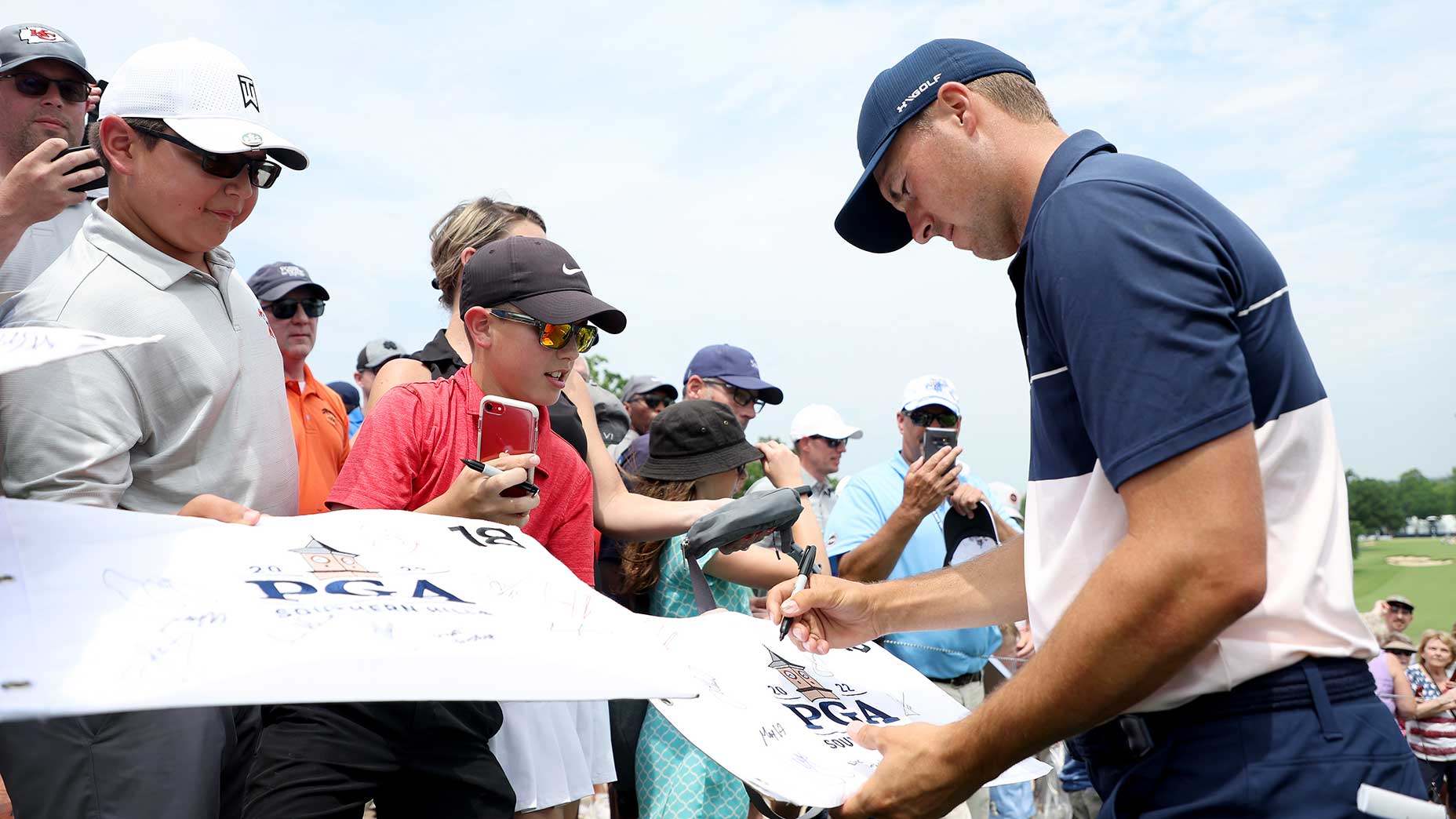 Jordan Spieth signs autographs for fans on Tuesday at the PGA Championship.

Have you ever listened to Jordan Spieth talk about signing autographs? He speaks of it with as much thoughtfulness as he does when he discusses Bermuda greens or chasing the career grand slam.

That was again the case on Wednesday, as Spieth prepares for yet another PGA Championship. He’s been around long enough and always gives thorough answers during press conferences, but on this particular Wednesday in Tulsa, Okla., Spieth was extra chatty.

The transcript reads more like a novel. He talked at length about momentum, how to decipher Bermudagrass, a missed cut at the Masters, the supergroup tee time with Rory McIlory and Tiger Woods, and he even dished on the Dallas Mavericks’ playoff chances.

But also about signing autographs. Let’s get back to the autographs. He was asked about what it means to him to sign for kids.

“That was me,” Spieth said. “I remember going with my dad to the Byron Nelson, and that’s all I wanted to do was get my ticket signed by as many guys as I could. I’d wait out, just to have that personal interaction. That’s what’s pretty unique in our sport, right, is that up-close, personal interaction, even tournament days or these practice round days. It’s really cool.

“Like last week, I gave a ball to a kid walking off maybe on Saturday, and he just lit up and turned around and was screaming. For me I was just kind of walking by like, here’s a ball, and then when I kind of thought about it, I was like, man, that made this kid’s day. That’s really cool. It would have been the same for me back then.”

Spieth’s answer here was particularly interesting, and noteworthy, given what happened last month. (We learn at a young age that actions speak louder than words.)

After he missed the cut at the Masters, Spieth traveled to Hilton Head Island for the RBC Heritage. After firing a final-round 66 on Sunday, Spieth held the clubhouse lead at 13 under with 10 players left out on the course. As he was walking off the 18th green to go sign his card, a hoard of young fans were waiting for him.

Spieth, channeling the tone and cadence of a first-grade teacher, explained the situation. This was caught by the telecast and shared on the PGA Tour’s social channels.

“Hey guys,” he said. “So, I’ve got to wait to see if there’s maybe a playoff or not, so I’m going to lay inside and lay low for a little bit, and then I promise I’ll be back here. Just it’s either going to be after a playoff, or if there’s not, if someone else wins, okay? I’ll come back.”

As you might remember, Patrick Cantlay shot 68 from the penultimate pairing to tie the lead, but Spieth parred the first playoff hole to win the tournament.

Over an hour later, Spieth came back to that same group of fans, this time wearing the winner’s tartan plaid jacket. The kids were chanting his name. He started signing.

“It’s hard sometimes to get everybody, and I don’t,” Spieth said on Wednesday. “But I think people appreciate if you’re passing them, and you just at least say, ‘Hey, look, I need to get my work done and I’m going to be here afterwards and I’ll sign some there. They seem to appreciate that more than just kind of walking by. Try to do that the best I can. Certainly for every two you get, you miss one, and that’s just kind of how it works. But if you try to get everybody every day, it can really wear on you out here.”

Spieth even has morals when it comes to signing. At the 2016 U.S. Open, he criticized adults who try to squeeze kids out of the way to get their own autographs, most of which, Spieth said, will end up on eBay anyway. So no, signing for adults is not on the top of his priority list.

For the record, Spieth isn’t the only player on Tour who signs autographs, but he’s long been one of the fan favorites and by all accounts seems to sign as many as anyone. That’s the other thing, his signature. Have you ever seen it? Sports legends like Harmon Killebrew and Arnold Palmer stressed and coached younger players on the importance of a legible signature. Spieth’s is by no means perfect — although it’s a lot more difficult writing on a small, circular golf ball with dimples — but a quick Google search will show you he’s consistent and better than most athletes. His cursive J and S are easily distinguishable, and for the most part his John Hancocks pass the readability test.

Now, it’s usually not necessary to run quotes in their entirety, unless it robs the story of context. But most often it’s because quotes are redundant, and it’s foolish to say every single word adds something impactful.

But we’ll break the rules here. We’ll throw Spieth’s final thoughts on signing autographs in below.

“Work is first, but we’re out here because there’s fans of golf, so we’re entertainers to an extent, too,” he said. “So I think for the most part, pretty much everybody is really good about finding those that are supporting them and giving them a little bit of time.”

It goes a long way.

Josh Berhow is the managing editor at GOLF.com. The Minnesota native graduated with a journalism degree from Minnesota State University in Mankato. You can reach him at [email protected]