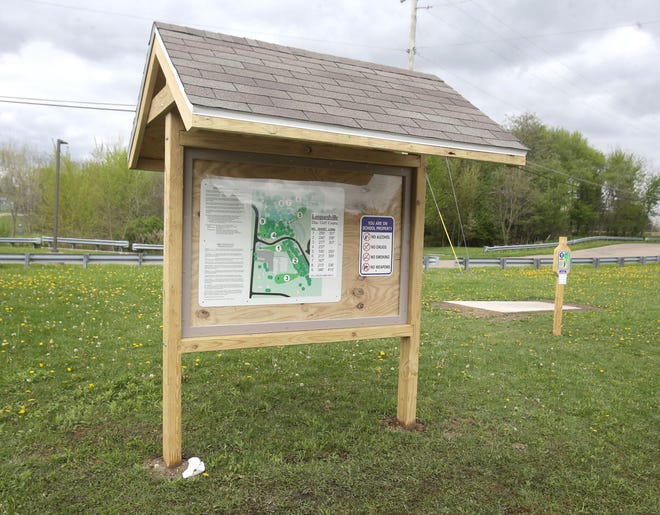 LOUISVILLE – The local public school system has dedicated some of its campus grounds for a new disc golf course.

The nine-hole Leopardville Disc Golf Course is on the Louisville City Schools’ recreational and athletic campus in the 1300 block of S. Chapel Street.

“I think it is 7.5 acres,” said Rick Crislip, vice president of the Louisville City Board of Education. “This has been a long-going process. We have plans for that land. It is going to be a beautiful property. We have plans in the future that we can make an athletic complex there. It takes money. It is not going to come from the taxpayers.”

To pay for this disc golf course, the school system used funds from a $14,800 grant from the GPD Group Employees’ Foundation of Akron.

The new course is adjacent to Louisville Middle School, which is at 1300 S. Chapel St. Louisville High School is nearby at 1201 S. Nickel Plate Ave.

Leopardville Disc is open to public

While the facility is on school system-owned land, the disc golf course is open to the general public.

In disc golf, instead of hitting a golf ball, participants walk the course tossing a flying disc toward the hole, a cone-shaped galvanized steel basket mounted on a pole.

“They didn’t get everything they wanted,” said William “Bill” Griffith, the architect with SoL Harris/Day Architecture who designed the course. “They didn’t get enough to put in a second set of tees. In disc golf we like to have two sets of tees on each hole. It was completed about a month ago.”

The first hole is adjacent to a kiosk that provides a map of the course. Structures along the course were constructed by Louisville High School home maintenance class students. High school engineering students designed some of the course features.

“Every year it is growing exponentially,” said Louisville High Principal Garry Tausch. “I was shocked how fast disc golf is growing. When I drive by the holes, I see people there all the time, almost on a consistent basis. It is one more thing to add to our campus.”

The campus already includes a hiking trail, diamonds for softball or baseball, and track-and-field practice facilities. The disc golf course meanders through the more rustic portion of the campus.

“They have got all kinds of stuff going on there,” Griffith said. “We kind of worked around that stuff.”

This is the second nine-hole disc golf course in Louisville. The other is in the city’s Wildwood Park in the 500 block of Stertzbach Avenue.

“A nine hole course probably won’t have too many tournaments,” Griffith said. “They might have a kids’ tournament… This is a community course for younger players that can’t throw as far. In Stark County, there are only two that have 18 holes.”