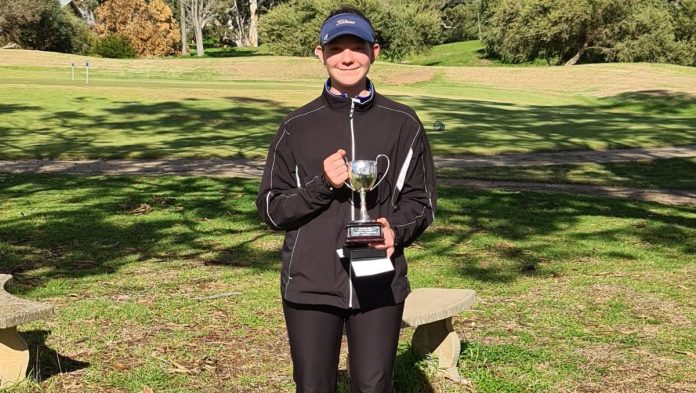 She is a 14 year old Murraylands golfer with a wonderful swing and her stroke made her a champion.

Murraylands, Jaime Hards experienced a variety of emotions throughout the competition but emerged victorious on the final day.

Jamie’s passion for sport began at a young age.

“I picked up a golf club for the first time when I was six,” she said.

“But I didn’t start playing competitive golf until I was 11. The passion for the sport started because my father played.

“He’s left-handed and I wanted to try so he got me a right-handed one and I really enjoyed playing, got lessons at Kooyonga Golf Club and went from there.”

Father Will Hards supported Jamie and is just delighted to see that she enjoys the sport.

“More than anything, she wanted to come out and hit a few golf balls,” said Mr. Hards.

“I played cricket and had a golf set just for fun. I didn’t play a lot or was part of a club at the time, we just went to the driving range and we continued from there.

“If she started hitting a few golf balls, I thought she could get a workout too. From then on, she really shines at the sport and her natural skills have now prevailed.”

“He’s influenced my game and helped me with my swing,” said Jamie.

“He really helped me with my backswing and his training really improved it. He showed me how to do a lot of different strokes and get my swing right with them.”

Jamie is a member of the Murray Bridge Golf Club and the Kooyonga Golf Club. She loves to play bridge in Murray.

“My favorite hole is 17. It’s a great place to play and a great club to represent.”

Jamie started competing in tournaments when he was 11. Now, at the age of 14, she is already taking titles home with her.

“I was really excited as I wasn’t really expecting to win the SA Country Junior Championship,” said Jamie.

“On the first day I was six strokes behind the leader. On the second day I came out relaxed and just played my game to the best of my ability.

“The last few holes I knew I was in a groove and didn’t want to ruin my swing.

“I had a bad shot on the 17th hole and had to recover from it. I had to forget that because I knew I couldn’t change it.

“If you keep thinking about bad shots, it can tire you mentally and drag you down, so I just focused on my next shot.

“The last hole was pretty intense, but I was really happy to win.”

The Murraylands Junior Team also competed together. Members of the squad also competed in the individual competition, in which Armani Marsters of Murray Bridge Golf Club came second and Asia Marsters came ninth.

“The second part of the competition was a team matter,” said Will.

“They really were a team for the Murraylands region. Jamie’s friends were very important to her.”

“We really supported each other,” said Jamie.

“Armani and Asia invited me to play and I really want to thank them, along with Alanah and Murray Bridge Golf Club for inviting, signing up and helping.”

Not only does Jamie have a strong game, but also has a bright head on her shoulders and has some plans before she even delves into the going pro plan.

“But I want to finish school first. Then, hopefully, I can go out and go on tour.”

Subscribe to the FREE Murray Valley Standard Newsletter delivered to your inbox every Monday at 12:30 PM.

What you can learn from this 16 year old golfer who...