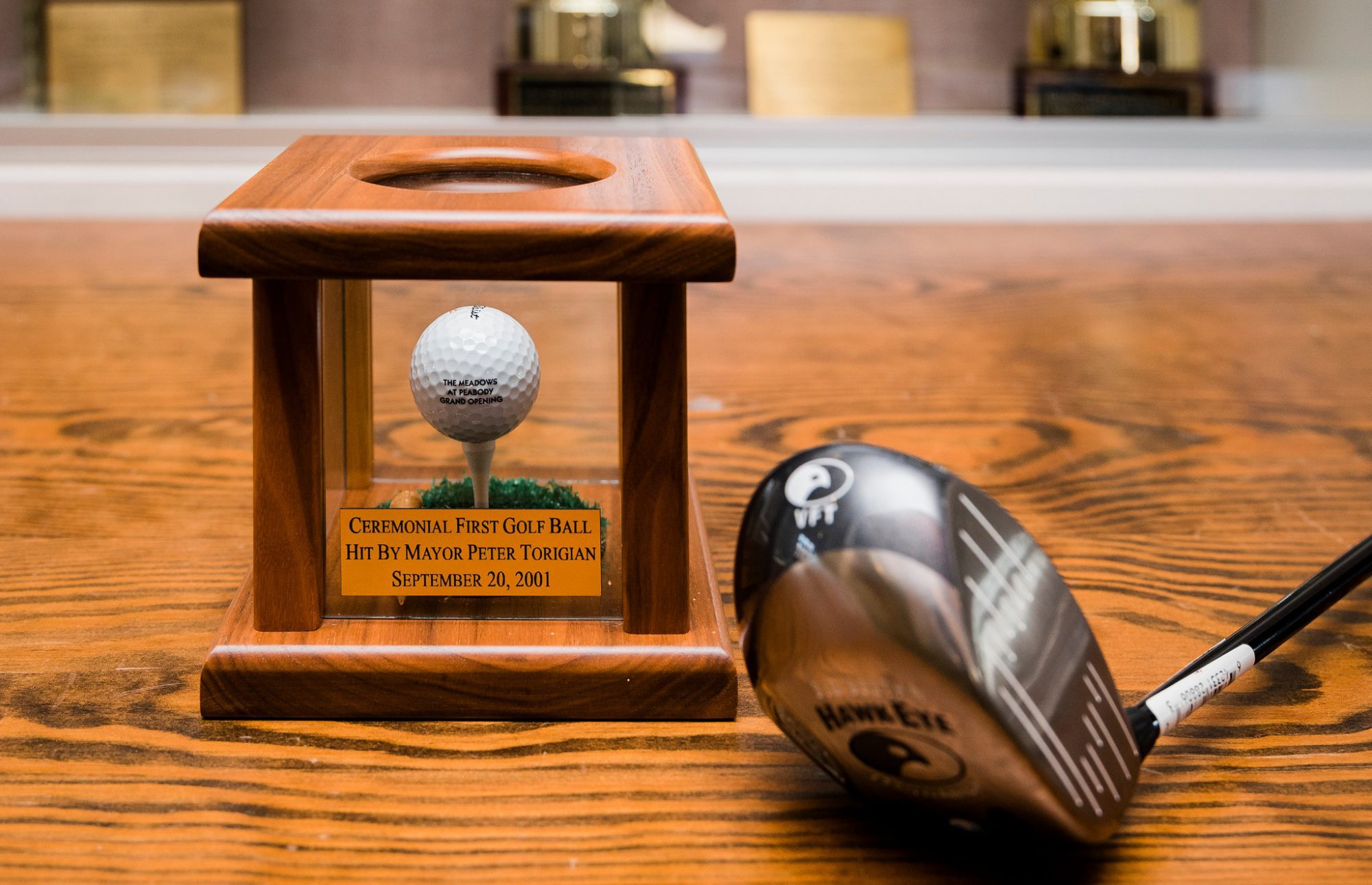 The ceremonial first golf ball hit by then-Mayor Peter Torigian and his club from the opening day of The Meadow at Peabody Golf Course. (Spenser Hasak)

You have 4 free articles left this month.

PEABODY — The City of Peabody will celebrate the platinum anniversary of The Meadow at Peabody Golf Course in style with a 20th-Anniversary Golf Tournament Monday.

Golf professional Peter Cronan said the goal of the tournament is to give back to the community that helped build and support the course during its first two decades. The club opened initially as a 9-hole course on Sept. 20, 2001. The full 18-hole course opened for use on May 18, 2002.

Peabody Mayor Edward A. Bettencourt Jr. said, “The Meadow at Peabody consistently ranks among the best municipal golf courses in the region. We are forever grateful for Mayor (Peter) Torigian’s vision in developing what would become such a beautiful and popular destination for local golfers.”

Cronan remembers the September day when Torigian launched a ceremonial first drive that split the fairway, to the delight of the crowd. He said he still has the original ball and club the mayor used. They are displayed in a trophy case in the foyer of the clubhouse.

“I don’t know if he had ever played golf before but he was an athlete, so I wouldn’t be surprised if it was one of the first, if not the first, balls he ever hit,” Cronan said. “Maybe he went to the range to prepare; that wouldn’t surprise me either.”

Seattle resident Kevin Harris, while on a business trip in Peabody, got a full round in on opening day. He said he simply Googled “courses near me” and The Meadow popped up at the top of the list.

“I’m always prepared to play on any day,” he said. “I made sure to call first and make sure they had a rental set, so that’s all I needed to hear.”

Bettencourt said he will be hitting a ceremonial first drive to open the afternoon shotgun, adding that he may have to follow Torigian’s lead and rehearse a little.

“I hope to play with my dad, but I’m going to have to start practicing to make sure I don’t embarrass myself on that first drive,” he said.

Proceeds from the event will benefit the No Child Goes Hungry in Peabody and Citizens Inn charities.

The cost is $100 per player ($400 for foursome), which includes green fees, a golf cart, complimentary gift bags, and a boxed lunch.

There will be prizes for the top team, longest drive, straightest drive, closest to the pin, as well as a hole-in-one prize.

To register or view sponsorship opportunities, go to www.peabodyrecreation.com. You can also download the form and mail or drop it off at Peabody Rec headquarters, 50 Farm Ave., Peabody, 01960.

Anne Marie Tobin can be reached at [email protected]