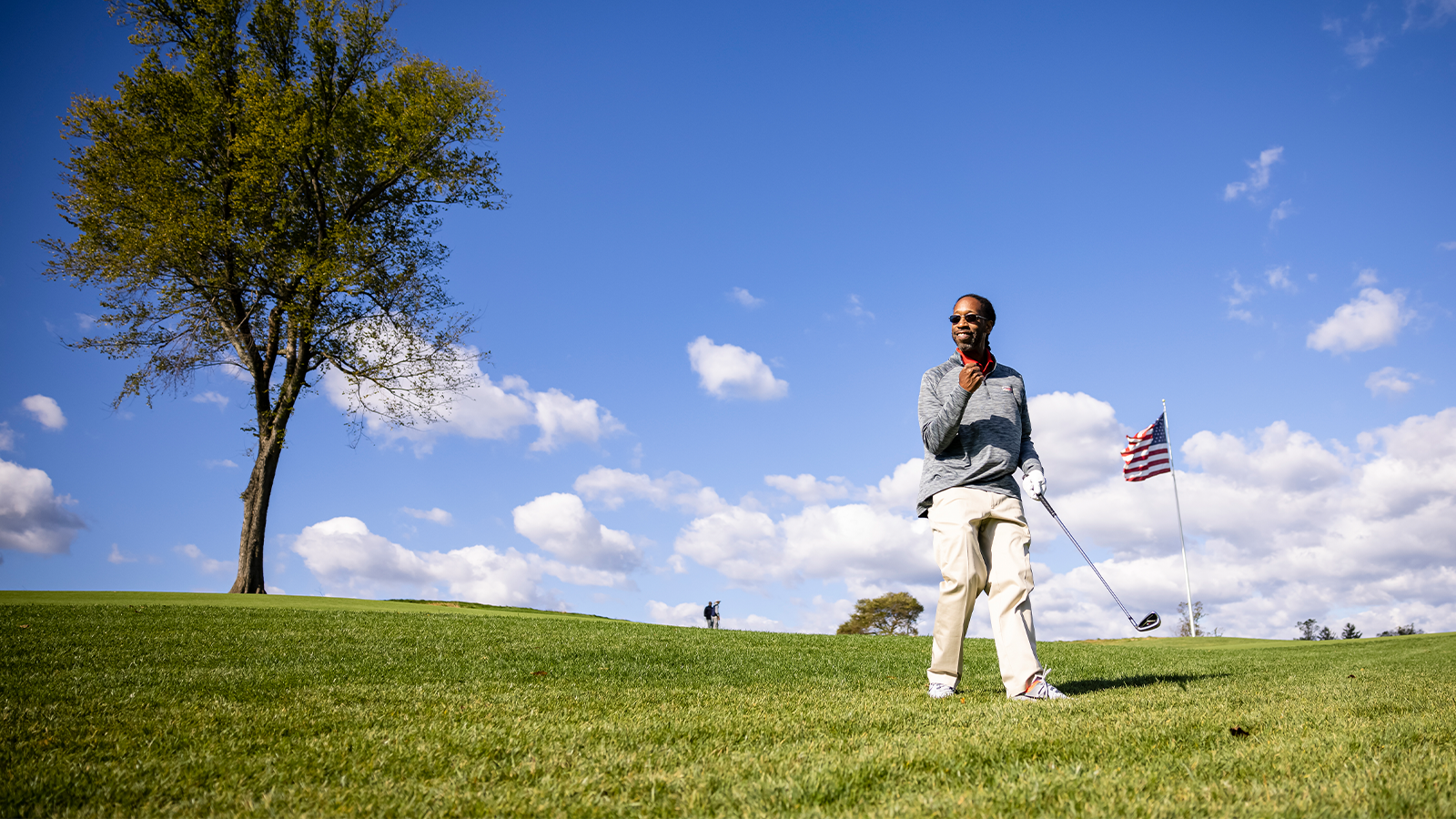 In 1987, following the footsteps of his grandfather and uncle, Ralph joined the United States Army in search for the next step in his life.

After a brief time in the Army, Ralph transferred to the Marine Corps Reserves because he thought it might fit better with his career path. In 1991, he had fulfilled his commitment to his country, and he separated from the Armed Forces. With little structure in life, Ralph’s brain started to worry. He worried about the past, the present and the future. For the next two decades, Ralph struggled with his mental health.

The highs were infrequent, and the lows never seemed to end. Until Ralph was diagnosed a couple years ago with PTSD, he was truly lost. There was a huge void in his world. He lacked community and purpose. All that heartache changed  one afternoon at the New Haven Vet Center in Orange, Connecticut.

“Golf is an unathletic sport.” That was Ralph Mayo Jr.’s opinion of the game until last year. Having never tried golf, he didn’t see why it would even be considered a real sport. The professionals weren’t real athletes. Regular players used carts to ride around. The ball doesn’t move. How hard could it actually be?

The same man who never respected golf was changed. U.S. Army Veteran, Ralph Mayo Jr. is known by everyone as the “Golf Guy.”

A staff member at the New Haven Vet Center approached Ralph about playing golf. As Ralph recalls, “They asked if I wanted to play golf and I said no. They reworded the question and asked if I was interested in learning the game. That time I said yes.” At that point in Ralph’s life, he felt like he had nothing left to lose, so why not try.

Ralph attended the six-week session of PGA HOPE in 2021. From the start he was comfortable because the PGA HOPE Instructors grouped Veterans based on their golf experience. Ralph was a beginner, so to be with other entry level Veteran golfers was important to him. That small detail is one of the millions of ways PGA Members provide Veterans with a comfortable, welcoming environment to ease any anxiety they may have about participating in the program.

By week two, Ralph was loving the experience. He really liked driving the golf ball. For him, it was a form of stress relief for someone who is self-described as a “worrier.” Smacking the golf ball with his driver was a great feeling. It was his only opportunity to think about something other than his anxious thoughts. By weeks three, four and five, Ralph had really connected with the PGA Members leading his session.

They asked if I wanted to play golf and I said no. They reworded the question and asked if I was interested in learning the game. That time I said yes.

One instructor of note was John Nowobilski, PGA: a Life Member and a volunteer PGA Professional who helped Ralph learn the game. Even to this day, Ralph keeps in touch with John. Last fall when Ralph was nominated by the Connecticut Section to PGA HOPE National Golf & Wellness Week at Congressional Country Club, it was John who helped Ralph prepare.

When asked about graduation day in PGA HOPE, Ralph was sad because he didn’t want his golf experience to end. In that brief time being introduced to golf, Ralph grew and wanted to continue that path. He formed a connection to something he hadn’t experienced in life for decades. He knew there must be something after that he could do.

Dennis Dungee, PGA leads PGA HOPE for the Connecticut Section, and he watched Ralph’s evolution and commitment to the program. After the six-week session was over, Ralph couldn’t stop talking about his experience. Most of all he couldn’t stop hitting golf balls. Ralph put on his recruiter hat and started sending Dennis more Veterans who needed PGA HOPE. He instantly became an advocate for the game he brushed aside in his youth. After watching Ralph’s commitment to PGA HOPE, Dennis decided to nominate Ralph to serve as a PGA HOPE Ambassador. When you ask Ralph about being a PGA HOPE Ambassador, you can feel him smiling through the phone. 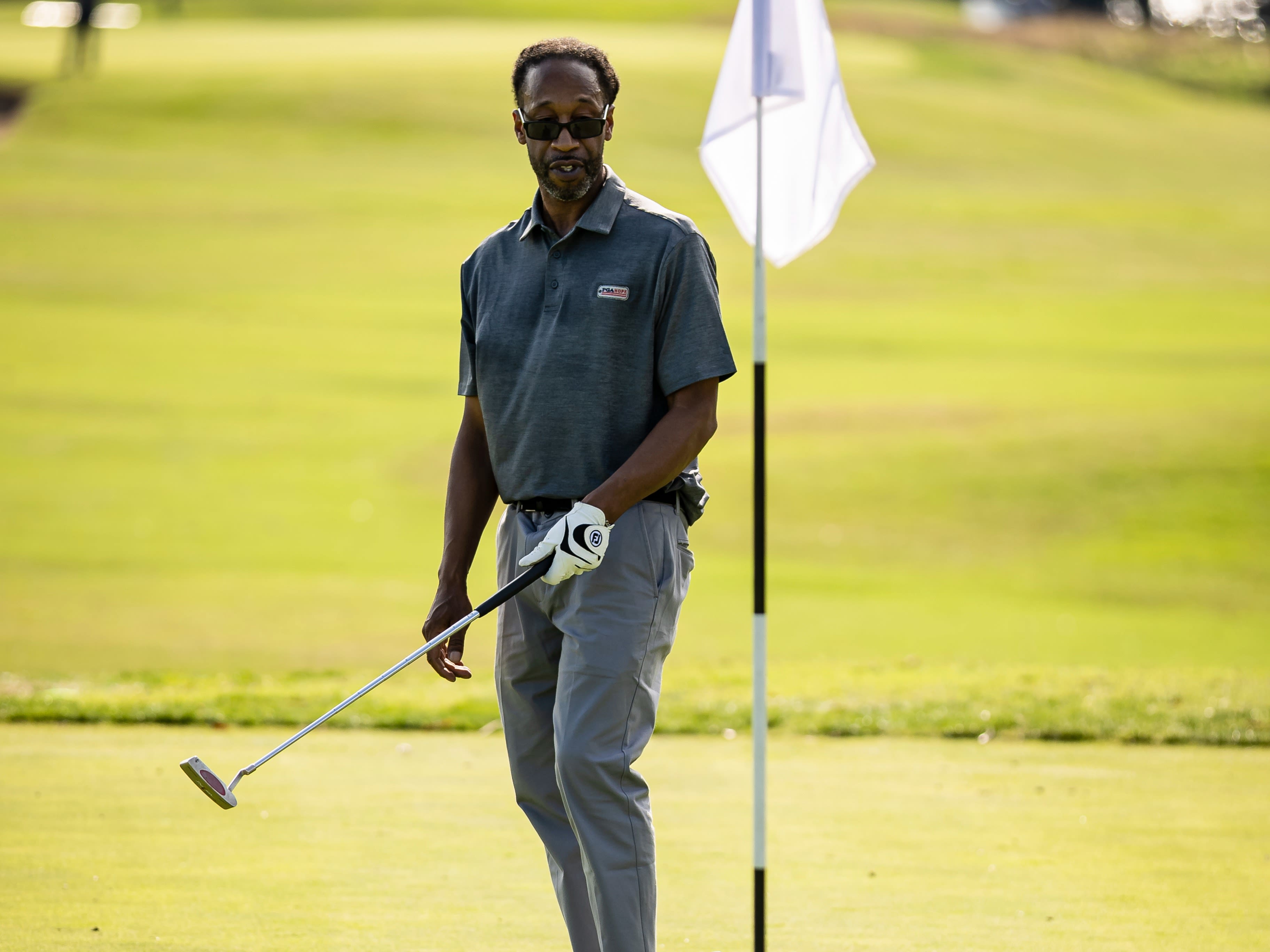 Ralph Mayo Jr. never played golf growing up: but today, you would think the game was written deeply in his DNA.

No longer was golf unathletic or boring. Golf was now a part of Ralph’s entire existence. He’s proud to tell you he watches the Golf Channel at home. In the last year, he has helped recruit twenty new Veterans to Connecticut PGA HOPE programs. Every day Ralph thinks about golf. His obsession with his own life has transferred to something much more positive.

Ralph believes if he had connected with golf years ago his life would have been totally different. The extreme lows he experienced would not have happened. That’s why he constantly talks about golf to anyone who will listen. Respect for the game has given him respect for himself. Most importantly: Ralph has a couple golf buddies he plays with every week. Ralph Mayo Jr. instantly became an advocate for the game he brushed aside in his youth and is now a PGA HOPE Ambassador.

He knows he never would have met these men if not for the game. Being alone created some very dark times for Ralph, but having this kind of companionship through golf is a gift of PGA HOPE.

The same man who never respected golf was changed. Ralph Mayo Jr. is known by everyone as the “Golf Guy.” Everywhere he goes people know he’s going to talk about golf. When asked to describe golf in one word, he selected AMAZING. To know where the game has taken his life in such a short time truly is amazing.

If you or someone you know about would benefit from PGA HOPE, visit www.pgahope.com for more information.