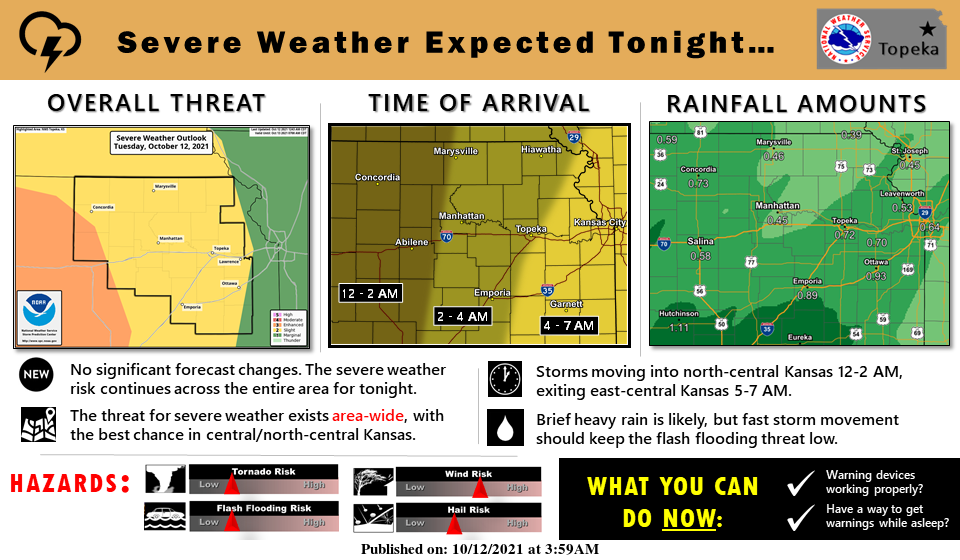 Graphic from the National Weather Service.

After 2 to nearly 7.5 inches of rain in and around Lyon County from late Sunday to early Monday, there is another chance of heavy rain on early Wednesday – along with the risk of severe weather.

TV-13 meteorologist Doug Meyers says intense thunderstorms should lessen as they move west to east across the KVOE listening area early Wednesday, but he also says flooding could be a problem – even with totals much lower than that we already had this week.

Parts of Chase County were raised about two inches from Sunday night to Monday. Emporia total numbers, including KVOE studios, were generally around three inches. East of Emporia, totals were generally between four and six inches, but there was a 7.3-inch report three miles east of the Emporia Municipal Airport. Notably, the Lyon County Emergency Communications Center’s traffic alert map shows no cases of road closures due to flooding, despite the heavy rain.

There is currently a low risk of storms in the entire area between midnight and sunrise. Meyers says gusty winds will be the main risk. Hail could be as big as golf balls, but it could be isolated. There is also the possibility of a tornado, but that is minimal overnight.

Stay with KVOE, KVOE.com and KVOE social media for updates when we get severe weather. Also download the free KVOE mobile app for our severe weather reporting, wherever you may be.