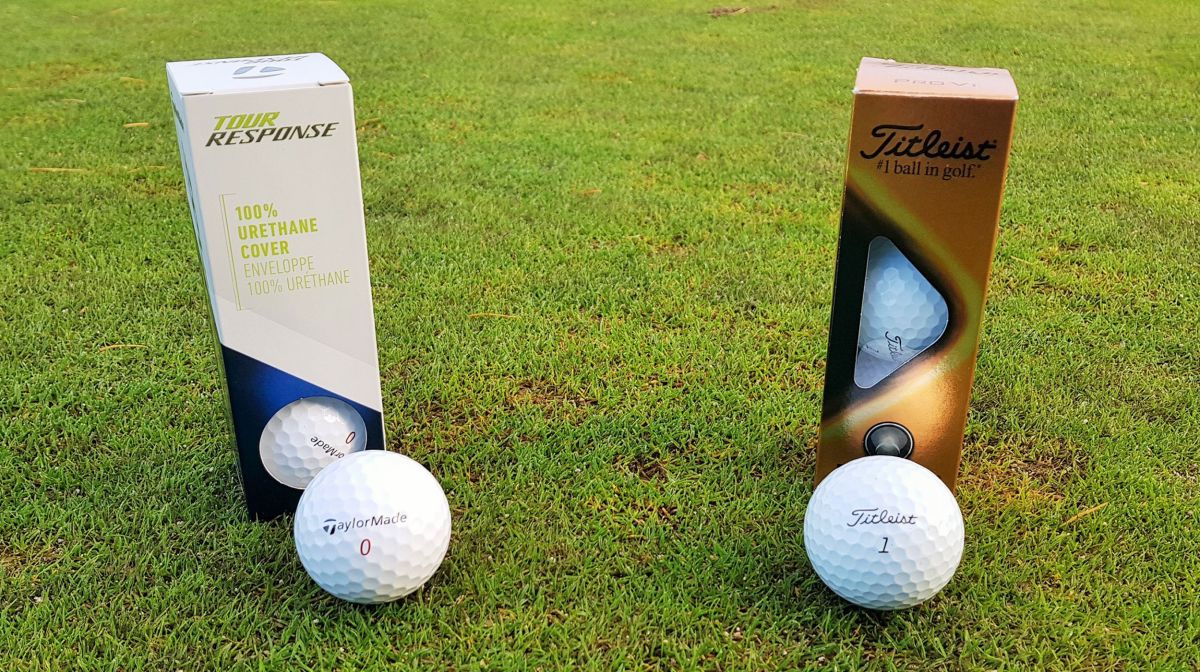 In this TaylorMade Tour Response golf ball review, we compare it to the Titleist Pro V1, an established tour favorite and widely regarded as one of the best golf balls on the market today.

TaylorMade interviewed a large number of amateur golfers to find out what to expect from a golf ball, particularly when it comes to performance and budget.

The solution was to develop a three-piece ball that could offer tour-level performance at a lower price with less compression. The softer core, which is rated with a compression of 70, makes it easier to hit and offers more golfers comparable distance and feeling advantages over a broader level of performance.

We tested it on the golf course and on a launch monitor to see how it compares to Titleist’s market-leading Pro V1.

The TaylorMade Tour Response has a premium look and feel. Its 322 nubs form a clean, uniform pattern and thanks to its 100% urethane coating it feels extremely soft and sticky, a property that is normally only reserved for the best premium golf balls.

The number on the Tour Response is a subtle red and the branded alignment arrow shows the ball name and offers alignment options for teeing off and putting.

The Titleist Pro V1 has more dimples (388) in a neat pattern with a black number and classic Titleist scripting. The alignment arrow has the model name Pro V1.

The TaylorMade Tour Response feels firmer than the Pro V1 when you hit it, especially on the putter surface and wedges. It is less noticeable in the long game.

The Pro V1 felt superior on the greens, was more responsive, and generated more spin in short play tests and especially on short to medium, low pitch shots. On higher, softer strokes, such as lobs and greenside pitches, both balls felt soft and responded well to landing.

The flight and spin profiles of the TaylorMade Tour Response and the Titleist Pro V1 are quite different and this has proven itself in the test, especially with drivers and irons.

The Tour Response is a low-spin ball with a high launch and a softer compression core. The Titleist Pro V1 is designed to take off lower, spin less, and fly with a piercing trajectory.

Both balls quickly stopped on approach shots into the green, but the Pro V1 had a noticeably lower flight. Tour Response had a flight profile similar to that of the best TaylorMade golf balls like the TP5 and TP5 X, starting medium high with less spin and a straighter flight.

In driver testing, TaylorMade Tour Response took off and flew in a stable, constant flight. The tests with the launch monitor showed spin rates of just under 3000, high ball speeds and distances that come close to those of the Pro V1.

The Titleist Pro V1 was slightly longer in the Launch Monitor tests, by 7 yards on the driver’s best strokes and up to four yards on 7 irons.

Even so, the tour response is quite long, averaging over 170 yards with 7 irons on the launch monitor – which is good compared to my stock yardage of 169 – that was during the gapping test on a Foresight GC2 launch monitor was achieved.

Given its lower price, TaylorMade’s Tour Response delivers the promised distance, flight stability, and control and spin when hitting the green.

Both balls tighten around the green during a multitude of short-game shots, the Pro V1 easily demarcates it due to its combination of a soft feel and constantly high spin response.

Launch Monitor tests showed that I got a fraction more short game spin with the Pro V1 than with the TaylorMade Tour Response.

Both balls were consistent in flight and performed well in a cold wind of 20 mph while testing on the track. I would rate them as super reliable options for golfers who want to choose accuracy in their long game.

Which ball should you choose?

Choose the TaylorMade Tour Response if …
– You want a three piece golf ball that is good value for money that works like tour models
– You want a more high start, good distance and stable flight in the long game
– You prefer a firmer green side
– Stability of value over time