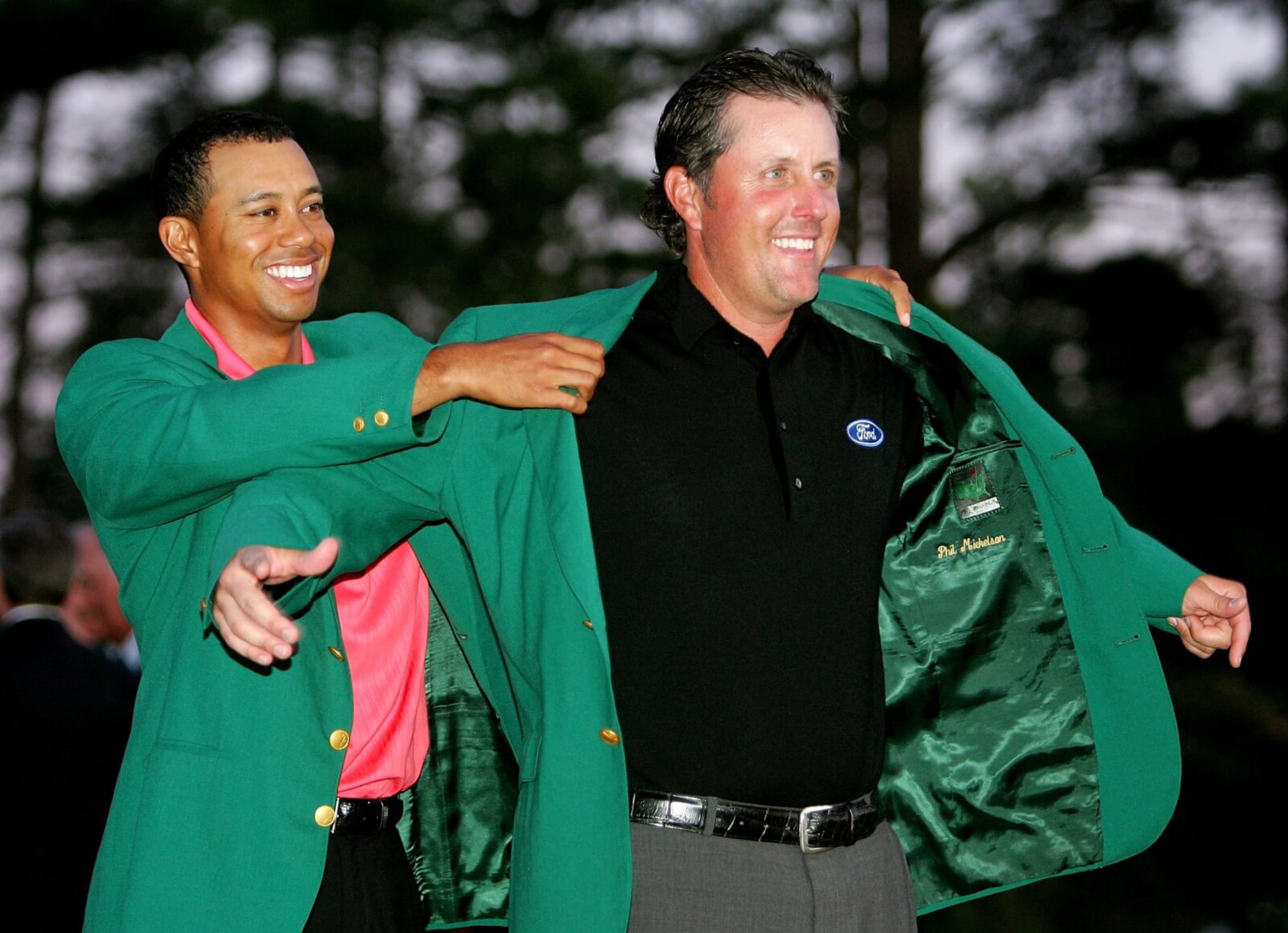 When golfers can’t play golf, they want to watch golf or read about golf.  That’s just the way it is.

Fortunately, for gift-giving needs, three prominent golf and sports writers of our time have come out with books this spring, just in time for Father’s Day.  One is on Phil Mickelson, and it’s by Alan Shipnuck.

One is on Mickelson and Tiger Woods, and it’s by Bob Harig. And the final one, by Rick Reilly, formerly of Sports Illustrated and the LA Times, is what the late, great sportswriter Dan Jenkins would call a semi-hilarious collection of stories and anecdotes.  Some are true, some are humorous recollections and some are completely ridiculous fiction.

After perusing the pages of each, here is a summary of what’s inside so that you can make a decision on which one fits your golfer.  (If you happen to be female, snag a copy for yourself!)

Now, if you like a gossipy read, try the unauthorized biography of Phil Mickelson titled simply Phil with a descriptive bit: The Rip-Roaring and Unauthorized Biography of Golf’s Most Colorful Superstar. It’s by Alan Shipnuck of the Firepit Collective.

Shipnuck used to be with Sports Illustrated and Golf Magazine, but, like many writers, was downsized in favor of short articles that quote other people online instead of producing 3000 to 5000-word printed articles that explore a topic or person or outline what happened at the latest major in-depth.

Phil is 99.9 percent filled with anecdotes about Mickelson from the time he started playing golf and started winning junior tournaments in San Diego to going off the rails (That’s my description, not the author’s.) with the LIV Tour.

There are great stories about how Mickelson honed his short game skills, how dedicated he was to improving, how he met Steve Loy, who later became the golf coach at Arizona State and eventually Mickelson’s agent, how he met Jim “Bones” Mackay and how the relationship went south.  Of course, the focus is on winning the most important titles in his career.

However, only one page features the quote about his opinion on the Saudis and the phone call Mickelson, strangely, made to the book’s author where he used language he would surely like to take back.

Again, only one page deals with how he wants to monetize shots he hit in the past. He feels the PGA Tour is keeping this from happening, which clearly exposes his lack of knowledge on how rights fees for the PGA Tour are handled and why. Either that or else he has yet to explain his real issue. ( That’s just my opinion.)

There are a few tales of gambling on other sports, and innuendo about his former friendship with Billy Walters, who was jailed for insider trading on a stock.

Impressively, there are examples of Phil Mickelson leaving outsized tips for waitresses who, no doubt, appreciated them.  There are seldom reported stories of him helping veterans and their families, even building a house for one.

There’s the annual Mickelsons buy-school-clothes-and-supplies-for-a-thousand-or-so-children in San Diego event, as well as other monetary gifts to people who really need it.  Actually, there are tales of generosity beyond belief.

The book ends with Mickelson and his wife, Amy, holding hands and walking off the course after the Ryder Cup at Whistling Straits. Now if you are looking for wall-to-wall bad stuff about the Mickelsons, it’s not here.

If that’s what you are looking for, just go online and you’ll probably find something bad but not necessarily true. This book is more positive than a negative account of the career of one of golf’s greatest.

Next, Tiger and Phil: Golf’s Most Fascinating Rivalry compares and contrasts two of the best players ever and some of their interactions with each other.  To have the two of them together in a book is something nobody else thought to do.

But Bob Harig did.  Harig used to write for a newspaper in the Tampa area, then for ESPN, and now SI.com. He’s covered a lot of the careers of both Tiger Woods and Phil Mickelson. And his son was named for Jack Nicklaus.  That’s being deep into golf!

Harig takes us back and forth in time at the outset. His beginning is the 2004 Ryder Cup where U.S. team captain Hal Sutton decided to give the people what they wanted, and he paired Woods and Mickelson.

Unfortunately, it was without any prior knowledge by the players, so neither had a chance to get used to the idea.   In addition, the standing problem for Ryder Cup in those days was that nobody else could play Woods’ golf ball, which was softer than anyone else used.

Phil Mickelson made an effort and went to an undisclosed golf course the Wednesday of the matches to see what he could do with it.  Complicating matters, Mickelson had just changed to both Callaway clubs and ball, and he was still adjusting to that.

The best that can be said for the result was that it was an unmitigated disaster from both a personality standpoint and a points-on-the-board standpoint.  But it was something people really did want to see.

According to Harig, nobody thought it was a bad idea, or if they did, they didn’t have the guts to say so.

Backing up from that as a starting point, Harig takes everyone to where it all began for both childhood phenoms, their junior golf years in Southern California.  He proceeds to Woods’ 15th major and Mickelson’s historic PGA Championship win at age 50.

Really, it’s an interesting choice of two subjects who, for many years, seemed not to like each other at all.

After Mickelson’s comments following the U.S. defeat at the 2014 Ryder Cup, he and Woods seemed to become at least comrades in arms on the subject of building a better system for creating future Ryder Cup success.

There’s some overlap in anecdotes in the first two books, and there was bound to be since Mickelson has a larger-than-life personality and lifestyle, and half of the second book is devoted to him.

So Help Me Golf

However, the third book, So Help Me Golf, by Rick Reilly, does not focus on those two, although Woods makes an early appearance.

Reilly’s specialty is taking the ordinary and finding the funny in it, or just plain inventing the funny. For years he wrote the back page column for Sports Illustrated.

I found myself laughing out loud when reading So Help Me Golf, something I usually do only when reading a Janet Evanovich book about Stephanie Plum, the inept bail bonds agent who keeps getting her cars blown up or otherwise destroyed.

The Reilly stories are at least a chuckle or a smile, if not more.

For instance, there was the 11-year-old kid who – playing with Tiger Woods — made a hole-in-one while at the opening of Bluejack National.  Reilly wonders, can you imagine how nervous he was?  Then he makes this hole-in-one?

There was the – I’m guessing totally fictitious – interview with what has to be an equally fictitious club pro who said he missed his first 44 cuts when he was trying to play the Tour.

But that wasn’t as bad as when he signed a contract with US Kids and later discovered it meant he had to play the clubs. The club pro said he used a 35-inch driver for two years and it nearly ruined his game.

Continuing, the pro says his current putting stroke is someplace between Billy Mayfair’s in his prime and getting tasered.  It’s irreverent. A bit naughty.  Fun to read.

So, this year, there are real books you can buy for Father’s Day gifts. Your favorite golfer will enjoy any one or more of them.  If that doesn’t work, buy him a simulator. You’ll go to the top of best present ever list, but it will really set you back financially.  Whereas, a book, is not super expensive and provides lots of rainy day entertainment.