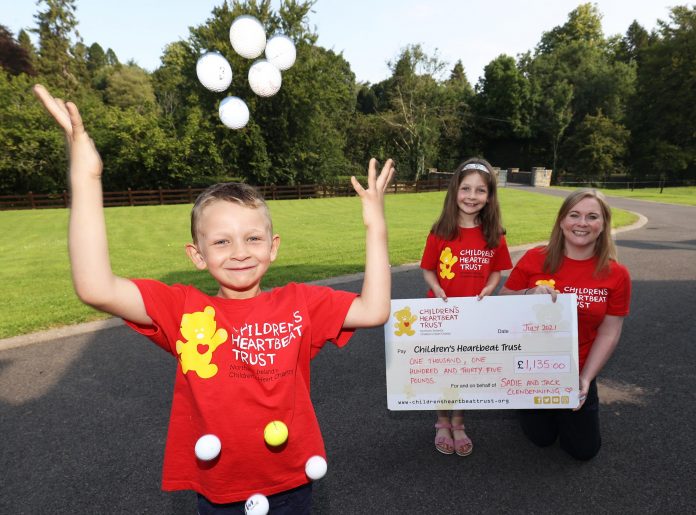 SADIE Clendenning (8) and her brother Jack (6) from Fivemiletown recently raised 1,135 pounds with their creative minds for the Children’s Heartbeat Trust.

The children raised the money by collecting old golf balls and reselling them to raise much needed money for the charity.

Her mother, Gillian, said the kids were out on the golf course in nearby Clogher Valley one day and their father Timothy found some lost golf balls, and it soon turned into a competition to see who could find the most.

Gillian explained, “They wanted to outdo him quickly and see who could find the most, so it became a really big competition.”

“Local golfer Paul Campbell was out on the course to talk to the kids about their activities and he ended up saying he would buy them some.”

She added that this was when the idea of ​​raising money for a local charity came up.

Gillian, who works for the Our Hearts Our Minds charity, said she took the kids online to find a local children’s charity in Northern Ireland, and The Children’s Heartbeat Trust seemed the best fit as it was “close to home and their hearts” is. .

The children collected as many golf balls as they could find and were donated by neighbors Mervin McElwaine and Hazel Spear.

“They cleaned the golf balls like new,” said her mother. “They then organized a Covid-friendly fundraiser from our own garden.”

She continued, “You have enjoyed every minute of the fundraiser and are very pleased with the results.”

The Clendenning family thanks the generosity of the children’s school, Fivemiletown Primary School, as well as local businesses, neighbors and friends who spread the word about the children’s event.

Gillian added that she and her husband were “super proud” of their children and said, “They never dreamed that they would raise as much money as they did.”

Micah Christenson comes from a family of athletes and is one...