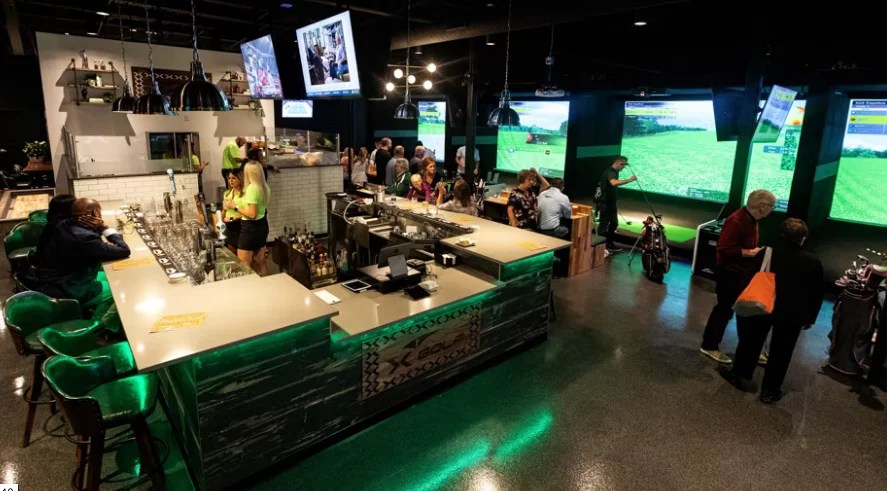 “Last year when work was slow due to the pandemic, my wife and I (pictured below) had joined a country club and played a lot of golf,” said Schwartz, 42, of Dix Hills. When the season was over, I asked, ‘How do I keep playing?’ “

That search led Schwartz to XGolf, a Los Angeles-based company specializing in the virtual golf experience. According to Schwartz, who is slated to open its own location with a restaurant, bar and lounge in February, the franchise has opened or will open 75 locations in the near future.

The new franchisee is preparing the former 11,050-square-foot Babies R Us at Commacks Veterans Memorial Center between Harbor Freight and Five Below for its first location and hopes to open more if that proves successful for the region.

He is realizing his vision months after TopGolf opened in Holtsville and quickly became a popular spot and when Birdies, another golf simulation experience, is slated for Patchogue.

“I think the Long Island golf community needs this,” he said. “We have probably five months of good golf weather here, maybe less. I think we have one of the largest golf populations in the country and that’s the kind of thing people want to do.

“They want these experiences in which they get out and not just go to a bar and have a beer, but also do something with their friends in a beautiful setting and maybe learn something in the process.”

virtual reality in a real environment

The proposed XGolf will include five bays approximately 4.50 meters wide and 25 feet deep. Players will swing real clubs on real golf balls against a screen that projects a real course. A professional software and hardware package consisting of cameras, impact sensors and infrared lasers calculates the distance and speed of the ball.

At the push of a button, said Schwartz, the system will pop a ball on a tee with every swing.

The game may be digitized, but Schwartz wants the atmosphere to have the personal touch of a real golf course. To do this, he said, a PGA professional will oversee players of all skill levels.

“I want them to run around and give advice like a pro would do on a golf course,” Schwartz said. “I don’t want anyone to go in and out without being noticed. Everyone should have a VIP time here. “

Schwartz points out that while XGolf serves beer, wine, spirits, and a range of bar foods such as pretzels, pizzas, and wings, golf is the priority.

“We don’t want it to be just a bar with people swinging metal sticks,” he said. “We want this place to feel like a golf course. I don’t want it to feel stuffy and exclusive, but I want people to feel rightly treated, that they are here for an experience on a high-end golf facility that is open to all. “

Schwartz wants to appeal to professionals, both on and off the pitch.

He will go before the Smithtown City Zoning Board of Appeals on October 26 to obtain approval to build a mezzanine floor with a conference room for networking events, birthday parties, and private parties before groups take to the streets.

XGolf also offers league games for those who want to take part in regional and national tournaments.

“These are local leagues,” said Schwartz. “But we have an app system with which, as soon as you’ve played enough here, you can determine a handicap just like on a real golf course.”

Above: A screenshot of the following XGolf promotional video posted on the company’s website.