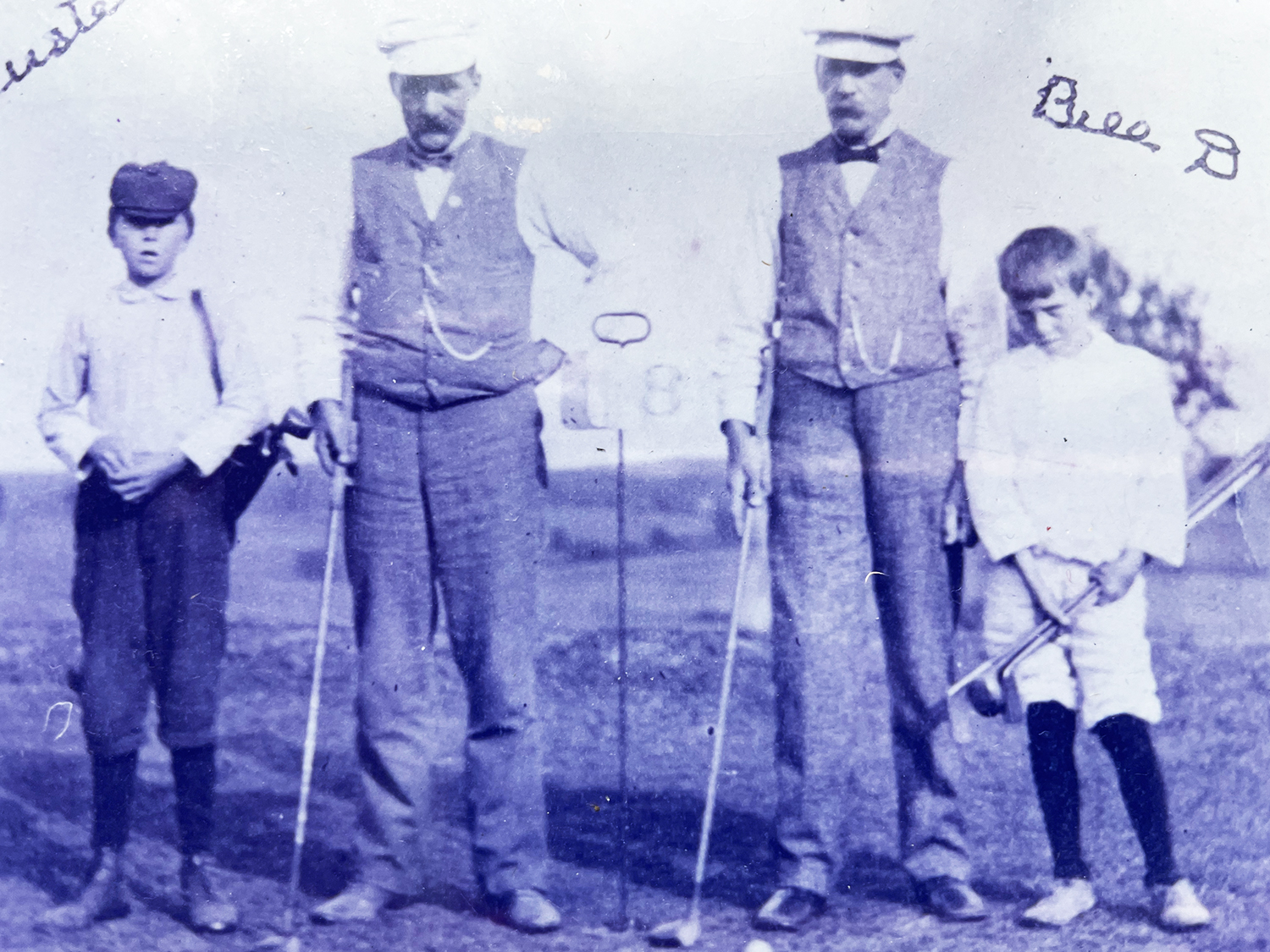 The Shelter Island children have long served as caddies at Goat Hill. On the right is Bill Dickerson, circa 1930, with clubs for some players with stylish mustaches. (Credit: Courtesy Lauren Dickerson)

The Shelter Island Country Club’s 9-hole public golf course was established in 1901, but the first round of golf on Goat Hill was not played until a year later.

So it made sense for Mary Fran Gleason, Chair of the 120th Anniversary Committee, to celebrate the 120th anniversary of the oldest continuously operating golf club in the area for an entire year. This celebration begins with a benefit concert on September 18th with hors d’oeuvres, a raw bar, a raffle and door prizes.

Over the next 12 months, the celebrations will include parties, talks, and a vintage golf tournament where participants use hickory clubs.

The Shelter Island Heights Association founded the club around the turn of the century to give the young people of Shelter Island something to do. As the island’s demographics have changed, Goat Hill has become a place where the elderly have something to do too, and much of the fundraising campaign this anniversary year is aimed at getting more golfers into the sport for the first time.

Reaching the US $ 120,000 fundraising goal will enable a new program that introduces novice golfers – one that doesn’t require hiring a professional and can be taught by any good golfer. Improvements to the terrain and the driving range are also planned.

In 1942 the Heights Association was ready to shut down Goat Hill, but Bill and Olive Congdon took over control during the war and for decades after, finally handing it over to George Blados in 1976. In the late 1970s, the Heights Association decided it sold the entire property and the city bought it and has been running it as a volunteer board of directors public course since that time.

The golf course is an authentic gem from the past built into the landscape with shovels, horses and donkeys rather than the bulldozers used to build modern golf courses. PGA Hall of Famer George Lewis said of this venerable course that you learn to play it by “feeling” the landscape.

Mr. Lewis will be the keynote speaker at the Shelter Island Library’s Friday Night Dialogue on Zoom on Friday, September 17th.

Goat Hill has long been the recipient of well-deserved affection and respect. Golf there is a particularly strategic game, true to the game as it was originally intended.

Generations of island children grew up there, whether serving as caddies (some were busy before child labor laws came in), rolling around in an electric cart in July, or sliding down the third hole on a toboggan in January.

Goat Hill is the run of the people and is in the beating heart of the community.