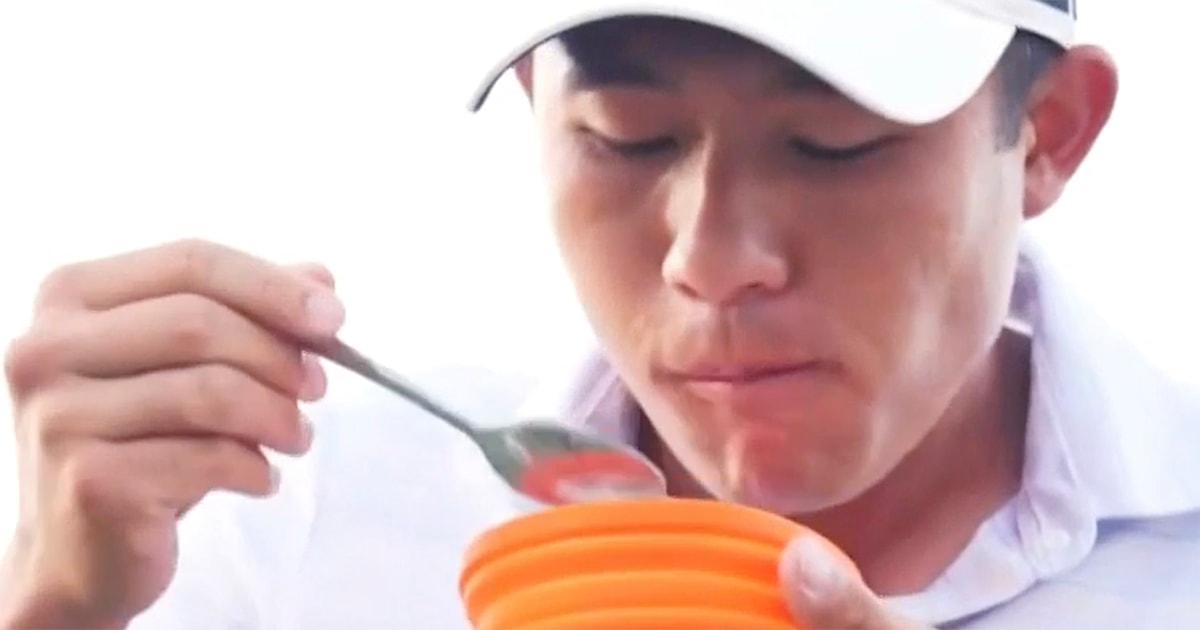 Golfer Collin Morikawa is used to being in the spotlight, but the 24-year-old is making headlines this week with something quite unexpected: his bizarre grain-eating habits.

In a video that quickly went viral, Morikawa can be seen eating cereal while practicing his swing. At the beginning of the short clip, Morikawa pulls out a collapsible bowl and you think he wants to fill it with cereal, but instead reaches for the milk.

See you all day TODAY! Get the best news, information, and inspiration of TODAY all day.

The golf star first pours the milk, then adds some muesli and takes a bite. Next, he’ll return to training for a while but come back for more cereal and grab a straw to soak up the remaining milk when he’s done.

Instagram users were quite surprised with the clip, and many of them had to double-take to fully understand what they were just watching.

“Did he first pour the milk before the muesli … no no NO”, wrote a social media user. Another commented: “Milk first … what kind of magic is that?”

The overwhelming majority of commentators seemed puzzled by the golfer’s bohemian habit, but some were intrigued.

“What exactly are we seeing here and how can I get some?” one wrote.

On Wednesday, Morikawa spoke to NBC Sports’s Mike Tirico and TODAY about this weekend’s Tour Championship, also known as the FedExCup Playoff Final. During their conversation, the TODAY moderators couldn’t help but ask the golfer about his unexpected approach to eating cereal.

“I’m so glad you brought that up. This (was) a major problem with college dorming with one of my teammates. It’s just what I do. My parents never did. I don’t know who I picked it up from, “he explained.

Morikawa admitted that his approach to eating grain may seem a little backward, but he encouraged people to give it a try.

“If you really hate it, I get it. Send me some hate. But I’ll never change, ”he said with a smile on his face.

Morikawa, who recently returned from the Tokyo Olympics, said his favorite cereal is Cinnamon Toast Crunch.

According to a recent article on PGATour.com, the head covers are specifically designed to protect rackets while holding cereal and other breakfast accessories (like spoons and straws).

During the interview with Morikawa on TODAY, Tirico first listed an advantage when it comes to adding milk to your cereal bowl.

“It’ll stay crispy if you put the milk in first,” he said.

“I like a lot of milk in the bowl. I know how much granola I’m going to put in it. You pour enough in, stack it on top, you’re good,” explained Morikawa.

At this point Dylan Dreyer paid the golfer some appreciation for putting so much thought into his technique.

“You came up with a science,” she said.

Craig Melvin, on the other hand, was still unsold and was enjoying joking around with Morikawa.

“He seemed perfect in every way and now we are discovering that he is a sociopath,” he said.

Chrissy Callahan covers a variety of topics for TODAY.com, including fashion, beauty, pop culture and food. In her spare time, she likes to travel, watch poor reality TV and eat loads of cookie dough.