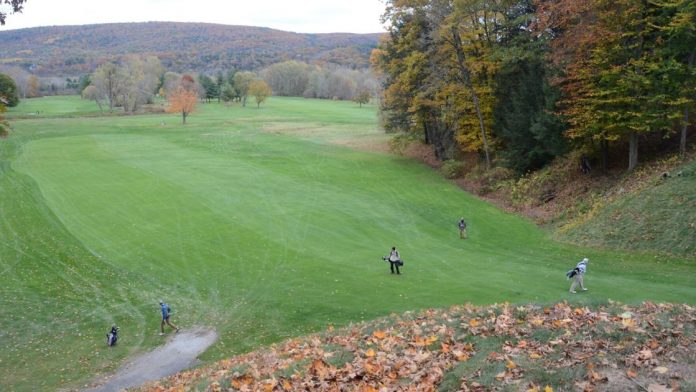 Marc Jemilo and Marshall Prokop took the lead early on and never looked back last weekend. They successfully defended their title at the 11th Worthington Cup Best Ball tournament at The Links at Worthington with five shots.

The duo, both members of the Hampshire County Club, fired a 3 under par 67 opening to take a three-shot lead, then improved five strokes ahead of links member James Ryan and with a final round of 65 on Sunday Suffield (Conn.) Country Steve Flint. Ryan and Flint produced rounds of 70 and 65.

Another highlight of the day was in the Second Division, where women’s left club champions Chris Eugin and partner Liz Kay towered over the boys and combined for rounds of 78 and 76 to win with a comfortable six strokes over Dennis Bolydga and Robert Smith (82- 79).

Things got tighter in the First Division, where the pairing of John Dabrowski and Peter Cowlin needed a two-hole playoff to beat Chip Moore and Leo Kruczowski for the highest honors. The winners had rounds of 73 and 72, while the runner-up shot 75-70.

Left general manager Scott Preston said ahead of the tournament that the club hopes to make the cup a tournament that will attract from across the region. This year’s field showed some success in this regard – there was good participation from players from the Pioneer Valley and a pairing included two members of the Cape Cod Country Club.

For a while, it looked like this year’s Wyantenuck Invitational at Wyantenuck Country Club was at risk from severe flooding on its Back Nine caused by the massive rains that have hit the Berkshires in recent weeks.

But unfortunately, thanks to the work of Superintendent Peter Bacon and his hard-working crew, the historic tournament – it has been played for more than a century – ended on Friday, admittedly with some adjustments.

“We are closed for almost a week,” said Wyantenuck chief professional Mark Levesque. “We thought we’d be fine until we got 1 1/2 inches of rain on Wednesday night. Because of the rain, we had to make some contingency plans.”

These plans went into effect for the 18-hole opening round on Friday, which determined the composition of the flights.

“For the qualifying round,” he said in a telephone interview on Thursday, “we will play holes 1 through 12 and finish the 18 for a 13-hole round.”

This plan has been followed with the expectation that all 18 holes will be played when the game started on Saturday morning.

The tournament drew a full field of 56 teams and 112 players, with cousins ​​Mike and Ben Schopp trying to defend the title they won in 2019. Last year’s tournament was canceled due to COVID-19. The Schopps are Wyantenuck members.

This year’s tournament takes place as the club celebrates its 125th anniversary, but how many times the invitational has been played is a matter of dispute.

“Historians say 117, but some other members believe it is 119,” Levesque said.

Either way, this version has drawn a field from across the region, particularly from neighboring Connecticut and New York. Levesque said the 112 golfers represent 38 different clubs.

Two champions of the United States Golf Association will compete in the title match of the Massachusetts Amateur Championship at Brae Burn Country Club in West Newton today.

Parziale defeated Chris Bornhorst with 4 and 3, while 19-year-old Thorbjornsen – a newcomer to Stanford – ousted Chris Francoeur with 3 and 2. They won their quarterfinals that morning.

The 36-hole championship game took place on Saturday morning at 7am in Brae Burn.

at The Links at Worthington