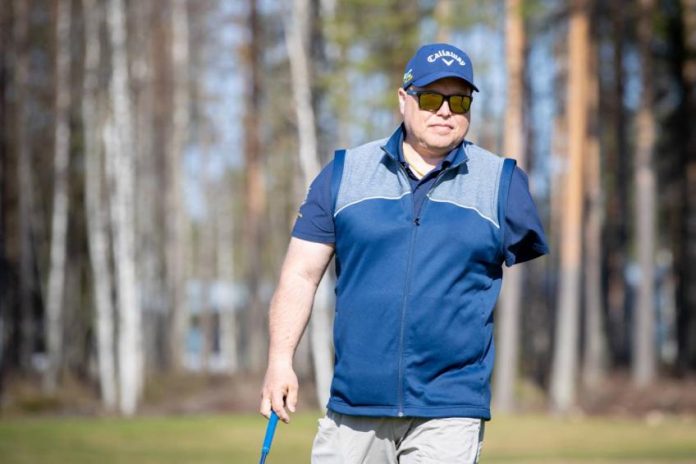 Petri Takkunen, European Disabled Golf Association golfer, shares his story about losing his arm, learning to play golf and his advice to others who may have gone through what he presented this week on the Player Blog from Enterprise Rent-A-Car .

“Over twenty years ago, before I ever picked up a golf club, I lost my arm in a car accident.

It happened at 2pm on a street in Linköping, Sweden, when I lost control of the car and ran into a drain. I don’t remember the accident, but I was in a coma for five days. When I came to, I had multiple head injuries that left me with epilepsy and the loss of my arm.

It affected every part of my life. I was an electrical engineer in the army and that affected my work, my free time and all of the sports I played. I also lost some of my friends back then, maybe because they just didn’t know how to react to me.

I had to spend a lot of time at home relearning how to do so many things differently than I ever knew before. It’s been a steep learning curve, but I’ve never given up. “I played a lot of sports before the accident, from Thai boxing to ice hockey and tennis to shooting, but golf was never one of them.

And I didn’t get into it right away. About four years after my accident, a friend of mine suggested I try golf. I think he had seen something about golf with a disability and thought maybe I could play so I decided to give it a try.

I went to the driving range and tried, and although it was really a challenge, I felt like I could do it. I did a little research myself, also found EDGA and applied for a pass to play.

I actually started playing with my right arm in the forehand position in a typical right-handed swing for about three years. I played pretty well, but when I was training a lot over the winter, I found that it felt better when I switched to what I call backhand with left-handed right arm clubs, and that’s how I play today still.”

“But it wasn’t an easy journey. Although I lost my left arm in the accident, my right arm was also broken, causing a lot of problems and pain in my arm and shoulder. It became too much for golf and I stopped playing from 2005 to 2013 and had to have an operation.

I decided to try again in 2013 and I really spent my time on it. It takes a lot of focus to practice, to get better at what I like about golf, so I’ve put a lot of work into it. After doing that, I found that I was improving really quickly and handicapping a single figure fairly easily.

The sense of community while golfing and golfing for the disabled was very important. I like golf because it is a challenge and you have to think carefully about each shot and execute it. But the social side of playing with other people is also a great thing about golf as we often don’t know who we’re going to be playing with but we are sharing the same game.

“In golf with disabilities, we have the opportunity to meet in Finland and other countries, and there is a good sense of community among the players. It really is like a family where the players enjoy each other’s company and share the experiences of golf and play with their disabilities.

Getting even more people into the sport is a big goal for all of us as I know there are many people with many disabilities who play and could really benefit from enjoying the game. Experiences like this and last week in Scotland mean a lot as we get to meet other players with the same and different disabilities.

It was my first time playing with Masato who is from Japan and it was great to compare our games. But the most important thing is to be with the players on the European Tour and see how they prepare, work and practice. ”