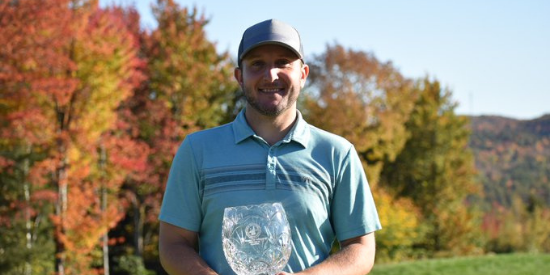 Ryan Kohler joined five other players to become consecutive winners of the New Hampshire Golf Association mid-amateur. He shot a final round of 74 (+2), holding back a hard attacking Jim Cilley to win the championship in two shots. Kohler started the day five shots ahead and after a 90 minute fog delay his lap started unevenly. He bogeyed on the second and fifth holes, and although he made a birdie on the 9th par-4, his lead was reduced from five strokes to three by the time the last group went home. Cilley continued to exert pressure as he tied Kohler’s birdie on Par-5 11 and then made his own on Par-4 12. Kohler then bogeyed on par-5 14 and the lead had shrunk in one fell swoop.

The players played bogies on the 16th and Kohler played the last two holes in straight par while Cilley’s bogey on the last gave the champion his win with two strokes.

“I started slowly and the track was much more difficult to set up than on the first two days,” said Kohler. “Jimmy played great all day and kind of turned it into match play. He just kept chopping and chopping off. We got to 18 and I was 1up. Made a mess but made a 50 footer for the par that probably went away from the green, probably pretty good luck. But yes, it was a fun day. “

Kohler joins the elite firm as a back-to-back winner and he knows what a challenge this event is. “These guys are so good, that’s what makes it so special. However, it feels great to win, especially on a great golf course, ”he added.

While the last two were up against each other, Harvin Groft won the championship round with a 5-under 67. His round comprised seven birdies and finished the 54-hole event in solo third. Craig Steckowych ended his week on a straight par 72 round, finishing fourth, and Cam Salo and James Pleat rounded out the top five.

The victory crowns an eventful year for Kohler. He finished third at the Vermont Open and was a replacement at his local US Open qualifier and eventually made it to the final qualifying round in Columbus, OH. He was also the first substitute for the US Amateurs, reaching the quarterfinals of the New Hampshire Amateurs, eventually losing 5 and 4 to champions James Pleat.

A total of 29 players survived the 36-hole cut and the Montcalm Golf Club proved to be a tough golf test throughout the week. Groft’s final lap got even more impressive as it was the only under 70 lap all day. Only three players were below average that day (Groft, Cilley and Salo).

ABOUT THE New Hampshire medium amateur

The tournament consists of 54 holes of stroke play with a cut for Saturday to a low of 27 players and a tie. Eligible are male members of NHGA clubs with legal residence in New Hampshire, in good standing. Applicants must be 30 years old on the first day of the tournament.