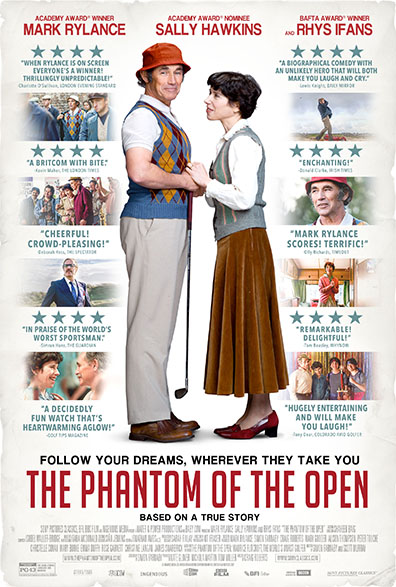 The opening film for the 2022 Minneapolis St. Paul International Film Festival starts with a chuckle, a laugh, and guffaws. I think it was a brilliant move for the Festival to open with a comedy/drama after these last few years of COVID 19 and unrest.

Mark Rylance plays a real-life Maurice Flitcroft, a crane operator for Vickers shipyards, following in his father’s footsteps. He is married to his lovely wife Jean (Sally Hawkins) and has 3 sons: Michael (Jake Davies) and twins Gene (Christian Lees) and James (Jonas Lees). In the movie we get a peek of Gene and James as disco dancing champions.

Maurice has no hobbies. Jean suggests he find one. One day he’s watching a golf tournament on TV and has the idea that he could play golf even though he never swung a golf club. Despite their misgivings, Maurice’s family encourages him to golf. He tries repeatedly to join elite golf clubs but is always snubbed. I suspect the snubbing may have been based more on class than skill.

He moves on to try to get into the 1976 British Open, and is turned down over and over again. Finally, the tournament chief, Keith Mackenzie (Rhys Ifans) relents and allows him to play.

Scenes at the British Open are hilarious as the crowds are baffled watching Maurice play. After embarrassing all of Great Britain with the worst golf score (121) of the Open, Mackenzie has a schadenfreude about Maurice’s disasters on the golf course. Maurice’s oldest son Michael, who has a corporate job, is thoroughly humiliated watching his father on television. Maurice, though, manages to become famous (infamous) around the globe.

In the hands of the more than capable actor Mark Rylance, the story keeps from being frivolous. Director Craig Roberts gives us an important value lesson: Persistence can be more admirable than actually winning.