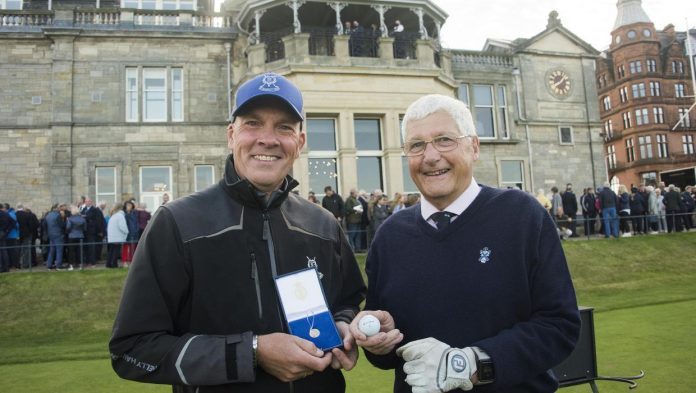 The traditional entry ceremony for the new captain of the Royal and Ancient Golf Club of St Andrews took place on the 1st tee of the Old Course last Friday.

eter Forster began his year in office with a trip at 8 a.m. sharp when a cannon fired next to the tee.

As captain of the Royal and Ancient Golf Club of St Andrews, Mr. Forster will serve as ambassador for The R&A to support its work in developing golf around the world and will participate in professional and amateur R&A championships, including The 150th Open at St Andrews next July.

After his tee shot, Mr. Forster said, “I am truly honored to be the captain of the Royal and Ancient Golf Club of St Andrews. I look forward to representing the club and The R&A in the coming year as we celebrate the historic staging of the 150th Open here in St. Andrews.

“It was fantastic to see how many colleagues from the city came to this wonderful tradition and enjoyed the atmosphere around the first tee. I was definitely relieved and delighted to make good contact with the ball and give the caddies a decent shot to catch up with. “

Mr. Forster was born in Edinburgh and studied at the Rannoch School and then at the Agricultural College in Aberdeen. He began working on his family-rented farm Peacehill, Wormit, ten miles north of St. Andrews, in 1972. He is now retired and continues to serve as a director of Peacehill Farming Ltd and Peacehill Gas Ltd.

Mr. Forster is 71 years old and currently plays with a handicap of 18. He is married to Mary and has two children, Karina and Ross, and six grandchildren. His other interests include fishing, mountain hiking, skiing, snowboarding and tennis. He played rugby for the Panmure Rugby Club and was its president from 1999 to 2001.

In the past, Club Captaincy was awarded to the winner of the annual challenge for the Silver Club, but in the early 19th century the Captaincy was an elected office. It is a tradition for the new captain to buy back his golf ball from the caddy, who picks it up and returns it with a golden sovereign.

Ed Rankine, who lives in Leven and has been a caddy in St. Andrews since 2019, successfully returned the ball to Mr. Forster on his third attempt at the drive-in ceremony.

“It feels great to have given the ball back,” said Rankine. “I actually did for Peter Caddy during the Calcutta Cup event, so everyone was asking me, ‘Where do you think his drive will go?’ and I said ‘well, I’ll stand to the left of the fairway for a moment’ and that’s how it turned out in the end. “