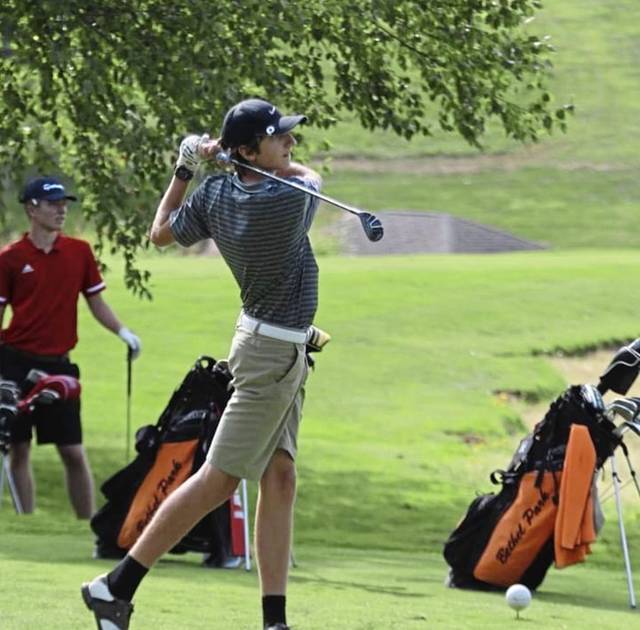 Frank Visnikar is a senior in the 2021 golf team at Bethel Park. Frank Visnikar is a senior in the 2021 golf team at Bethel Park.

“We have always set ourselves high goals and would like to qualify for the WPIAL playoffs this season,” said Kreigline, “and to be a competitive team in our section.

“With a short season and a few new college players, they need to quickly learn our expectations, understand that high school golf is a team sport to begin with, and work hard to make each other better players.”

“We have completed six seniors including our captain John Harmon,” said Kreigline. “We have four returning college players, including three starters.”

“I expect the team to perform well this year considering how many new players we will have,” said Visnikar. “We lost a lot of seniors and the new players will have some big footsteps to fill. Under the guidance of trainer Kreigline it will be exciting to see how we do.

“My goals are to qualify for the WPIAL semi-finals again and hopefully inspire my teammates to do their best. I expect it to be fun to play with my team and compete against the other schools. “

Andrew Kvak, a junior with college experience, is back for the Black Hawks this season.

“It will be fun and interesting to see who is running the tryouts to fill the remaining college spots and see who is ready to compete,” said Kreigline. “There is a big difference between playing golf with friends and playing competitive golf.

“We’ve had some players this summer who are working hard and going into some tournaments to get that competitive experience.”

One in particular was Visnikar, who took part in the Isaly’s Junior and Southwestern Pennsylvania golf tours.

“Both are great opportunities for players to gain competitive golfing experience,” said Visnikar. “I would encourage all players, new or experienced, to take part in these programs.

Visnikar, who has a GPA of 4.1, has been playing golf for four years and will begin his third year of college this fall. He said his favorite place was the Chartiers Country Club.

“My grandmother first introduced me to the sport with a set of plastic golf clubs when I was a toddler,” said Visnikar, “but I only got on my 14th hole course. After this first real golf experience I was addicted. “

Visnikar also plays tennis at Bethel Park, is a member of the National Honor Society and the Latin Club, and is a cellist in the chamber orchestra.

For college he is interested in the field of architecture. And of course the continuation of his golf career.

“Frank really enjoys the game of golf,” said Kreigline. “No matter how he plays every day, you can tell that he’s always having fun on the pitch. He has worked hard this summer to improve his skills and has participated in many competitive events. Its strength is its control. He’s pretty consistent from the tee, which puts him in a good position to score well. “

The Bethel Park coach said Visnikar is a great teammate with a great work ethic.

“Frank is always positive and has a good sense of humor,” said Kreigline. “His teammates enjoy being around him. I think his work ethic and attitude will make him a great leader and role model for our younger players. “

The Black Hawks section first match will take place on August 27 at the Scenic Valley Golf Club’s home against McKeesport.

“The next hole I’ve ever come closer to a hole-in-one was a lip at 11th place in Scenic Valley,” said Visnikar.