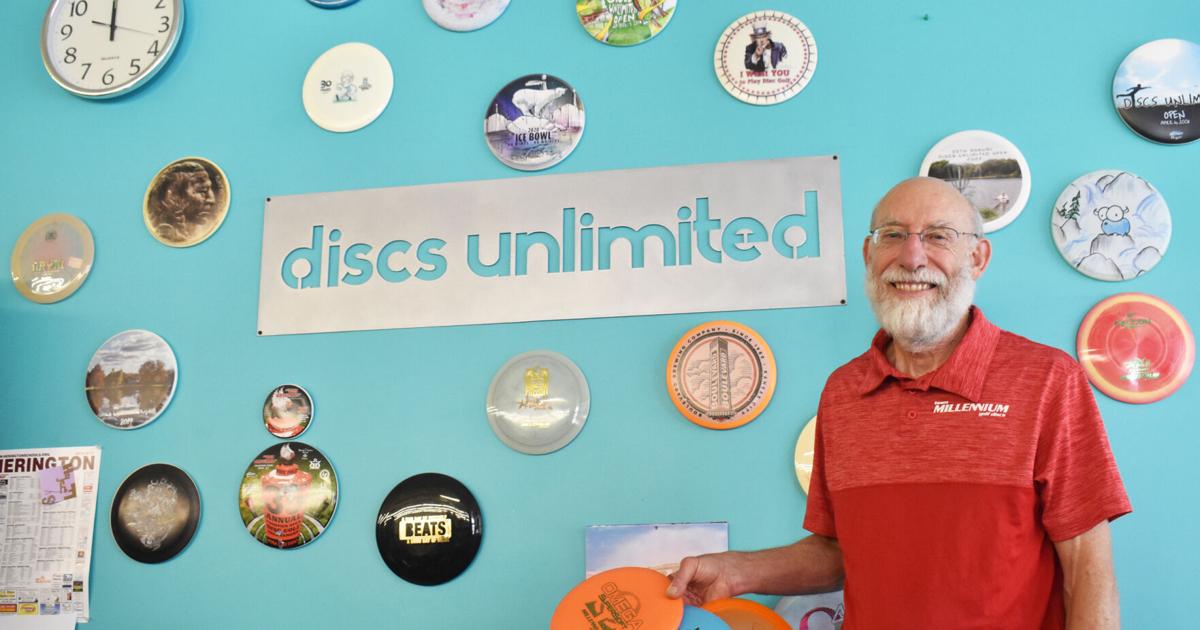 Editor’s note: This article is the first in a three-part series about Dennis Vahsholtz and the growth of the sport of disc golf.

There must have been thousands of discs in his store. Almost every aisle in the former grocery store had cardboard box after cardboard box of discs. Red, neon green, orange, pink, white, black and probably every other color under the spectrum were in those boxes. All with a graphic design on top.

Dennis Vahsholtz owns Discs Unlimited in Herington. Since the 1980s, Vahsholtz has been a part of the disc golf community by playing in numerous professional tournaments and providing discs to players across the state. On April 28, Vahsholtz was inducted into the Kansas Flying Disc Association Hall of Fame for his impact on disc golf in Kansas.

“I am proud to have Dennis Vahsholtz in our first class of the Hall of Fame because he stands for what is right about flying disc sports,” said Rich Smith, president of the association. “Our board of directors wanted to honor those that have performed well in competition, impacted others and have stayed active in the sport over time.  Not only does Dennis easily check these boxes, but he is a gentleman, who always puts others first and cares deeply about our sport.”

“It’s being finally recognized for my service to the industry, just the years I’ve put in helping players in the state of Kansas, giving them a source to where they can get their products easily,” Vahsholtz said. “I’ve helped a lot of cities with their courses, helped a lot of clubs run tournaments and donated a lot of baskets… It was quite an honor.”

Dennis began playing disc golf much like how the sport began: boredom from just throwing a frisbee.

“I was just playing catch with my buddies. Something to do while your drinking beer or whatever,” Vahsholtz said. “You then start throwing for distance, backing up and seeing how far you can throw it. Then you get tired of that. That’s just boring, throwing and running and catching it. Then we started (thinking) ‘well what else can we do.’”

Vahsholtz first discovered competitive disc golf in 1985. Tulsa, Oklahoma, hosted the world championship in 1985. At the same time, Vahsholtz happened to be visiting his sister in Tulsa. As they drove past a riverside park, Vahsholtz saw the championship and disc golf baskets for the first time. Stopping by the park later, Vahsholtz brought his Wham-O frisbee and found a group of players with smaller discs to play with. After asking, they said he could buy a disc at the bike shop across the street.

“So after my round, I went over there and bought my first disc. Didn’t know how to throw it or anything. It throws differently than a Wham-O frisbee,” he said.

With his newfound knowledge and disc, Vahsholtz returned to Kansas. Eventually, he discovered there were only three disc golf courses in the state: Lindsborg, Topeka and Kansas City. Also, discs were difficult to find at the time. There were stores in Colorado and California he could mail order from, but none in Kansas.

“So I ordered some discs from them and thought jeez, this is kind of a pain. If I’m having this kind of problem, I’m sure a lot of other people are too,” he said.

At the time, there were disc golf clubs in Hays, Kansas City, Topeka and a newly formed club in Wichita. In 1987, Vahsholtz called members of each of the clubs and asked if the clubs would buy discs from him if he became a supplier. They said yes, and so Vahsholtz began his business, Discs Unlimited.

“There were only three manufacturers back then — Innova, Disccraft and Lightning — so it was pretty easy. I just called each one of them and said ‘ok, I want to buy in bulk from you. I don’t want to take delivery from you. Just send them as I need them.’ Because I was working from out of my home at the time. I was working out of my home from 1987 to 2015.”

Also in 1987, Vahsholtz hosted his first Disc Unlimited Open tournament. After his first tournament in Hays, he wanted to play so much that he decided to create his own course in Father Padilla Park in Herington.

“I don’t know where I came up with this idea, but I found out that if you cut one side out of a radial tire and turned it inside out, that would be the basket portion. Then all you do is attach that tire to a frame, attach that frame to a pole, and design chains.”

Vahsholtz then went to Oswald Manufacturing Co. with his own chain assembly designs. He didn’t want to infringe on the current disc golf basket patent. His designs were morphed into three separate designs, and he had three of each design made.

“The baskets were really weird designs. (One) was kind of a cone-shaped. Two of (the designs) were fly swatter type because it was set between two trees. You had to come at it front or back. Since the trees were on either side, it was like a croquet thing. Then I had some with plastic covered cables,” he said.

With his three sets of baskets, Vahsholtz cemented the nine baskets into the park’s ground to make a course. At the time, the Father Padilla Park course was the 4th course in the state.

With the Herington Centennial approaching, he decided to host a small tournament to introduce the sport to the community. Vahsholtz considers that tournament the start of the Disc Unlimited Open, an event his business has hosted ever since.

There are now modern baskets in the course. At some point, the homemade baskets were vandalized, and Vahsholtz secured an exercise and fitness grant from the county government to purchase baskets.

“Now we need tee signs and tee pads, that’s the next step. But there’s just not that many people who still play in Herington. It’s just finding the time to do it myself,” he said.

Vahsholtz ran Discs Unlimited as his second job until 2010. His main job was for his father’s petroleum distributor business. When they sold the business to MKC in 2010, Vahsholtz took on Discs Unlimited full-time.

“Up until that time, my wife was involved with it. She kind of ran the business in the 90s while she was raising the kids and I’d help out. My main bookkeeper… her son’s 18. When she started working for us, I think he was about one year old, so she’s been with us a long time.”

“Before that, all the other manufacturers just made DX plastic which got beat up, scratched and lost its flight characteristics very fast. Millennium came out with a more durable plastic that had never been seen before and kind of revolutionized (golf discs),” Vahsholtz said. “Shortly after they came out with their premium plastic, everybody copied. Then they got even better plastic, but (Millennium) started the ball rolling.”

As for Disc Golf Wholesale, since Discs Unlimited purchases discs in bulk, the companies seemed to fit well together, Vahsholtz said.

Vahsholtz said if it weren’t for his wife, Annetta Vahsholtz, Disc Unlimited wouldn’t have lasted as long as it has.

“I was working a full-time job while she was taking the orders, doing the bookkeeping, dragging me into the 21st century with the website and QuickBooks. Before that, we were just writing invoices out,” he said.

The next article in this series will cover Dennis Vahsholtz’s career as a professional disc golf player and intricacies of the sport.