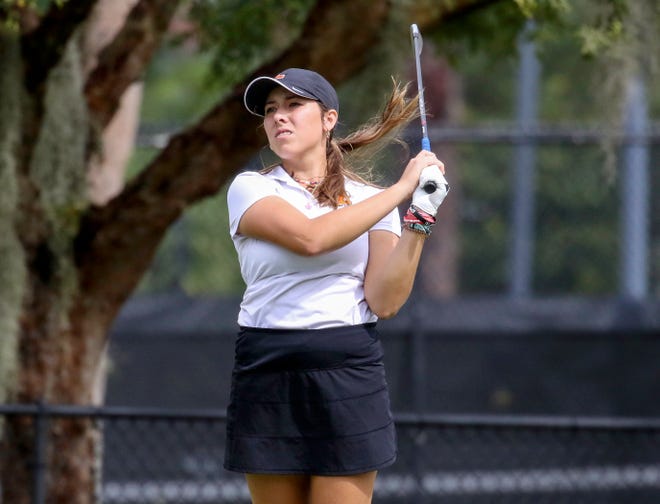 LAKELAND – For the second year in a row, Lakeland’s Analiese Raath fell short of expectations at the Polk County golf tournament.

For the second year in a row, however, Raath was able to come back strongly to win the district title.

The Lakeland senior shot 1-under 71 and was the low medalist in the 3A girls’ golf tournament, District 11 in Cleveland Heights on Monday. It also led the Dreadnaughts to the team title.

“I think I was much more focused today and hit my irons better,” she said.

Raath did a constant lap. She was 1-under on the turn and had three birdies and two bogeys for the round. No particular part of her game stood out, she said.

“Everything was pretty much the same,” she said. “I hit my irons much better today than last week. If I missed the green, I just barely chipped it.

Despite being the defending champion, winning consecutive district titles wasn’t a specific goal.

“I was just trying to do my best and get a good result,” she said.

District Champion Darby Hancock finished second. She had a strong day off the tee that allowed her to use shorter clubs to reach the green. She made 16 out of 18 greens in regulation.

“I had two or three three-putts and I think that hurt me a little,” said Hancock. “But other than that, I was very happy with how I was doing.”

Kate Joyner was almost in the mix for the singles title, but two double bogeys on par-5s turned out to be costly. She shot 4-over 76 and took third place.

“I think we played really well,” said Lakeland coach Mark Joyner. “We persevered. There were a few things that didn’t work out that way, but they stayed there and became strong.”

Eighth grader Ryan Donaldson was unstoppable as she shot 69 to lead McKeel to the 2A-11 district title at Schalamar Creek Golf Club.

Donaldson won the singles title with 12 strokes ahead of Reagan Chastain of Lake Buena Vista.

For McKeel, Ava Bustos was third with an 83, Caroline DeKalb with an 84 in fourth and Morgan Dowdy with an 89 in seventh place.

Samuel Pell and Parker Warren also shot 84 for McKeel to finish ninth with the same number of points.

Lake Wales was led by senior Bryston Fackender who shot 79 and finished third.