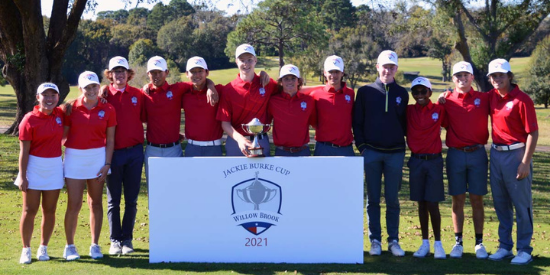 Courtesy of the Texas Golf Association

The South Team won the Jackie Burke Cup on Sunday for the first time since 2013 with a 37-11 win at Willow Brook Country Club.

The Jackie Burke Cup is a team match-play event modeled after the Ryder Cup. Each team consists of 12 players, while North Texas versus South Texas. Every game counts for two points and the team with the most points after Sunday wins the cup.

Willow Brook Country Club is based in Tyler, Texas and is hosting the Jackie Burke Cup matches for the first time. The par 71 layout challenges players as they have to find their way around hilly terrain and avoid the trees. The course joins a stellar list of Jackie Burke Cup clubs including Whispering Pines Golf Club, Champions Golf Club, Brookhollow Country Club, Spanish Oaks Golf Club, Miramont Golf Club, Escondido Golf and Lake Club and The Clubs at Houston Oaks.

With a 19: 5 lead into the individual games on Sunday, the South team took care of business early, won the first three games of the day and secured the six points required for victory.

The last time the South Team won the Jackie Burke Cup was at the Traditions Club in 2013. The temperatures were cold when the south won by 25:23. This year’s South team scored the most points in the history of the event en route to victory. The highest total number to date was 34 points for the North team at Wichita Falls in 2019.

The weather was great again on Sunday with temperatures around the low 40s to start the day and then late afternoon into the high 60s. On the second day the wind was a little stronger, swaying 10 miles per hour.