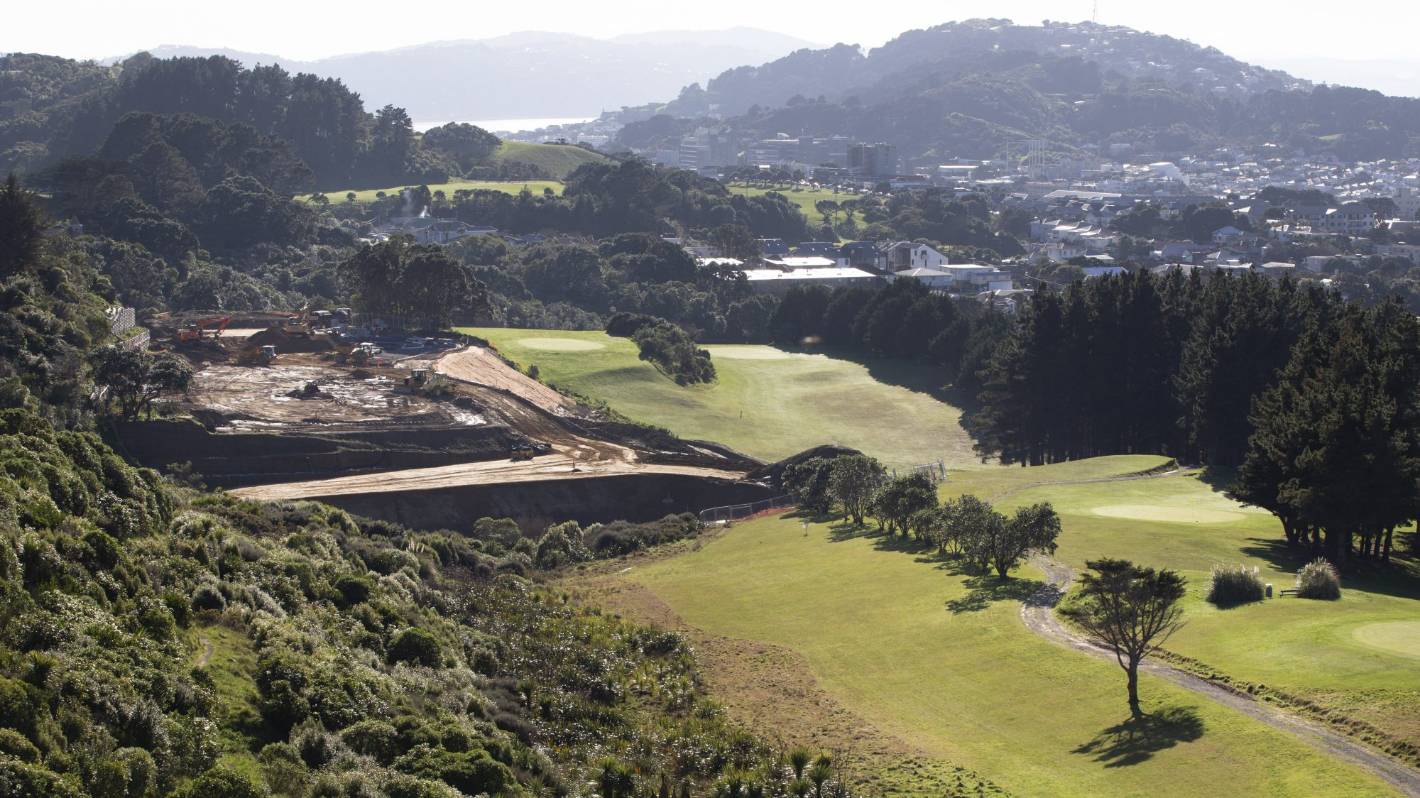 We need to talk about the Berhampore Golf Course. With just over 100 members and an average of seven players a day, the 37-hectare green space is not being used as well as it could be.

Now community leaders – including Wellington City Councillor Laurie Foon and Rongotai MP Paul Eagle – are calling for a debate about the future of this green space.

Wellington’s Berhampore Golf Course isn’t well-used, and it’s not great playing. But calls to put housing on the slice of prime real estate isn’t as simple as it may seem.

It’s not the first time Wellingtonians have discussed the future of the golf course, which sits on the city’s southern fringe. And Wellington isn’t the only New Zealand city to have this conversation. Auckland too has traversed similarly controversial conversations on the future of its dozen golf courses, valued about $3 billion in 2018.

As the housing crisis worsens, the under-utilised area that is the Berhampore golf course naturally draws the eye of those desperate for affordable housing. Let’s Get Wellington Moving proposals for mass rapid transit to the capital’s south coast help make the golf course an ideal spot for residential development.

But the course is publicly owned and protected by law as part of the city’s Town Belt, making the idea of development logistically complicated. Add in the politics of those aligned with the social and green aspects of the club, and it becomes an almost impossible task.

Rongotai MP and Mornington Golf Club patron Paul Eagle doesn’t play golf, but he suggests a well-informed debate before doing away with the course.

Eagle, who also happens to be the golf club’s patron, said the course was a red herring. “The bigger picture here is if Wellingtonians want more homes, and they want it on that site, then they have to be prepared to give up green space,” he said.

If there was appetite for doing away with some of the sacred town belt, Eagle said the city better prepare for a “battle royale”.

The empty green space of the golf course catches the eye of those desperate to ease the city’s housing woes, but perhaps more intensive building, closer to the centre, is the answer.

Instead of building homes on the most precious of land, developers say thousands of homes could be added to the inner-city without much pain. The land is there, they say – if you know where to look.

It’s not that the golf course wouldn’t be a good spot for medium-density housing, but previous proposals have suggested downsizing the course to a nine-hole and using the other section for 500 homes.

Developers Ian Cassels and Peter Dow said Wellington needed to think bigger, and be bolder. Both projected 10,000 homes were needed in the next 10 years to break the back of the capital’s housing crisis.

A dearth of supply has helped push house prices in the Wellington region up by more than 30 per cent in the past year, with the average home now costing more than $1 million.

Ian Cassels is one of those trying to add homes to the stretch of land between the Basin Reserve and the Newtown Countdown, but a braver, broader plan needed to be created for the area.

Cassels said about 3000 could be added in the next few years without much pain. The Wellington Company director reckons we could easily add 30,000 extra people to the central city.

The strip of deadlands running from Kent/Cambridge Terrace to the Basin Reserve, and along Adelaide Rd to the Newtown Countdown, was a spot highlighted by everyone who spoke to the Dominion Post for this story.

Indeed, Cassels is currently working on the 93-apartment Monark development – part of the beleaguered KiwiBuild programme.

The privately owned Miramar golf course was also put forward as an option by Eagle – a suggestion he’s made previously.

However, Infratil, the company that owns the majority stake in Wellington’s airport and specialises in large-scale developments, isn’t interested in buying the remainder of the Miramar golf course land, just yet.

Developer Ian Cassels says 3000 homes could be added to the central city without much pain, but 10,000 is what Wellington really needs.

Of the available land in Wellington, both Cassels and Dow favoured looking closer to home. Dow said those much-needed 10,000 homes could be built in the inner-city suburb of Te Aro in a way that was affordable, sustainable, and greener than what was currently available.

New Zealand shied away from large-scale inner-city developments because those in charge lacked the vision, Dow said, adding that construction and supply costs, and difficulty accessing financing added to the challenge.

But without these types of developments, the city would die. People would by-pass Wellington for more affordable centres, taking their innovation with them, he said.

Those who already own a home are doing well out of the housing crisis, the other 25 per cent need well-planned intensification to ease supply issues.

“We don’t have a housing crisis for two-thirds of the people in Wellington. It’s the biggest housing bonanza of all time. People are spending money like it’s going out of fashion, on the back of the increased value of their property,” Dow said. “But the 25 per cent at the bottom, who are screaming, and carrying the load, we don’t give a s*** about.”

Cassels, who described himself as “an astute advocate” for inner-city living, said Wellington needed to wake up to the economic power of living close together.

“I reckon you can solve any problem by walking around Wellington. You’ll come across three people who will give you half an answer to it in the course of a day,” he said. “It is the most collaborative little laboratory in the world.”

A ‘no’ to the golf course doesn’t mean a ‘no’ to keeping the green space, and protecting it for future generations.

But a ‘no’ to residential development doesn’t mean the golf course should stay. As recreational habits change, Wellington’s limited number of active green spaces need to change with them.

The Berhampore Golf Course was opened in 1915, as the country’s first publicly owned golf course. Since then, it’s been staunchly defended by subsequent Labour Party councillors and MPs as the city’s only “working class golf course”.

While it’s protected under the 2016 Town Belt Management Act, the Wellington City Council’s 2018 management plan describes this part of the Town Belt as “poorly developed”.

The plan proposed reducing to a nine-hole or 13-hole course. But each time the option is put forward, including during the 2019 mayoral race and the 2020 general election, it was quickly put to bed, including by former mayor Justin Lester and passionate locals.

Intensified cities like New York and London have fought to keep their precious green space.

Numbers supplied to the Dominion Post under Local Government Official Information and Meetings Act show the Mornington Golf Club has 111 full members. It’s unclear how many of these members play regularly.

Averaged across the year, 7.4 non-members play on the course each day, with no differentiation between those who play nine holes and 18 holes.

Those who pay green fees, rather than the yearly membership fee, do so through an honesty box system.

Meanwhile, the council spends about $150,000 a year to run the course.

Golfers who spoke to the Dominion Post said the course was not known for its great playing, but there had always been strong opposition to replace it with anything else.

Wellington City Councillor Laurie Foon, who lives near the golf course, says Wellington should heed the experience of large cities like New York and London.

Wellington City Council southern ward councillor Laurie Foon said she wasn’t afraid of change, but saw the green space as a real asset to the community.

Once the city started to let that land go, it would be hard to claw it back, she said, pointing to cities like New York and London, which had fought to keep landmarks like Central Park and Hyde Park.

“I would be standing in front of the bulldozer, dare I say it,” she said.

The city needed density to tackle supply and affordability problems. And when that happened, access to shared green spaces would be vital to mental and physical wellbeing.

“I would say: this is a wonderful opportunity for the community to ask what the space can look like to support a densified community,” Foon said.

Greater Wellington Disc Golf Club chair Brady Kuech says the land is so much more than a golf course, but that doesn’t mean we shouldn’t have a broader discussion to identify who the land serves and how things could be done better.

One of the people trying to reimagine how the space could better serve the community is Greater Wellington Disc Golf Club chair Brady Kuech.

Out of a desire to protect the green space from what he calls a “use it or lose it” mentality, Kuech started a 10-hole disc golf course on the land in 2019.

When adding disc golf to the equation, the average number of people who use the course per day jumps to 12.2.

“Most other cities, especially capital cities, don’t have this same access, and to lose any part of this green space would be a tragedy,” Kuech said. “If this land goes to transport or housing, it will never be green again, and we, plus all future generations, will lose what precious connection to the land we have left.”

It would mean no more disc golf.

Like others who had a stake in the area, Kuech suggested a community kōrero on the future use of the land.

“Perhaps if we could define who the community is that we are trying to serve, and communicate with them about what access and use they want, we would be off to a good start.”

The land might not be living its best life, but the Mornington Golf Club is a hive of community activity.

While the land might not be meeting its full potential, the golf club itself was described by many as a hub of community activity.

Aside from the golfers (both disc and ball), there are lawn bowls, bocce, tai chi, play groups and Friday night merriment.

Local chef Angela Stainer, who leases the golf club kitchen, said those in the area were well-served by recreation amenities in the area, including the kids bike track, soccer fields and skate park.

The golf course was also used by those walking their dogs, foraging or accessing nearby mountain bike tracks.

“The very nature of an 18 hole course is a vast amount of green open space, which should be seen as a bonus for a busy city, but too many people with no idea how special this environment is want to ‘fix’ it. In my opinion, it’s not broken.”