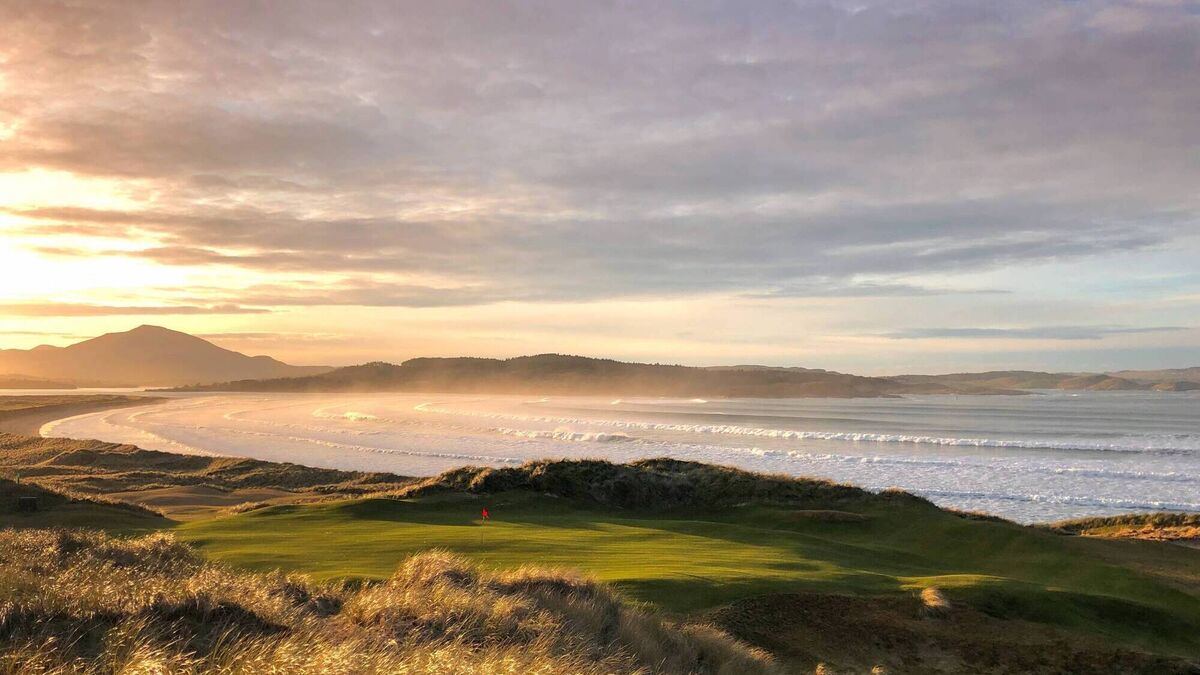 In the months ahead, you will no doubt read about the new St. Patrick’s Links in Rosapenna and hear how amazing they are, how they are changing the game of golf in Ireland and how they are going to make a splash across the various national and world rankings.

I played the course and will not contest any of it. There is a magical connection with fire in his belly and genius in his soul. Ireland has world famous golf courses adorned with the names of iconic designers dating back to Old Tom himself (including Rosapenna), but the names of the modern greats are a little scarce on the ground.

We have an abundance of well-known Irish designers – including the revered Eddie Hackett, Mel Flanagan, Paddy Merrigan and the renowned Pat Ruddy – but the world of architecture is a new generation. Their designs have steered golf course architecture in a more dynamic direction and their names add considerable weight to the inevitable “bucket list destination”.

Many of you reading this may not consider yourself design enthusiasts – I count myself among that group – who prefer to just take a class and do your best. There’s nothing wrong with that, but the opening of St. Patrick’s has a meaning that resonates well beyond the Irish coasts.

Just as golfers from all over the world would travel to Ireland to play the old masters (e.g. Ballybunion, Portmarnock, Royals County Down and Portrush), so will more and more follow the path of the new, modern masters of design. Donegal already has two courses designed by Pat Ruddy (Rosapenna’s Sandy Hills and Ballyliffins Glashedy) but now it has a course redesigned by Gil Hanse (Narin & Portnoo) and the brand new St Patrick’s Links designed by Tom Doak.

The importance of this is enormous: Donegal and Ireland as a whole have now become a far greater attraction for traveling golfers. The name Tom Doak will do that. While Co Donegal has swung nearly a dozen links courses, for many visitors it fell short of the better-marketed Southwest, the obvious Dublin / East Coast hub and the royalty of Northern Ireland. Donegal’s range of Links courses covered all the basics – from old (Bundoran) to new (Sandy Hills), from classic (Port Salon) to bizarre (Cruit Island), from subtle (North West) to muscular (Ballyliffin Glashedy) – but St. Patrick’s adds a whole new layer to the cake and adds another cherry just to be on the safe side.

This is the first new golf course on our island since Cobh Golf Club moved to its new home in Marino Point in 2009. It’s the first new 18-hole Ireland golf course since Doonbeg in 2001. Carne added the sensational Kilmore Nine in 2013, designed by Ally McIntosh, but St. Patrick’s is 18 holes and full of intrigue.

When I first heard about Tom Doak designing an Irish link, I got goose bumps for a week. The revered architects of the old days (Mackenzie, Old Tom, Colt, Ross) have left us with many of the best golf courses in the world and there is no doubt how Tom Doak’s work will be rated in the years to come.

Based on St. Patrick’s alone, it can be said that golfers will cross oceans to play one of its courses. That is the reputation of the man (and his team). He’s designed dozens of golf courses, but I can’t be told that a designer alongside other modern masterpieces (e.g. that’s just the B’s) is not a designer to look for on occasion.

In terms of golf, it could be the same as Antoni Gaudí. And no, that is not an exaggerated assessment. Come and play St. Patrick’s Links and experience 18 holes in one of the most magical landscapes in golf. It feels spacious, open and yet closed, testing but never cruel, adventurous but sensible, creative but conscious. Most of all, it feels subtle and effortless. It even feels obvious and that could be key to Doak’s philosophy of minimalism. Leave the canvas alone and just add the brush strokes that will turn this canvas into art.

St. Patrick’s Links is surrounded by dune land, much of which is not part of the property. As such, the course appears almost lost in endless dunes that only enlarge the canvas.

The Tom Doak course will be the third 18-hole golf course in Rosapenna. The views of Errigal and Muckish, as well as the bay and beaches, are enough to beckon anyone, but with three quality golf courses, a superb hotel, and numerous other golf courses in the area, this is a golfing mecca.

St. Patrick’s design began in 2018, although Doak had ideas for these dunes long before that. On around 320 hectares, two 18-hole courses lay fallow for more than a decade. Designed by Eddie Hackett and Joanne O’Haire, the courses were due to be redesigned by Jack Nicklaus in late 2006. As soon as the project started, it ended and the courses closed. For the years that followed, the only activity was a lonely man, and his mower kept the fairways somewhat shortened. The Caseys from Rosapenna acquired the property from NAMA in 2012 and a new chapter began.

The official “construction” began in mid-2019 and two years later – at the end of June 2021 – it was opened. Doak was able to use elements of the original Hackett / O’Haire courses and what the Jack Nicklaus team left behind, but this is a new course, plain and simple. And it’s a beauty.

What, you ask, is what makes these links so special? There are four obvious elements:

Diversity of holes and landscapes

The towering dunes of the opening three holes hide the rippling fairways, which then flee westward, towards a mother dune, around which several holes snake. These opening holes lead you inexorably to the sea, which comes into its own from the 4th tee. This is the great reveal, the most dramatic moment of many. The view and the sea are thrown in front of you like a deck of cards spread out in a perfect fan. The air bubbles with ozone and sea air. And from the 4th tee you can see what’s coming. Holes 4 and 5 extend along the coast below, while holes 6, 15 and 16 are inland. Take a look at the wide fairways galloping towards this mother dune. Check out these bunkers pocking the landscape like the moon. It combines the craft of the old with the audacity of the new. It’s an adrenaline rush that will make you swing harder than you should.

Elsewhere, further inland, holes crash across the landscape: the par-4 7th, from a high tee, descends between more undulating dunes to leave you with an approach that might be blind while on the short Par-4 8. You see nothing but the tip of the flag. These are the shapes you’ll have to deal with, and while most links courses (even the flatter ones like Portmarnock and Royal Dublin) require repetitive games to fully enjoy, St. Patrick’s is both wide enough and adventurous enough that two of you could play different courses depending on where your shots end.

You will never have played on or around greens like these – at least not in Ireland. Each shape is unique, but it goes further as the greens and their wide surrounds are seamless, with drains, sinks, and bumps galore. The grasses are cut to the same height and that makes the greens appear larger than they are. As such, a “missed” green leaves a fascinating recovery that in all likelihood can be played with a praise, bump-and-run, or putt from 20 meters away. My opening putt was played from this distance and the ball was perfect. I just couldn’t tell where the edge turned green … and neither did the ball.

The 17th par 3 is even more pronounced, where the flag appears to float in the middle of the fairway that extends beyond the 18th tee. It’s an illusion and the first game you don’t know where the green starts and ends. It’s an extra dimension that adds appeal and shows how Doak annoys you … and still gives you opportunities to explore your skills.

Usually they’re generous – the Index 2 Par-4 16th looks a mile wide by the time you’re on the 4th tee – but the endless contours and undulations don’t guarantee you anything. Balls don’t automatically travel to a flat spot, leaving you in different positions. It adds to the challenge, but that breadth also adds to the accessibility.

Torn, raw and ragged and with numerous bunker dunes and waste areas around the site, you are never sure which “bunkers” are natural and which are not. They’re non-invasive, they don’t flood the greens, but they are called hazards for a reason. If you can find one, it is unlikely that you played a good stroke. On the descent from the 4th tee, keep an eye out for the enormous blow-out: it is about 6 meters deep and 60 meters wide. It’s not the only one here.

Certainly an unfair headline. The less dramatic and more inland section (holes 10 to 13) is also fascinating and calls for confident hitting, especially around the greens. However, that goes for every green here.

Roller Coaster 1st is an immediate contender for the best opening hole on the island. It’s a captivating and deceptive tee that leads blindly into a maze of dunes. The green lurks behind a large shoulder and has an amphitheater feel. The sharp par 4 14th dogleg (the only serious dogleg here) slopes down towards the sea before lashing straight to a green above the beach. It promises two dramatic settings. The 120 yards uphill par-3 15th is addicting and requires absolute precision as you head for the top of this mother dune. Overall, however, the run from 4th to 9th steals the show for its brilliant and intuitive design.

There are so many elements that make this place special but maybe I am blown away by the fact that for the first time in 20 years Ireland has a new 18 hole link designed by Tom Doak. It’s thrill-a-minute golf, pure and simple.

The good news for Irish tourism is that many international golfers who believe they have “done” Ireland now have an excellent reason to return while those looking for their next destination have just found it. Irish golfers will also be happy to visit and discover how good the golf options are in Rosapenna. After all, golf has been played here since 1893 and it just keeps getting better.

Golf Ireland members have an online rate of € 75 for each of the three links until the end of October. You can play all three within 10 days for € 195.

Visit Rosapenna.ie for details and bookings.