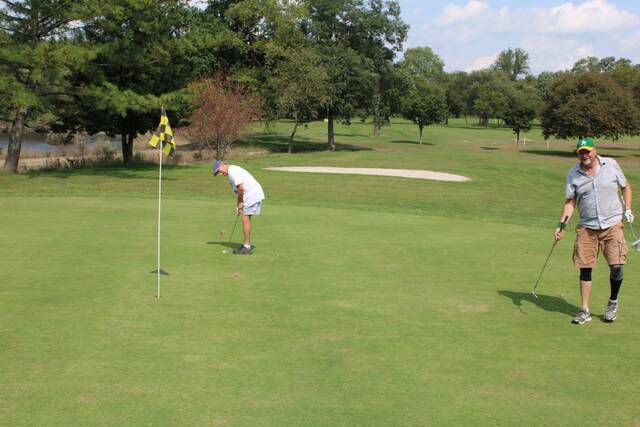 WILKES-BARRE – Hollenback Golf Course reopened Wednesday after flooding in the September 1 storm forced it to close.

The seventh hole was closed, but golfers played the other eight holes on the public course.

“It wasn’t bad,” said Kingston’s Kevin Malloy after finishing the ninth hole. “You did a great job cleaning up the water on the track.”

The tee box was relocated from its usual location, but Malloy and his partner on the course Jeff Dauber from Dorrance enjoyed getting out.

“We’re just happy to be back,” said Dauber.

Some fairways were brown where rainwater flooded the course. It had to be pumped out to make it playable.

Charles Majikes, chairman of the Wilkes-Barre General Municipal Authority, which administers and operates the course at 1050 N. Washington St., commended the workers for the preparation.

“We reconfigured it a bit,” said Majikes.

To save money on the course, which has been a burden on the general fund budget for years, the city signed a three-year lease with the GMA for administration and operation in March. The GMA, which manages the Wilkes-Barre Municipal Golf Course in Bear Creek Township, has the expertise, the city said. The lease stipulated that GMA would pay the city rent in the amount of 5% of the net proceeds.

“It’s been a good year,” said Majikes. Like other courses, it had to contend with rain all spring and summer this year. If possible, the course would stay open year-round but close in snow, Majikes said.

This weekend, Lucerne County will be spraying for mosquitoes, Majikes said.

← Read The Greens Golf Column: Will Salem CC Restoration Project Ahead a 7th USGA Championship? | Sports Golfers are encouraged to play one final round at Parkes Golf Club before redesigning the course | Parkes Champion Post →