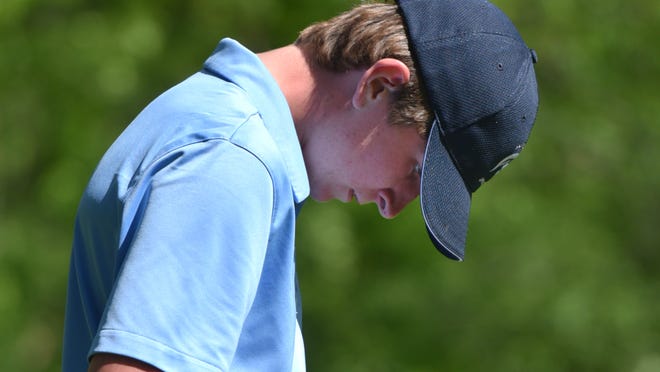 The match was over before it even started.

There were absolutely no stakes.

But don’t tell that to the young, talented up-and-comers on the Livonia Stevenson boys golf team.

The Spartans certainly weren’t playing like it was a meaningless round of golf.

Wayne Memorial forfeited Tuesday’s Kensington Lakes Activities Association-East finale at Fellows Creek in Canton. The Zebras didn’t have enough players to score as a team, and you need at least four scores.

Stevenson picked up the win before any of its players took their first swing of the day. It gave the Spartans a perfect 6-0 record in the division, ensuing them the East championship, just another accolade for them to throw onto the pile of what’s turning out to be one of the best seasons in their program’s history.

So Stevenson, which brought a squad of mostly underclassmen and JV guys, and Wayne’s pair of golfers elected to make use of their tee times by playing a 9-hole match anyway.

And even though the division was already sewed up, there was Kyle Kless, attacking the final hole on Fellow Creek’s South course like the Spartans’ season was on the line. While battling blowing winds and an awkwardly-placed green on top of a hill, the sophomore tapped in a gimme putt from point-blank to make par and end his round on a heater.

“That’s the way to finish,” a parent of one of the players shouted. “What a putt!”

That’s not the first fanfare Kless, as well as the rest of the Spartans, has received this spring.

A week ago, he shot an even-par 36 to become the individual medalist during a divisional dual against rival Livonia Franklin. He, along with Stevenson’s other stud sophomore, Eli Vanderveen, who shot a 37, helped the Spartans edge the Patriots by 14 strokes to not only win the City championship, making them the top team in all of Livonia this spring, but also to record the lowest score for 9 holes in program history (151 strokes).

It was the second school record the Spartans had broken, as they had already shot a 307 to win the Highest Honors Invitational at Huron Meadows Golf Course in Brighton to record the program’s lowest team score for 18 holes. And some of the top teams in the state were present at that tournament, including Brother Rice, which the Spartans edged by one stroke to take home the trophy.

Stevenson’s other three starters led the way during that round on April 30. Senior captains Nathan Bond and Evan Westphal shot 74 and 76, respectively, while sophomore Troy Watson (yes, the Spartans have three sophomores starting!) added a 77.

The squad is heating up at just the right time, especially with the KLAA post-season tournament slated for next Thursday and the Division 1 regional coming on June 1. The Spartans are looking to qualify for the state finals for a second-straight year, which is saying something. Last year was the first time they made it to the state championship since 1998.

“I’m just hoping they can keep their heads on their shoulders and realize they can do it,” coach Curt Hay said following Tuesday’s scrimmage. “They’re starting to get confidence to know that they can compete at that level.”

They’ll have to rely on solid scores from the sophomores if they’re going to make it back to the state final.

But that’s kind of been Hay’s thing since taking over the Spartans nine years ago.

Hay was a pro instructor at Twin Beach Golf Club in West Bloomfield for 30 years.

After he retired, it didn’t take long for one of his old junior golfers to call him up and get him out of retirement. That was former Stevenson golfer Ben Zammit, who was a junior at the time.

The Spartans were in dire need of a new coach after their previous one had stepped down.

“Basically, I said, ‘I’m not doing anything, so I’ll come over and coach you guys,’ and here I still am,” Hay said.

Stevenson’s players don’t have the traditional country club upbringing many of the golfers in the KLAA-West have. Most of them grew up playing on local municipal courses. Not too many of them had private instructors or even a good set of clubs to practice with.

Most of Hay’s freshmen come in pretty raw, but he does his best to coach them up. And, boy, has he done a good job at lowering their scores.

“These kids work hard, and they’re really gelling together and trying to make it happen,” Hay said. “It’s just a matter of them keeping their heads on their shoulders and not getting too nervous (in big matches).”

Kless started golfing with his dad when he was 8 years old. By the time he reached the eighth grade, he was taking the sport quite seriously, even buying new clubs and constantly practicing his game.

He and his dad toured around the area, hitting up all the local Livonia courses and trying their hand at whatever tracks caught their interest.

That’s helped him lower his scores for 9 holes from the 50s in middle school, to the 40s as a freshman and now to the mid-to-high 30s as a 10th-grader.

“It’s good to know your hard work turns into results with shooting lower scores,” Kless said. “Seeing your teammates work hard and watching yourself get better, too, that’s what I really enjoy about golf.”

Vanderveen is a late bloomer, as far as star golfers go. He didn’t start playing until he was 10 years old. He didn’t acquire a private instructor until two years ago.

He first started golfing around municipal courses with his dad and grandpa. Now he’s practicing at Fox Hills in Plymouth as often as he can.

He’s even abandoned playing multiple sports to go all-in on golf, and he used to really enjoy baseball.

“I have just kept getting more and more into it,” said Vanderveen, who’s dropped his scores to the low 80s for 18 holes and the high 30s for 9. “When freshman year came around, I knew I wanted to try out for the golf team, so I got new clubs and really just started getting into it. I kept practicing, training and getting lessons, and here we are.”

And here we are.

The Spartans walk into the KLAA championship at Kensington Metropark Golf Course in Brighton as underdogs, for sure. Northville, Novi, Brighton, Hartland, Plymouth and Canton are never easy opponents.

That competitive spirit is kind of a rite of passage for Hay’s boys.

“Some of the guys have set the bar high and everybody else wants to beat them,” Hay added. “That gets the ball rolling when you get a couple of guys playing good and a couple more guys who want to beat them.”

Hence, that’s why Kless was chasing that par on the final hole of a seemingly meaningless match. No stakes? No, the stakes are showing up and being your best, and that’s what Stevenson has been doing all spring long.

← Sports News Roundup: Soccer-Japan 'sounded out' about hosting the 2023 Asian Cup; Golf-After earning a 'life-changing' LPGA Tour card, Saso set for US Women's Open defense and more A league of their own →