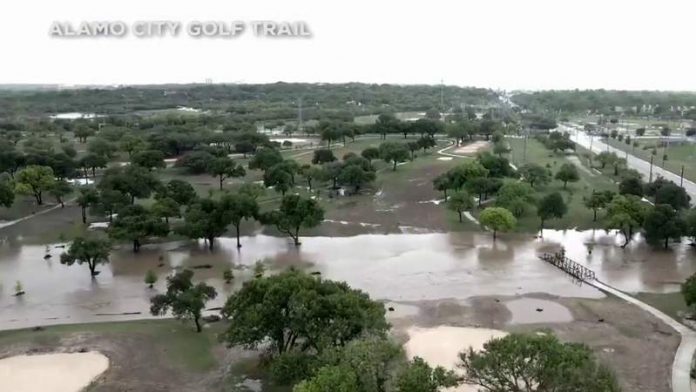 SAN ANTONIO – The Alamo City Golf Trail is working on upgrading the Olmos Basin Golf Course, its clubhouse and the rest of the facilities that golfers can enjoy later this year. Officials say they never could have foreseen the unprecedented severe weather, which resulted in additional costs and setbacks in the renovation process.

The originally planned finish date was around Labor Day. Now the officials hope for sometime in October.

“We are always at the mercy of Mother Nature and Mother Nature is unbeaten,” said Andrew Peterson, President and CEO of Alamo City Golf Trail.

The project started in January. A month later, in February, the area experienced an unprecedented winter storm.

No new grass had been laid yet, but the crews had not been able to work for some time. Then came the floods in May and now a rare wet July.

“If we plant the branches and it rains heavily the next day or so after that, it tends to wash those branches away. So that’s the downside of what we saw in the floods, ”said Peterson.

He added that replanting the branches is not too expensive, but the time wasted replanting it costs money. However, Peterson says the project – costing more than $ 3 million plus costs due to delays – will not cost taxpayers any additional money and will be entirely self-funded.

“We are part of the Alamo City Golf Trail group, which, for lack of a better term, has a management agreement to operate the golf courses in the city of San Antonio. All of the operating revenues we have generated over the past few years will go into this project, ”said Peterson.

Copyright 2021 by KSAT – All rights reserved.